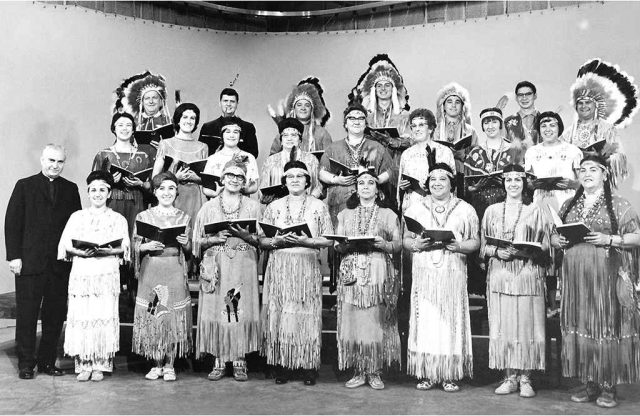 The 22 members of the St. Francis Xavier Church choir got dressed in their best traditional clothing and travelled across the St. Lawrence River to visit Canada’s first, Canada’s finest (CFCF-TV) television station – today known as CTV.

“I don’t remember the reason why, but we were invited to go there,” said Wanda Deer, photographed first from the right in the middle row.

Deer recalled they were asked to sing and that there was a Jewish choir there that day too.

“We learned some of their songs, too, in their language. It was nice,” she said.

The Iroquois Mixed Choir of Kahnawake – today only known as the Mohawk Choir – was officially founded in 1927 by Father Conrad Hauser of the Jesuit Order and was directed by Father Alfred Bernier.

Prior to having official engagements – their first being in 1939, singing in the Kanien’kéha at the High Mass in the Church of the Gesu – the choir did exist, and members performed under the leadership of Louise Jocks and later Josephine Douglas, both blind musicians and organists.

“It started way back in the 1800s and someone translated all the Latin songs, I suppose, into Mohawk,” said Vera Goodleaf, one of the members of today’s choir.

All the songs sung by the choir are in Mohawk language with church music.

During the 1960s when Deer and her husband Walter Deer were part of the choir, they remembered it as being an enjoyable experience.

“I just wanted to be with Wanda,” joked Walter.

“When the choir got together it was happy times,” said Wanda. “We enjoyed everything, and we were a great bunch of people and everybody got along.”

The choir would have practices once or even two nights a week during busy holiday seasons, like Christmas and Easter.

The church regulars would come every Sunday and listen to the choir but during the holidays the church would get larger numbers of people who attended services, said Goodleaf.

Goodleaf, who has been part of the choir for 40 years, was not part of the same generation as the Deers but remembered being aided by some of the most notable singers from the group.

“I had experience singing with the older members who had beautiful voices, like Annie Lahache, Eileen Lefebvre and Esther Kane. When I started out they helped me,” said Goodleaf.

“Annie Lahache was the best singer. She was a soprano and for the altos is was Esther,” said Deer.

The choir also had members who were tenors and basses.

For the men, Deer remembered Earl Saylor singing well, but he would only come to sing for the major holidays and not for the regular Sunday mass.

While many of the members of the choir have long since passed away, both Deer and Goodleaf pointed out that one remaining constant has been the choir director and organist, Bernardin Houle.

“He’d take a bus and walk all the way there to the church,” remembered Walter (see story on page 8).

Over the years, the members of the choir have travelled worldwide together too.

“We went on a lot of trips – to the USA, Israel, Switzerland and Philadelphia,” said Goodleaf.

The Deers fondly remembered the trips the choir would take every Labor Day weekend to the Mohawk Valley in Fonda, New York.

The Mohawk choir can still be seen performing every Sunday during mass at 10:45 a.m.