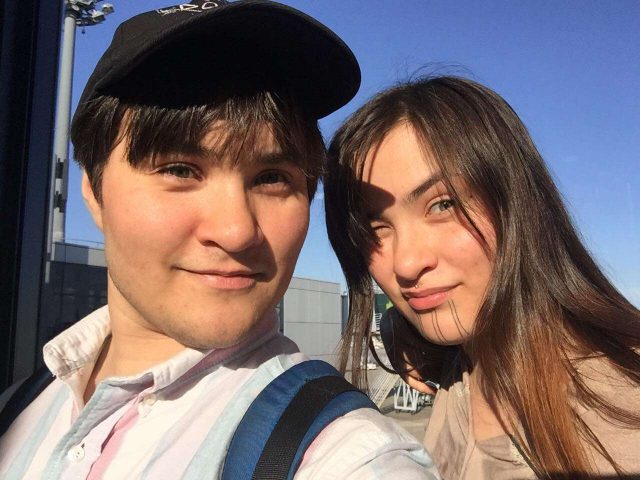 Isaac and Akinasi Partridge questioned why they were asked to leave the quarry, despite their father being from town. (Courtesy Isaac Partridge)

Twin brother and sister Isaac and Akinasi Partridge say they will be filing a formal complaint with the Kahnawake Peacekeepers after a bad situation turned to worse on a troubling weekend at the quarry.

The twins are Inuk on their mother Taqralik Partridge’s side, but also Mohawk on their dad, Ryan “Chucky” McComber’s side.

They came out to the quarry for a picnic and a swim with friends last Saturday, July 21, and everything was going smoothly, until things got pretty heated. It resulted in them being forced to leave after the Peacekeepers got involved.

“We enjoyed about an hour of hanging out on some rocks over the quarry eating, having a great time with our friends, completely undisturbed,” said Isaac.

A switch to a different spot resulted in the group heading back to the location they were at before.

“We passed by a group of older, drunk people. We were met with hostile stares by everyone, and as we walked further, we were shouted at,” said Isaac.

“When we passed the group of people again, one man, slurring his words, told us he didn’t want any of us in “his waters” and to “get the fuck out.” He then started singing the oompa loompa song, in reference to our friends, who are black and brown. We uncomfortably but silently walked to our intended spot, and before any of us could even set a foot in the water, a Peacekeeper, Jeffrey Diabo, showed up to confront us,” said Isaac.

That’s when the group’s day came to an end.

Equipped with only a Medicare card and no other ID, Diabo asked who they were. When they told him they were McComber’s biological children, it didn’t change much.

“Immediately he responded, shocked, “Chucky?” and we said yes,” said Isaac. “He said then that means we’re Mohawk, he even radioed another person on his receiver that the strangers were “Chucky’s kids.” But still he insisted he didn’t know who we were so we weren’t allowed to be there without someone ‘from town.’”

The Eastern Door contacted Peacekeeper assistant chief Jody Diabo, who clarified how the PKs deal with situations like this.

“We actually have officers do walk-throughs because we don’t want kids drinking – and that’s why he was there,” she said, referring to officer Diabo. “We know adults go there and drink, we do.”

She added that the old Bedard Quarry actually is private property, but the PKs tolerate people there, unless they are causing a disturbance or committing an offence.

“He (officer Diabo) did speak to a couple of adults and one of them did actually look like he was drinking, but they didn’t have beer where he met them,” she said.

“They were telling them to leave because they didn’t know any of them were from town. He (officer Diabo) told them he’s not going to make them leave, but ‘these people are not the nicest people,’” said the assistant PK chief.

So, to avoid a confrontation, the group was asked to leave the premises and a taxi was called.

“We were peacefully enjoying our time at the quarry, not speaking to or bothering anyone, and he acted as if we were the problem, telling us we can either do it “their way” or with the Peacekeepers,” said Isaac.

“It was an upsetting and traumatizing experience for my sister and I, to be kicked out and barred from our own territory, while being affirmed we are Mohawk but at the same time told we aren’t allowed to be there – so that essentially means we aren’t Mohawk.”

Isaac said he “understands the need to feel protective of our own territories because of colonization, but calling the cops on your own people and then kicking them out, and being hateful to other minorities isn’t okay at all.”

“It was really scary with these big guys intimidating us, being aggressive and acting like they own the waters.”

“My brother and I proudly identify as Inuk AND Mohawk because that’s exactly what we are. We don’t exist in any other form and we’re trying to simply slowly work our way into reclaiming and reconnecting with that side of our selves that we haven’t had the privilege of growing up around/in, our other cultural context,” she said.

She said the officer’s conduct was “definitely unprofessional and sided with the toxic, aggressive, entitled and violent nature of the drunk men who were allowed to hang out there getting publicly wasted and harassing a group of mostly women,” said Akinasi, adding she wants to file a complaint to raise awareness on issues like this.

“It just blows my mind that we’re not allowed to access our own home reserve and at the same time settlers in Montreal don’t give us a break either when it comes to dealing with every day racism,” she said.

“It’s totally just embedded in this toxic masculinity/aggressive dominance and the idea that when shit goes down it’s always the fault of the people who were “in harm’s way” (aka just trying to exist) and victim-blaming,” said Akinasi.