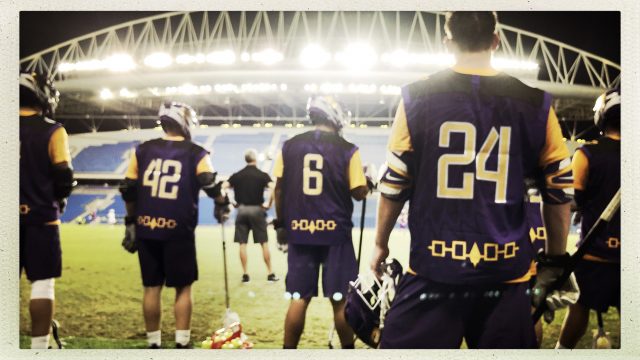 The Iroquois Nationals third-place finish proved the team is solidly one of the world’s best field lacrosse teams, but the finish could have been even better with the US and Canada beatable. (Courtesy Tracy Rector)

The Iroquois Nationals made it two medals in two tournaments after nabbing a bronze at the FIL World Lacrosse Championships that wrapped in Israel on the weekend.

The Nationals dropped a tough semi-final match against Canada last Thursday, setting up a third place showdown against Australia Friday.

The Nationals made sure to jump on Australia early, with Ty Thompson and Lyle Thompson opening the scoring, before all-world young phenom Austin Staats scored twice to end the period, after Christopher Robertson got one back for the Aussies.

Austin had another in the second to cap the hat trick, as did his brother Randy Staats, who scored two to help the Iroquois to a 9-3 halftime lead.

So, the big question remains, who’s the better brother?

“He is. He got all-worlds,” said Randy with a laugh. “He had a great tournament and is a really good player. He’s young and he’s got a lot of talent. I was surprised at how he handled himself. He fit right in with the men and that’s awesome to see at such a young age.”

Australia made a game of it in the final two frames, outscoring the Nationals 4-3 and 5-2, but the Iroquois held on and won 14-12.

The Iroquois have now come home with bronze in back-to-back world championships, but the talented players know the colour of the medal could have been different with a bit more preparation leading up to the games against the big guns: Canada (silver) and USA (gold).

“We took it as what it was,” said Iroquois faceoff man Jeremy Thompson. “Obviously going up against the US in the first game, we had a good performance, but it didn’t end well. I think we still have a lot of learning to do as an organization, as a confederacy and as a team. That comes around to evolving from our past teams that grew over time.”

Captain Randy Staats knows that tightening up on both ends and being more consistent would have had a major impact.

“I think we’ve got to limit our mistakes, honestly,” said Randy. “Sometimes we throw the ball away or take a penalty, and that’s all controllable. I really stressed that this tournament, especially being a captain and trying to set an example and lead.”

Staats admitted he had a few missed scoring opportunities and errant passes, and knows his team can beat the US and Canada.

Iroquois goalie Warren Hill showed this tournament he’s among the best in the world, and the Nationals have some quality long poles, but the team needs more players willing to sacrifice offensive glory to keep the Canadian and American snipers silent, Randy Staats added.

“We need more people like Tyson Bomberry and Jerry Staats, and the stay-at-home D guys to anchor our back end and help Warren out,” he said.

Kahnawake’s Oran Horn made his debut for the Iroquois this year and he knows the team needs to start training earlier to develop chemistry and familiarity with each other.

“I think it would have been a little bit better if he had a little more preparation,” said Horn. “We only got together twice as a team before we got there, so that played a factor. It’s still a talented group we got there.”

A delay in getting to Israel, as the Haudenosaunee passports the players carry was at first questioned by Israel, meant little prep time overseas.

Essentially, Israel wanted assurances from Canada that the team could travel there before allowing visas. It meant the Iroquois Nationals got to the tournament later than all of the other teams.

Thompson said the team already has plans to play earlier, and start prepping for the world championships in 2022 in Coquitlam.

“We’re going to try to keep this team together,” he said. “Get back together in the fall time, and we’re going to play a game every fall and summer and just get the rhythm together with the guys.”

Thompson spoke about playing in Israel despite some calling for the team to boycott the tournament, due to the ongoing conflict between the Palestinian and Jewish populations.

“I totally respected that in the chiefs and clan mothers support of us not going, because that’s their job when they took that position, and the chiefs told them you’re not to send them in harm’s way, that limited them to one answer,” said Thompson, who played with his brothers Hiana, Miles and Lyle on the team.

“I just dwelled on some of the things that lacrosse has taught me, how it’s benefited me and how it’s a medicine game, and how it’s been to heal people… Just by us representing maybe it would help people in some way.”

The team took a day off to visit Jerusalem, and see the iconic Wailing Wall, Dome of the Rock and other sites in the ancient city, which had a deep impact on Jeremy Thompson, who connected his own spirituality with those in the region.

“There was a lot of emotion there when everyone was praying,” he said. “It was pretty uplifting.”

The reality in the country and the at times traumatic stories that make the news do not always match. Jeremy Thompson left with an overall positive experience.

“It’s always a pleasure playing for the Iroquois team,” he said. “Getting to do it over there, and not knowing what to expect, hearing all the news, and then once you get there it’s definitely a different place, but it’s beautiful.”