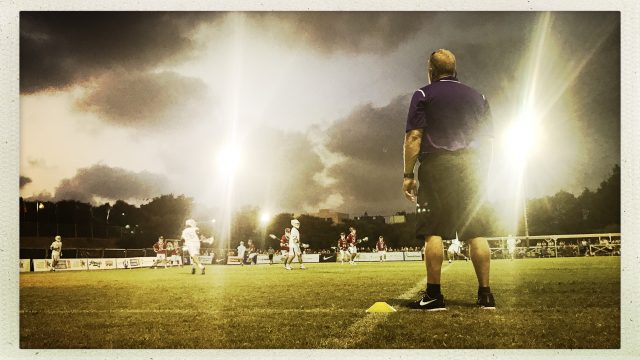 The Creator’s Game is more than just a sport for the Haudenosaunee, who know what it means to compete under their own flag and with their own passports. (Courtesy Tracy Rector)

After a delay due to proudly using their own passports, the Iroquois Nationals finally made it to the big dance and won bronze –third in the world, once again, in field lax.

And with that, it brought a heap of pride to our communities. Us, a tiny collection of six small but powerful nations, taking on the world.

But now we will say it here and say it loud – we expect more. That’s just how sport is.

The fact this team is so heavily steeped in politics it can never just play the game, means every move comes with much more pressure than any other nation.

It is, after all, our game.

Twenty years ago, it was an amazing feat to even finish fourth, but the talent pool in our tiny Haudenosaunee Confederacy – compared to the millions of people in any other given country – has basically caught up to our opponents.

With players like the Thompsons, Tehoka Nanticoke and Austin Staats, not to mention the old guard who are now helping to coach or manage the newer generation, the Iroquois Nationals are world class; now they need to up the ante and own their rightful place at the top of the Creator’s game.

Politics aside – for now – it comes down to money, practice and discipline.

The team got together a couple of times to familiarize themselves with each other for this tourney, but that’s not enough.

They need more hard, structured practices that challenge them as much as the US or Canada always do.

They need to prepare much earlier, that’s a given. They need dedicated space, much more money and flexibility, and they need to push hard to beat the US and Canada consistently.

They also need to select our best players, regardless of political leanings or that dreaded word blood quantum, as a few notables were left off the team – there’s that word politics again.

The window to catch the US and Canada is now. The Thompsons are in their prime, the team is chock-full of the best talent it has ever had, and the gold is there for the taking.

The excuse given for the World Lacrosse Championship is it’s not box lacrosse – something they all grew up playing, and are, frankly, better at.

However they had a chance in the heart of Onondaga Territory a few years back, in the box at the World Indoor Lacrosse Championship, and although they were awesome – winning silver – they lost a golden opportunity.

They had caught up to the big boys, but they were hesitant to shoot at times. Their passes were errant. Then there is the penalty box – our local teams know the effect that has on a team if you can’t stay out of it.

They, for whatever reason, missed their best opportunity to beat their long-time colonial foes.

But there will be another time.

And one day they will win gold, in both field and box.

We’re not trying to downplay the sweet bronze medal, not at all. It’s an amazing accomplishment of such a small pool of players to achieve.

Now is the time, this time is ours.

Fans – Native and non-Native alike – want them to win.

Even if they beat Canada or the US for gold on the field or in the box, people who understand the history of the game and the destiny such a coveted win would bring, would surely cheer them on.