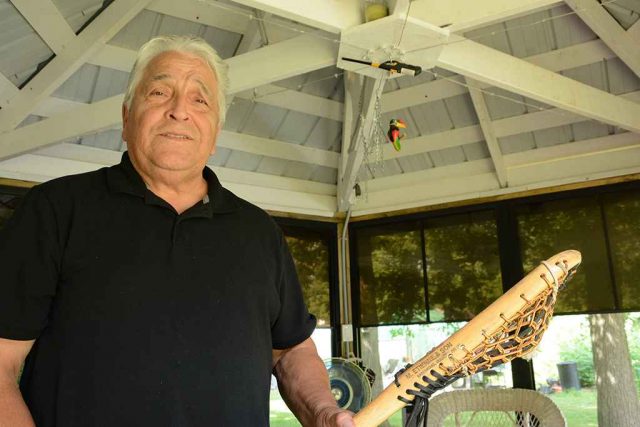 Joe Curotte played with some of lacrosse’s greatest legends, and his stay-at-home, be consistent defence led him to the Ontario Lacrosse Hall of Fame. (Daniel J. Rowe, The Eastern Door)

“My job was always to defend the fastest guy,” said Joe Teiorakwate Curotte.

The Ontario Lacrosse Hall of Fame announced July 3 that the defenseman’s defenseman would be among the class of 2018 inductees into its hallowed halls this November.

Around three years ago, Curotte got wind that a nomination might be forthcoming. A call a month-and-a-half ago informed him to keep November 10 free.

“I was wondering if that was ever going to come through or not, but I guess it did finally,” said Curotte.

Curotte said the honour is more in knowing he will join a fine group of laxers many of whom he played alongside.

“I’m honoured, that’s all I can tell you; more so honoured by the fact that there were a lot of other guys before me, who were very good players who I played with. That’s more of an honour, having played with those guys,” he said.

Curotte played for both the Junior and Senior Caughnawaga Indians from 1965-1980 along with fellow legendary hall-of-famers Gaylord Powless, Mike Benedict, George “Pidgie” Norton and Louis Tewenhni’tatshon Delisle. He was named Best Defensive Player as a Junior in 1966 and 1968 and as a Senior in 1976.

“He was a very stable defenseman,” said Walter Deer, who played attack with Curotte. “He was always there. He never swayed either way and you could always depend on him doing his job in the defensive zone. I was very happy to be playing with him for many years.”

Curotte will be 71 in the fall, and spoke about playing for the senior team before graduating from the junior ranks.

“Our home rink was the Montreal Forum,” he said. “I hadn’t turned 18 yet and I made the senior team.”

Curotte recalled 1969 when Kahnawake hosted the President’s Cup in Chateauguay. At the time, it was a one-round playoff pitting the top in the east and west against each other.

“We lost the first three, won the next three, and went into the final game,” he said with a smile. “Someone’s got to win, and someone’s got to lose. We lost by two goals.”

The Indians lost to the Nanaimo Luckies that year.

Curotte was humble and frank about his role on the team. He wasn’t the one getting the glory after scoring a goal, but the one who took the burden of making sure his team didn’t surrender one.

“I defended more than anything else. Never was on the power play, that’s for sure. We had too many good scorers,” he said.

After hanging up his stick as a player in 1979, Curotte went on to coach, manage and own various teams over the next 20-plus years.

He helped Kahnawake enter the Quebec Junior league, and coached a legendary team to the Founder’s Cup national Junior B championship in Baie Comeau in 1980.

“I had some excellent players. Barry Alfred was one of my stars on there,” said Curotte. “I had the Goodleaf boys and a couple of Sky boys. A lot of great players.”

A six-week layoff between a regular season, where his Junior boys lost a total of one game, and the playoffs made all the difference at the big dance.

“The boys kept hitting the ceiling,” said Curotte. “We were competitive, but you’re not in the rhythm of things. Still, we did well.”

Comparing playing then to now, Curotte noted the offence-defence style as a major change he did not like at first, but has grown to appreciate.

He mentioned another rule that made the game then drastically different to now.

“When I played in the beginning, there was no 30-second rule,” said Curotte. “You had to play the whole floor, and you had a lot of guys that had to hold onto the ball pretty well, and they were creative. It was tough to play that.

As soon as the 30-second rule came in, that changed the whole game. It sped it up for good.”

The hall of fame ceremony will take place November 10 at 6:30 p.m. at the Marriott Gateway on the Falls Hotel in Niagara Falls.