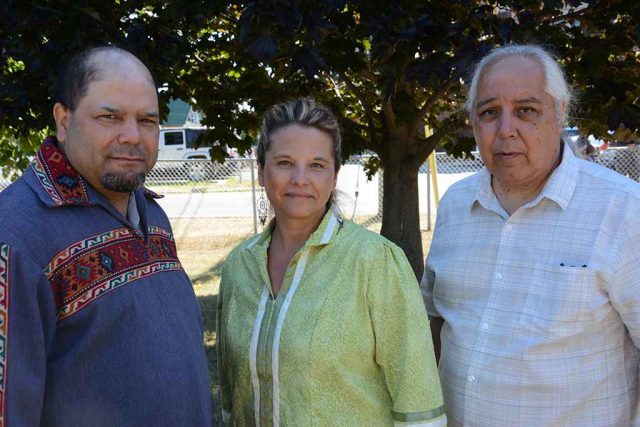 Harry Rice, Tonya Perron and Ross Montour are all first-time chiefs at the Mohawk Council of Kahnawake. Perron enters as the highest vote-getter at the election. (Daniel J. Rowe, The Eastern Door)

July 7’s Mohawk Council of Kahnawake election followed, almost to a T, the rule of three.

Three candidates were elected to council for the first time, three chose not to run for another term, three former chiefs won seats again, and three who sat on council last term lost their bid for another three years.

After 1,207 votes, it was the most drastic change in council makeup in MCK history, with six seats (more than half) being occupied by those who were not there from 2015-18.

Running in her first-ever election, Tonya Perron garnered the most votes with 770, 61 more than second-place Sky-Deer, who won a fourth term at the table.

“I was pleasantly surprised,” said Perron. “I’m excited about this new position. I’m thrilled that the community is behind me as much as they were. I was surprised and shocked by the numbers, but a good surprise and a good shock.”

Also in his first election, Harry Angus Rice got a seat at the table with 395 votes, and Ross Montour rounded out the list of 11 with 374, six ahead of incumbent Billy Diabo, who was not re-elected.

“I’m exhilarated by the opportunity I have been given,” said Montour, who lost his bid in 2015 by 77 votes. “The race for change can be a very tight one, as it was in this case, and perhaps that is the way it ought to be.”

Montour cited lands, membership, and the justice system as areas he is interested in working on in the coming term.

“When we pass laws, they should never have to be tested in a Canadian or a Quebec Court,” he said, who added his enthusiasm for working in language revitalization and education.

Perron must now close up her legal shop, and refer all files related to her work as a lawyer in the next two weeks.

“I’m really looking forward to getting all of that in order, so I can focus on my new position,” she said.

When a new face gains a seat at the table, sadly, someone will not be there that once was.

In addition to Billy Diabo (368), Bobby Patton (361) and Martin Leborgne (337) were narrowly defeated in Saturday’s election.

Diabo, who served two terms at the table, was at peace with the results, and is grateful for the experience.

“I thought it would bother me more than it did,” said Diabo. “It was a learning experience right to the final day and I loved it.”

Patton also served for two terms, and is putting a positive spin on the results.

“I was upset at first, but I’m looking at this as a positive thing for me, not a negative,” said Patton. “I’m looking at it to start a new beginning. I’m going to move forward, I’m pretty resilient.

“I did what I did for the community. I always had the community’s best interest at hand. I’m kind of disappointed at the results, but, at the end of the day, and after the votes were read out, I had an overwhelming response from community members thanking me for the service and everything I’ve done.”

Patton added that being away from the table will give him time to mourn the loss of his mother Beverly Patton, who passed away in January.

“I find when you’re in a position like this, a lot of the time family suffers,” said Patton.

“You get lost, and put all your effort into the community. I look at it that I’m going to start healing. I never got a chance when my mom passed away… I never really had time to look after myself and start the healing process.”

Diabo encourages any with a heart for service to consider running for council in the future.

Back at the table:

Mike Delisle and Lloyd Phillips both ran for council grand chief in 2015, and lost to Joe Norton, but spent just one term away before running and being elected again by a wide margin.

Leborgne remembers well the feeling of losing an election, and tried to remain humble heading into Saturday.

“You always have that, I don’t want to be confident because the higher you feel, the deeper the fall,” said Leborgne. “I lost the last time I ran and it’s very humbling to having been there, and then being out. I feel for the guys that are out… In a way, it feels personal, but you get over that – I did anyway – very quickly.”

Leborgne’s hope for the next term is simple.

“I just hope that we have a productive council that we all get along to the betterment of the community,” he said.

Three spots were open before Saturday after Christine Zachary-Deom, Arlene Jacobs and Kenneth McComber decided against taking another run at a seat.

“That’s the shock,” she said. “It makes me wonder what I’m going to do?”
Zachary-Deom did not have to wait long, as she got a call Monday morning to replace council grand chief Joe Norton at an official function in Montreal.

“I thought, so much for being free,” she said with a laugh.

Zachary-Deom advised new council members to be unafraid to go out and do different things. In addition, convincing others to see your way is not always the easiest.

“It’s very hard to convince people to do what you want,” she said. “That’s the hardest thing about being on council. You can’t get them to do immediately what you know is the right thing to do.

“Good luck on that.”