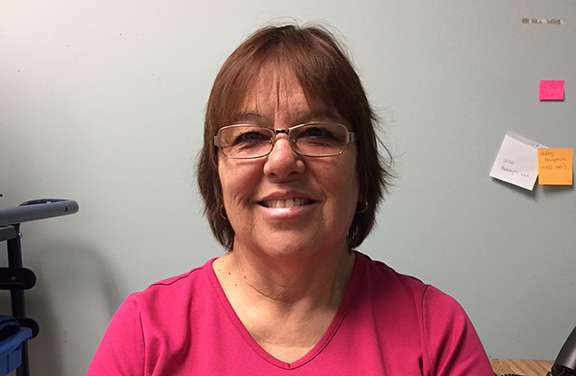 Fran Montour is ready to say good-bye to teaching, for now after over 35 years. She hopes to return to Kateri School each time she starts missing it. (Mehanaz Yakub, The Eastern Door)

Fran Montour has been teaching grades one through six – but never three – for over 35 years. Come September, it will be the first time, in a long time, she won’t be feeling the mad rush of a new school year approaching.

“It’s sad to see her go but she has to move on. She needs to continue her life, her journey,” said Francine Chapman, Kateri School’s counsellor.

At 60 years old, Montour is retiring from her teaching position at the school.

“I feel like I’m too young to be retiring but my husband is already retired so I want to be able to enjoy life,” she said.

Montour started her teaching career in 1981, after graduating early from McGill University with a bachelor’s degree in education.

“Originally I really wanted to be a psychologist,” said Montour. Soon, though, she was turned off from the profession after realizing that it might take a little longer than she hoped to complete her schooling.

The sharp turn in direction in what she wanted to be did not faze Montour. In fact, it was an easy jump from psychology to education, and one with a particular goal in mind.

“I wanted to give back to my community – that was very important – so I figured ‘hey teaching,’” said Montour. “You still have to use psychology to get to the students and that’s one of the first things I learned.”

Tricia Goodleaf has a unique relationship with Montour. She was her sixth-grade teacher, but now her colleague.

“I know I asked to have her that year. I thought she would be someone good for me as a student,” remembered Goodleaf. “She was always fair and consistent, but strict in a way – but in a caring way.”

Years later, Goodleaf found herself working as a teacher assistant at Kateri School, but it was Montour who encouraged her to apply for an available teaching position at the school.

“She recommended me to be a teacher and she gave me a really nice letter,” said Goodleaf.

Eventually, she got the job and Montour guided her during her first year of teaching, acting as a role model.

Montour said she is ready for the next generation of teachers to come over and “strut their stuff,” but she admits there are certain things she’s going to miss the most — namely bringing Kanien’kehá:ka culture into her classrooms.

“I actually wasn’t brought up with the culture, I was bought up Catholic. So, I didn’t know any thing about my own culture, so I felt bad,” said Montour.

A colleague invited her to the longhouse, and she started learning more about her culture and then teaching it to her students.

“What little I know, I’m taking it as my responsibility and bringing it to my students so now their responsibility is going to be to be carrying it on to their little brothers and sisters, with their children who have children, so I think that’s what I will miss doing here,” said Montour.

She’s also going to miss all her coworkers and friends she’s made over the years.

“We’ve laughed together, we’ve cried together…we argued together,” Montour added in a whisper. “But it keeps everything going.”

Montour is a big fan of the Amish culture, which was the theme of her end-of-the-year party. Visiting their community is first on the to do list for her once the finishes her last days at school.

“I’ve been to Lancaster Pennsylvania, which is Amish country, for the past 10 years, every summer. I’ve been to Ohio, Indiana, and we made friends with a family near Rensselaer Falls so we go there quite often,” said Montour

She said she’s ready to visit her friends whenever she wants to now.

“Retirement won’t hit me because teachers always get time off during the summer. Maybe in the fall, that’s when I’ll feel it,” said Montour.

“But then I know what I can do. I can just come in through the school doors and say, ‘where do you need me? Send me where you need me.’”