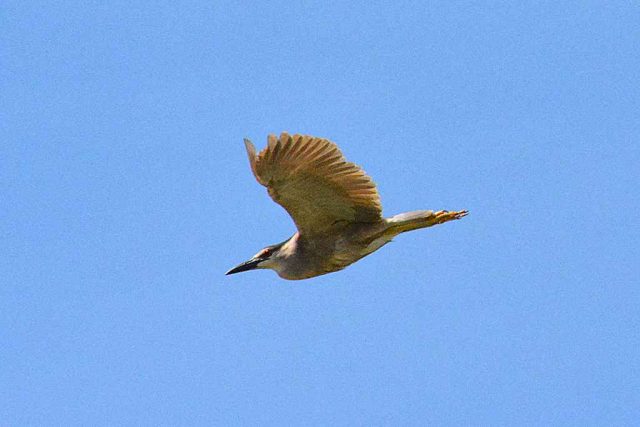 The marsh monitoring program spotted 34 species including the impressive black-crowned night heron, but just one of the five focal species the crew was hoping to hear. (Daniel J. Rowe, The Eastern Door)

A team of four was in Kahnawake’s marshlands Tuesday listening for feathered friends targeted in the annual marsh monitoring bird study.

As part of Bird Studies of Canada’s project Alison Hackney and Mike Beaupre joined Cole Delisle and Louisa Phillips, who are summer students with the Kahnawake Environment Protection Office (KEPO) to listen for five focal species, and note any other birds they see.

The team recorded a Virginia Rail this year, but were unable to hear or see the Common Moorhen, American Coot, Pied-billed Grebe, Sora or Least Bittern, which is classified as endangered under Canada’s Species at Risk Act.

In addition to the Rail, the team also recorded 34 other species in the study.

Touring the wetlands, listening and watching for birds gave Phillips a broader understanding of the ecosystem on the territory.

“It’s very important to know that we have these areas in our community, and just to keep it clean and conserve the wildlife that’s here because you don’t always see them in the town,” she said. “You have to go out and look for them.”

Delisle agreed, and added that visiting different sites and listening for birds is exciting, but also somewhat frustrating when considering the bigger picture of environmental damage.

“Every site we go to combined with the surface water monitoring (we learn) all the wetlands are in decline,” said Delisle. “We’re seeing a lot more invasive species, a lot more fill in.”

One invasive plant that Delisle noticed having a negative affect on the wetlands is the invasive phragmite or European common reed, a perennial grass (like a bulrush) that spreads quickly and releases toxins from its roots into the soil and hinders other plants growth.

“One area where it’s all cattail marsh and you hear the birds, and you go to the next spot and it’s all the phragmites, and it’s nothing. It’s completely quiet,” said Delisle.

Working with environment protection has given the summer students a unique chance to do a job that has few rivals in Kahnawake.

“It seems like every day we’re doing something different: water monitoring, rec bay, pollinator garden, this marsh monitoring, going out with different consultants,” said Delisle. “It’s good to come out to the different areas in town you normally don’t get to see and start to pick up signs from the different birds.”

“Even driving around town looking at the ash trees and all that, it’s just like, ‘oh god’ constantly. It’s really stressful,” said Delisle.