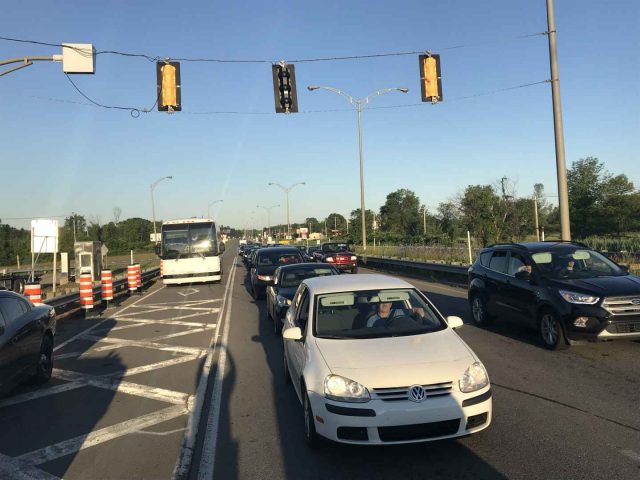 That long line of cars could have been dealt with a little better according to some monitoring the situation and knowing that the blitz period on the Mercier Bridge was bound to cause massive traffic issues. (Courtesy Jennifer Stacey)

Kahnawake Peacekeeper Jen Stacey has never worked a summer without having to help control the traffic during a Mercier Bridge work blitz.

On the job for six years, Stacey said the transition this year was extremely difficult.

“The first day was the hardest because people didn’t know what to expect and they were not prepared,” she said.

That lack of preparation was due to the fact the Ministere de Transport du Quebec (MTQ) only held a meeting with some of the stakeholders less than a week before the bridge was reduced to one lane in each direction for two months.

“It’s disappointing and mind boggling,” longtime Montreal traffic consultant Rick Leckner said. “It didn’t really have to take a week-and-a-half of misery to take action. They (MTQ) knew long beforehand what would happen. It’s unacceptable that people had to suffer this way.”

The Kahnawake Peacekeepers were ready for the increase in traffic, as the department added three officers to the morning rush shift solely to deal with the traffic and keep the roads in the community flowing.

David Lahache is the MTQ Liason / Project Technician at the Mohawk Council of Kahnawake, and monitors the heavily-used Mercier Bridge/Kahnawake and Montreal Area Traffic Facebook page. He has been working on traffic issues relating to the Mercier Bridge since the first big closure in 2009.

“We were first made aware of the summer work blitz in the fall of 2017, in a joint meeting on traffic,” said Lahache. “We told them (MTQ) that we need to sit down and talk mitigation measures. For one reason or another we only had a first  meeting to discuss it on June 18, and the work began on the 22nd.”

As a result there were delays for drivers of up to two-and-a-half hours on the first full day back at work on Tuesday June 26.

“They certainly could have avoided a lot of the pain,” Leckner said. “But now they’re in a panic mode.”

That panic was evident when the MTQ agreed to an emergency meeting with the South Shore mayors on Friday June 29 to come up with new measures to mitigate the traffic.

“It took the MTQ longer to get there and the mayors of the surrounding communities got them to the table,” Lahache said. “But the mitigation measures that are being implemented now are the same as the ones that were in place for the federal bridge works.”

Measures include a truck ban towards Montreal during the morning rush from 5-9:30 a.m., and towards Kahnawake between 3 and 7 p.m.

“Now the delays are 45 minutes to an hour,” Lahache said. “Also the fact that people have adjusted their travel times. People who leave home usually at 6 a.m. now leave at 5.”

Free bus rides have been offered all of this week from Chateauguay.

“There’s more busses and there are more people on them, and I think it’s been worth their while,” Officer Stacey said.

The MTQ will not necessarily commit to those free rides beyond this week.

“The buses and the Montreal-Candiac train line are free for now and will be reevaluated,” said Benoit Lachance, a spokesperson at the MTQ.

When asked why the MTQ waited so long to consult with the partners affected by the Mercier work blitz, Lachance said the MTQ did what they were supposed to.

“We knew it would be difficult in traffic, and we never hid that,” he said.

Leckner agrees that it was always going to be difficult based on the last nine years of major works. But he says the MTQ doesn’t do nearly enough.

“They’re not as proactive as they can be. They don’t consult adequately with other stakeholders,” he said.

The Mohawk Bridge Consortium is carrying out their work to make the major repairs on the southbound Quebec portion of the Mercier. A portion that the MTQ announced 15 months ago would be replaced. Lachance said that will only happen when the work on the Turcot and Louis Hippolyte Lafontaine tunnel is complete. He was unable to pin down a date for that project.