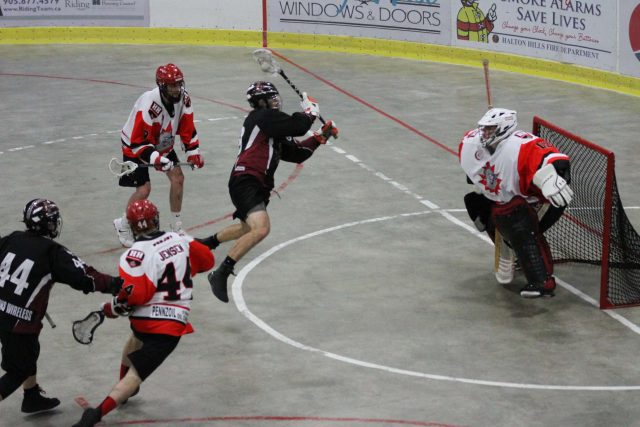 Troy Lauder and the Kahnawake Hunters flew at the Halton Hill Bulldogs and sent them packing in three straight. Now it remains for the boys in black and burgundy to test their quality against the Green Gaels of Clarington starting tomorrow night. (Courtesy Kahnawake Jr. B Hunters)

The Kahnawake Hunters closed the doors of round one of the OJBLL playoffs on the weekend as they defeated the Halton Hills Bulldogs in three straight games.

Kahnawake took a two-game advantage at home on the road after last weekend, and the Bulldogs had home turf against the Hunters but ultimately were shut down 11-8 in game three, and lost the series.

Forward Kraig McGowan was happy to sweep the bulldogs and now head to round two.

“Round one sweep against Bulldogs felt pretty good, all our men pushed it to their limits and then some. The final game was a close in the beginning but after we started to get our focus, we led the game,” said McGowan.

The Hunters play the Green Gaels on Saturday.

“The Gaels are going to be a tough battle, but nothing like our men have never played before and I believe it’s going to be one hell of a series but the Hunters are coming out with the win,” said McGowan.

The Hunters are ready to face their next challenge.

“It’s always awesome to go undefeated whether it be in the season or a series, it also stood as a statement to the rest of the league that we are here to stay,” said forward Troy Lauder.

Head coach Garrett Cree was happy to win the series.

“We played a hard fought game and we play every game to win,” he said. “We just have to stick to the plan. We’ve been learning as we go and it seems to be working.”

Cree is determined his team will take round two.

The Hunters are on the right track as the team was almost unstoppable in the first round.

Kahnawake beat the Gaels of Clarington once this season 7-5.

Although they won in the regular season, the team knows playoffs are a different ball game.

“The Gaels are and have been a great organization for years, but all great things come to an end eventually. Needless to say, the Gaels will be hunted,” said Lauder.

The Hunters get to take a breather before the series against the Gaels. The series begins tomorrow at 7 p.m. at the Sports Complex.

The first two games are in the Hunters’ home barn, and final three in Clarington.