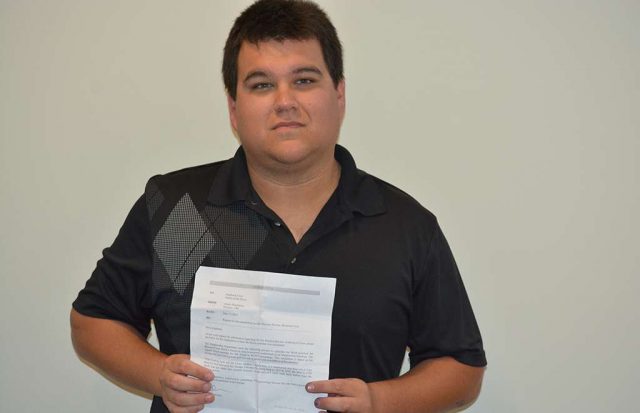 Bronson Cross’s blood quantum was below the bar, and he was denied an appeal to run for Mohawk Council of Kahnawake chief. Cross is disappointed, but accepts the judgement.

In the end, Bronson Cross was deemed to be 46.88 percent Kanien’kehá:ka, which wasn’t good enough to run for Mohawk Council of Kahnawake chief.

Cross lost a spirited appeal, which was announced on the same day as Candidates Night on Wednesday, that saw him shut out of a process he’s still allowed to vote in.

The two differing processes of the election law and membership law have created a sort of two-tiered acceptance of Kahnawa’kehró:non.

Cross was obviously disappointed, especially one paragraph that that read “…the other to 1780 which was not taken into account because of the person’s birth went back further than the colonial period.”

He was still trying to figure out what the colonial period was, exactly, and had not received an answer by Thursday this week.

“From the beginning it was never about the vote,” he told The Eastern Door. “For me it was about trying to assert something I believe in and that’s the right to challenge and the responsibility to speak up on these matters.”

“From my understanding, I’d have to go to the KLCC (Kahnawake Legislative Coordinating Commission) and propose an amendment to the election law, and to have it reflective to the membership. Everyone realizes there are discrepancies between the two,” he said.

“But at this time I have to accept the judgment of the court of Kahnawake.”

Electoral officer Angus Montour was unclear on what colonial period meant as well.

The results, however, were straightforward.

“I figured because it was already established that he was under 50 percent, they weren’t going to change it now,” Montour told The Eastern Door.

“I mean, what are they going to do? Stop the election? If they let him be a candidate, what’s that going to change? It’s going to change the whole process back over.”

“I was electoral officer in 2004, it was one of my recommendations. You gotta do something about this membership law because that’s screwing up everybody. It’s still the same,” he said.

Back then, Montour proposed 51 percent to qualify to run.

“One percentage point makes a big difference. All of the ones who are at 50 percent, well, no more good. Fifty-one percent and over – it would solve a lot of problems,” he said.

“I really don’t have an opinion on that (50 percent requirement) because I have to use whatever rules are given to me. I can’t say I don’t believe in that or I want to change this,” said Montour.

Before Candidates Night started, Montour reminded the audience that everyone who was up on stage deserved to be there, running for office, and to be respectful towards everyone.

A couple of candidates’ eligibility have been questioned because of the 50 percent rule, but they were all vetted through the same process, having to meet seven criteria, including being ordinarily resident, to declare all private business holdings and candidates must not have been convicted or sentenced within the previous six years – a time period which only comes into effect six years after the sentence is completed.

“I have empathy for Bronson, a smart young man, but he’s on this side of the fence. He wanted to jump but he can’t because it’s a solid wall right now,” said Montour.

Diabo went to Candidates Night during the second half of the night, and posed questions about transparency and accountability to those running for MCK office.

“Showing up wasn’t about me, it was about trying to show the other candidates who are going through this process respect,” he said.

He was warmly received and of the three questions he asked, none concerned blood quantum.

It was but one of four appeals/complaints, three of which have now been resolved, so to speak.

Landon Meloche was allowed to run weeks ago after initially being deemed ineligible, due to a conditional discharge after a guilty plea in making a false document when he was a Peacekeeper.

The PKs didn’t have the correct information when the nominations were first run through, and after it was received, and the appeal vetted, Meloche was back on the list of potential MCK chiefs.

Janus Cross also filed a complaint against Montour, but she lost, like her cousin Bronson, both with the same blood quantum.

“Janus Cross had the opportunity to be nominated and the procedure would have been followed to determine her eligibility to run but this is not the case,” the decision from justice of the peace Stephanie Cross reads.

Cross spoke to The Eastern Door and was obviously not happy with the decision.

“It’s unjustified due to the fact I was told not to go (to nominations) cause they would not allow me to be nominated,” said Cross. “I’ve asked for a special poll – bring it back to the people were the decisions belong.”

“In the letter Angus Montour sent regarding my complaint and appeal letter he left out the fact he said as long as I’m listed I should be able to run, to call him back. I did and he said ‘no they would not allow me to be nominated.’

“He also questioned my accountability and my understanding, where I believe he crossed the line,” she said.

“You have to go from being nominated to being a nominee,” Montour said he explained to Janus Cross. “And to do that, you have to meet all seven requirements. She told me she’s 46 percent and she had two great grandparents – would she be able to run?

Cross was not present on nomination day, but Montour said it would have been the same result after he would-be nomination was investigated. She filed her appeal 17 days after the May 24 nomination process.

“She could not comprehend the difference between nominated and nominee,” he said.

“You could be nominated 25 times if you want, it still won’t get you past the requirements.”

There is still one decision left to be made – Watio Lazare filed a complaint concerning Joe Norton’s nomination process, and The Eastern Door will have that full updated story next week.

“You’re stepping out of your comfort zone and from that comes a lot of uncomfortable situations,” said Bronson Cross.

“It means we’re all just numbers in a system that’s not favourable to us,” said Cross. “It’s a law, a policy, but as we’ve seen in history, laws are meant to be challenged, questioned – laws aren’t always morally correct.

“Back then, they didn’t consider blood quantum. It was about making us stronger, before and after war. It takes more than one to shape a diverse community,” he said.