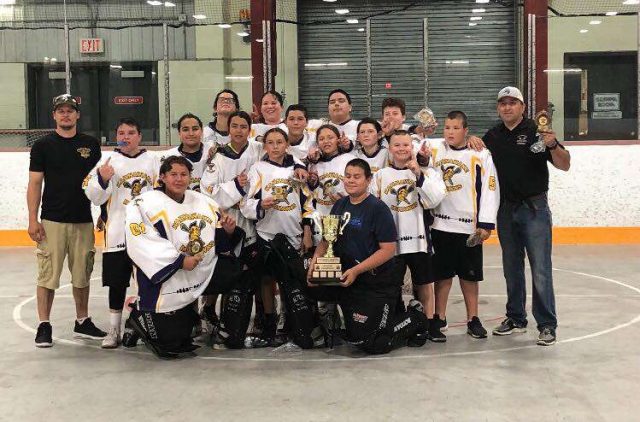 The Mohawk Bantam lacrosse squad showed its quality on the weekend in West Durham, as Kahnawake’s teams work towards the ultimate goal of provincial glory in August. (Courtesy Lacey Paul)

The Kahnawake Minor Lacrosse Association is looking shiny after gold and silver finishes on the weekend at the Don Swindells Memorial Rockmen Classic tournament in West Durham.

“There was a lot of competition out there,” said Tyke and Bantam coach Kirby Joe Diabo. “It’s the heart of Ontario, heart of lacrosse. There are some good teams. It was a good showing from all the teams.”

Diabo’s Tyke team played a solid tournament before losing in the final to the Newmarket Redbirds 8-1, while the Bantam Mohawks brought home gold with an 11-4 win over the host West Durham Rockmen.

“This gang is solid,” said Bantam coach Derek Stacey. “Getting better every time we hit the floor.”

The Tykes blasted out of the gates, winning 11-2 in the opener against the Uxbridge Enforcers before dropping game to 8-6 to the Cornwall Celtics. The Mohawks beat Clarington by the same score before knocking the hometown Rockmen out of the tournament in the semis 8-7.

“They were tough. There were some tough teams,” said Diabo.

The 8-1 loss in the finals was tough for the young laxers, but the coaches know losing can provide as much of a learning experience as winning sometimes.

“They were heartbroken,” said Diabo, whose team won a tournament in Six Nations two weeks prior.

“They kind of got both sides of the cake. They won the first championship, but they lost the championship in this tournament, so they know what it is to win and lose with big competition. That is only going to make them stronger come playoff time… They know what it takes. It’s a good experience for them.”

The Novice team also took the trip to West Durham and lost 6-4 in the semi-finals to Akwesasne, and the Paperweight four and five-year-olds also played.

Novice coach Connor Stacey was impressed at his team’s performance, as the Mohawks lost 16-6 to Akwesasne at the start of the season.

“They are really what a team is about,” said Connor. “Our older players are great teachers, and lead by example.”

Diabo said one reason for the teams’ successes has been the combined commitment to hit practices whenever possible.

“Everybody started earlier this year,” said Diabo. “We started about a month-and-a-half, two months before we could even get into the arena. We started small at the KYC gym. We had everybody going, and with the coaching staff on each team, it’s good to see. Kids are learning more. We’re growing.”

Coaches are trying to get their teams into more tournaments with tough teams to prepare for the ultimate goal. The teams already had a good showing in Six Nations two weeks ago, with the Tyke and Peewee teams winning gold.

“It’s only the beginning,” said Diabo. “It’s good that we got a good showing, but this is not what we’re looking up to. In all the coaches’ minds we’re basically all preparing for provincials. It’s good motivation to get them going to realize that we’ve beaten this competition way out here and once provincials comes, it only gets tougher.”