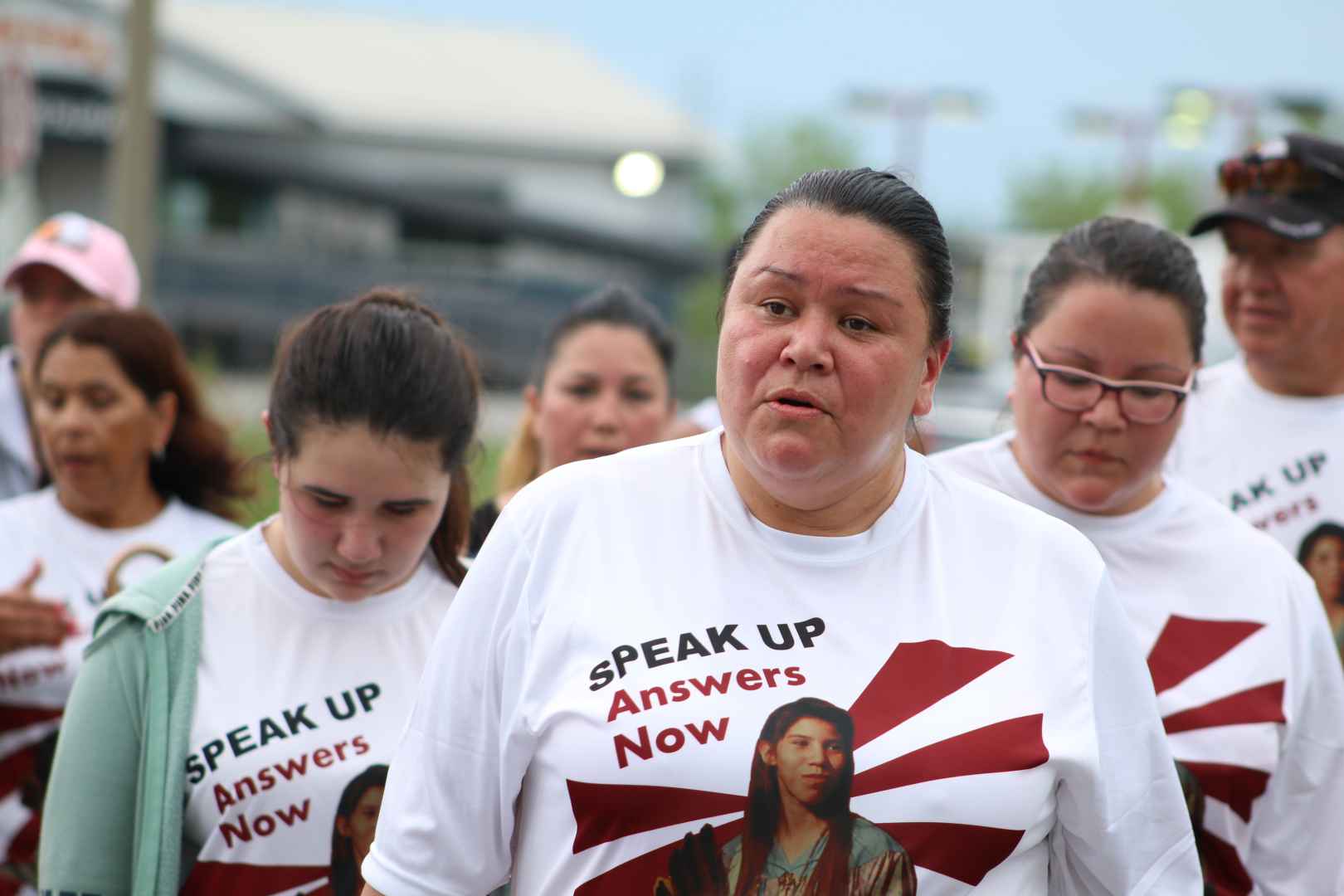 The severe storm warning held off as the group made their annual pilgrimage to a simple memorial – a white cross – that sits along the bike path in Kahnawake.

But in their voices, there was thunder.

“SPEAK UP, ANSWERS NOW. JUSTICE FOR TIFFANY MORRISON,” the group bellowed as they marched their way from the green space under the Mercier Bridge last week, to Morrison’s final resting place – a path they walk every year as part of a vigil held in her honour.

In 2010, a construction worker stumbled upon a human skull and bones, hidden by debris and branches. Dental records confirmed that the remains belonged to Morrison, a 24-year-old Kahnawake woman who vanished without a trace four years earlier.

“When her remains were found – that’s what kicked off the second part of the journey,” explained Melanie Morrison, who has been leading these marches in her sister’s stead.

“When somebody so young, their life is stolen like that; it’s not natural. It’s not right. And she deserves answers for what happened to her,” Morrison said. “She deserves someone to be held accountable.”

Tiffany was last seen in LaSalle, where she allegedly left a bar with another man from Kahnawake and hailed a cab bound for the community. He says he got off first; but Tiffany never made it home.

One of the downsides of Tiffany’s personality, Melanie recounted, was her ability to trust everyone. She was “outgoing, bouncy,” and highly energetic.

But there are gaps in the retelling of events after Tiffany left the bar. The man who took a cab with her told authorities that he got out of the cab before she did, but has since refused to take a polygraph test.

The spot where her remains were found is less than two kilometres from the family home.

And answers to their queries – some closure – may be just as close, Morrison believes. The important thing, however, is keeping her sister’s case fresh in public memory.

Despite a lack of leads in the last few years, Morrison maintains that her sister’s case is not a cold – or closed – one.

The investigation is now formally headed by the Surete du Quebec, but there’s still a dedicated officer with the Kahnawake Peacekeepers who collects leads, tips and statements about Tiffany’s death.

The vigil is meant to push the community to get the ball rolling again. In the age of Internet sleuths and armchair investigators, no piece of information is inconsequential.

“We’re in a crisis stage in Canada with the way our Native girls and women are going missing – our two-spirited individuals – this has to change,” Morrison said. “We have to start caring about one another again.”

Non-profit organizations like Amnesty International have become backers during the Morrison family’s ordeal. They brought the case to national attention when Tiffany’s story was retold as part of the Write for Rights campaign.

Almost 6,000 people across the province of Quebec wrote letters dedicated to the family, explained Gilles Sabourin, a volunteer with Amnesty International.

“We support the local people – the human rights defenders like Melanie – in order for them, for her, to continue the work for justice,” Sabourin said.

In his graveside speech, Father Vincent Esprit echoed the need for a unified, cross-community approach to all cases that concern Missing and Murdered Indigenous Women.

“If there’s one lesson we can learn from Tiffany – it’s family values,” he said. “Coming back to what it has always been in the end: love and compassion from the heart.”

It’s what keeps community members coming out year after year, navigating systemic obstacles and raising their voices in support of Melanie and her family – including Tiffany’s daughter, who turns 16 in August.

And although she acknowledges that it’s difficult to change habits and become involved in someone else’s story – Morrison believes it’s necessary. Rumours or murmuring at parties could yield serious leads, she said.

But like her departed younger sister, Morrison has to be persistent and present during the fight moving forward – coordinating the vigil, making posters, maintaining a Facebook page, and keeping the public engaged with the case.

“Tiffany was in your face when she wanted something – she wouldn’t let you move. Her presence was known,” Morrison said.

“As long as that person who’s responsible is out there, as long as I have breath in me – I’ll be out here fighting for those answers.”

Also, please consider subscribing to our e-edition, which comes out Thursday night, at www.easterndoor.com today, or pick up your copy Friday morning in Kahnawake, Kanesatake, Akwesasne or Chateauguay. We exercise real freedom of the press every single day. Without our reporters fighting for the truth our community would be missing something. E-transfers are accepted at: news@easterndoor.com.