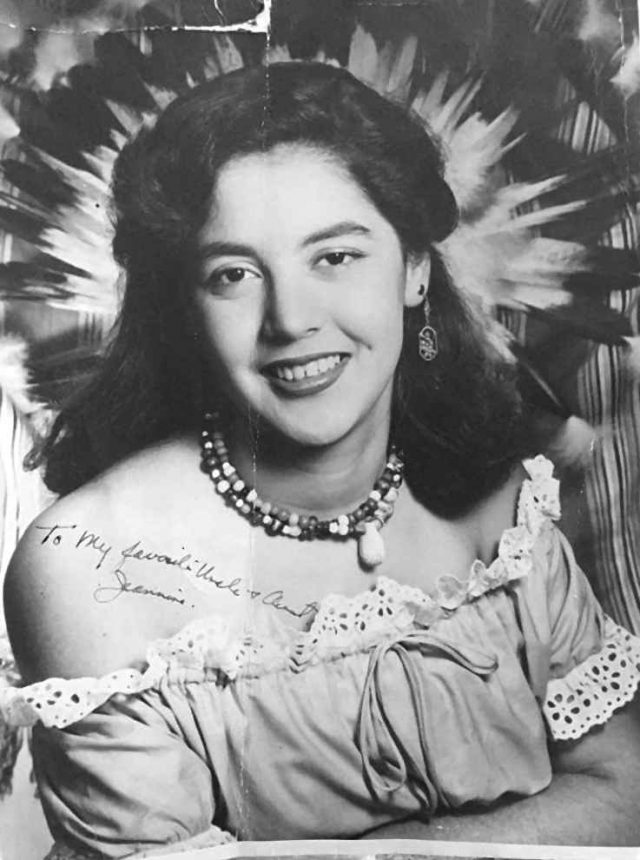 Ladies out there, imagine being young and beautiful and modeling in New York for a popular women’s magazine.

Well for this week’s Blast from the Past, we have a photograph taken from 1949 of Jeannine Jocks. The headshot was used to accompany a story from True Confessions, a Minnesota-based magazine.

What a life? What a dream, no?

Well, actually, we have a confession to make.

Jeannine was not a model nor did she even like this picture of herself.

“This job was just a fluke,” said Jocks’ daughter, Anne Marie Beauvais Jacobs. “She didn’t know what the picture was about until it came out and she was not happy that this was beside a fictional story.”

What the fictional story was about is unknown to her family, but Jacobs believed that it was probably stereotypically about a Native American girl.

“True Confessions had all these love stories, but they were a little trashy,” said Lynn Beauvais, Jocks’ eldest daughter.

“It was maybe just my grandmother’s contacts that found out that they were looking for different models, especially Mohawk ones,” added Beauvais.

Jocks did not even own a copy of the photograph, but her daughters would see it when they visited their grandparents in Brooklyn.

Beauvais remembered there was a copy of the photograph in colour but had since gotten lost.

“The lace around her neck was white and the blouse, it was a pale – not baby blue – but more Dutch blue. It was nice, and her beading was an orangey-red,” said Beauvais.

Their grandmother had set the picture up in a special frame that would light up.

“We would just sit there and cry because we were so homesick for her,” said Jacobs.

Both daughters also remembered their mother as being more than just a pretty face.

“She was a working woman, which was unusual for that time,” said Jacobs.

Jocks was raised in Brooklyn, the youngest of three to Joseph and Marguerite Jocks. According to Beauvais, her mother went to Bishop McDonnell Memorial High School and then went to an all-girls college.

“She was an A student. She was very intelligent and could speak French,” said Beauvais.

“We used to tell her to go on these trivia game shows because she was always getting the answers,” added Jacobs.

Jocks married at 20 years old, had three daughters and two sons and moved back to Kahnawake where she was a “mover and a shaker” of the community.

Jacobs remembered her mother being heavily involved in the education community.

“This, to me, is like a black eye to mention that all what she did was modeling. It wasn’t even her career,” said Jacobs.

“I don’t think she was ever going to make modeling a career out of it,” said Beauvais. “She had other plans.”

Also, please consider subscribing to our e-edition, which comes out Thursday night, at www.easterndoor.com today, or pick up your copy Friday morning in Kahnawake, Kanesatake, Akwesasne or Chateauguay. We exercise real freedom of the press every single day. Without our reporters fighting for the truth our community would be missing something. E-transfers are accepted at: news@easterndoor.com.