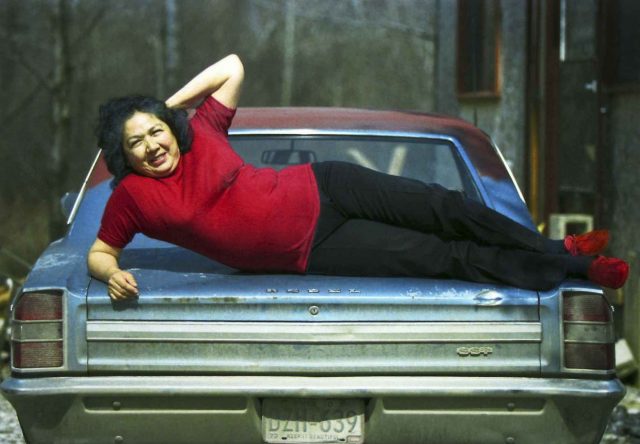 “I took this photograph of my mother, June Chiquita Doxtater, in 1982. She was always willing to participate in any project I was working on,” said Shelley Niro of “The Rebel”. “When I took out my camera, I suggested to my mom that she get on the car, which is an American Motors auto with the word “Rebel” imbedded in the trunk lid. Spontaneously she got on the car and stretched out provocatively.”

Across the country, selected billboards are displaying a fine collection artwork from some of Turtle Island’s finest female and female-identifying Indigenous artists.

“It’s really fantastic,” said Claus. “There’s such a variety and it’s really giving a presence to Indigenous, female artists. You can’t ignore it.”

Fragnito’s “Jingle Dancers Assembled” is a still from her “TimeTraveller” series; the nine-part machinima story centred on Hunter, a Mohawk man in the year 2121.

She was honoured to see her work alongside so many impressive talents.

“The other artists are all really highly-respected Indigenous women artists, and I’m really thrilled to be among them,” she said. “The work is quite good.”

Mentoring Artists for Women’s Art (MAWA), based in Winnipeg, initiated the project, which originally slated to open during the Canada 150 celebration, but was postponed to this year.

Lee-Ann Martin from Tyendinaga was asked to curate the show.

“Because I’ve been curating art for 30 years now, it’s always been a concern of mine that Indigenous women’s art had been underrepresented, ignored, excluded, up until very recently,” said Martin. “I was happy to propose this exhibition of 50 Indigenous women artists.”

The art spans the spectrum of media much like the artists span age, background and nations. The work is either presented on static billboards or digital rotating images, like the one in Kahnawake.

Martin wanted images that would present well on a billboard format, as well as a diverse collection of media, approaches and concepts.

The billboard on Highway 132 near Bully’s Truck Stop includes the artwork. Click on the map here for a complete list of billboards showing the work.

“It was to always have the art stand first and foremost to be as large and in-your-face as possible,” said Martin.

“Resilience rebukes the historical erasure of Indigenous women’s bodies and the exclusion of their art,” the essay reads. “This project is a physicalized reminder of buried histories and diverse contemporary perspectives. Indigenous women artists present their ideas, their visions, themselves.”

Fragnito spoke about her piece in relation to the show.

“Jingle Dancers Assembled is so perfect for it because it’s all Native women standing shoulder-to-shoulder meeting the gaze, looking at the people who are going to be looking at them,” she said.

“What I try to do with all my work is to have a futuristic aspect and a historic aspect, so here’s these futuristic people, but they’re still doing the powwow, they’re still wearing the jingle dresses. I wanted a very sisterly, feminist, Indigenous piece.”

Claus is excited the work will be on billboards, much like the billboard ads across the country asking for help in finding loved ones, who tragically wound up among the missing and murdered Indigenous women and girls in the country – like local Tiffany Morrison, whose vigil was Monday night.

The project honours those lost while claiming a space of pride and strength.

“For a long time there hasn’t been a presence or place specifically for us,” said Claus. “Giving that place is just staking a claim that it’s more than the missing and murdered Indigenous women issues – the sort of things that you see in the news often aren’t focusing on the strengths and resilience and the power of Indigenous women. It’s nice to see that in the art.”

Images and artists’ statements are available on the Resilience Project site. The show runs to August 1.