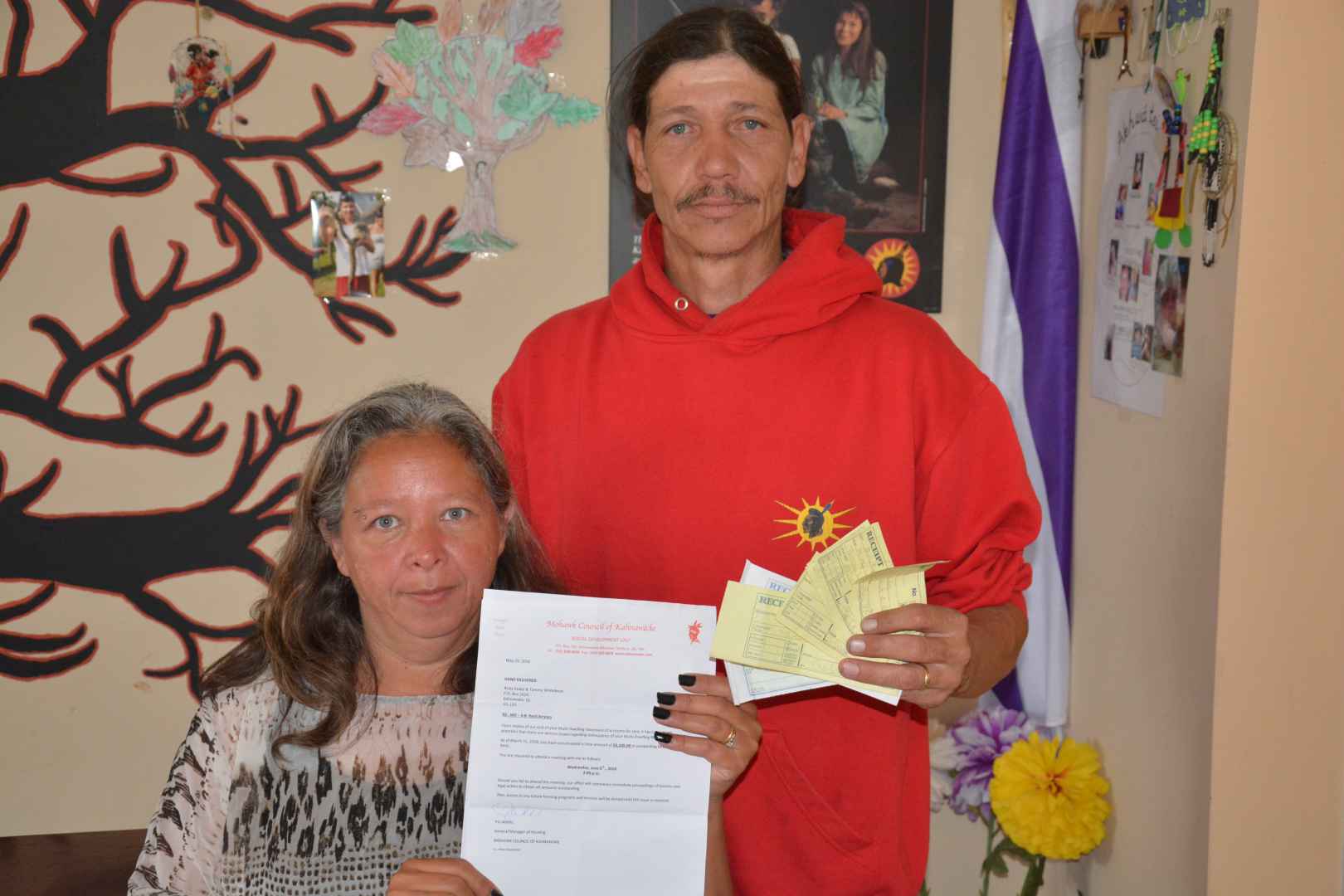 This story was our front page from last week. A new story on this subject will be published tonight via online subscription and tomorrow morning (Friday) in print.

Faced with a letter demanding $5,105 and a threat of eviction, Tammy Whitebean and Rickey Diabo knew they had to get the story out to the community quickly.

The May 29 letter, signed by Iris Jacobs, general manager of housing, was the first the couple heard of any possible money they might owe, because they always pay their rent on time at the Mohawk Council’s multi-dwelling units.

In it, the letter compelled them to meet with Jacobs on June 6 at 2 p.m., and the second to last paragraph reads: “Should you fail to attend this meeting, our office will commence immediate proceedings of eviction and legal action to obtain all amounts outstanding.”

It concludes with “Also, access to any future housing programs and services will be denied until this issue is resolved.”

“That’s intimidation and bullying. We teach our kids not to bully yet look how we’re being bullied by adults, without warning,” said Whitebean. “I’ve been here years and never received anything that we were behind. This is the first time.”

“We went to collect our welfare cheque on the first and it wasn’t there so we went to find out why and they had this big story – you owe us $5,000,” said Diabo.

Whitebean went around the Mohawk Council apartments to see who else got one and she discovered a total of 13 people had them pinned on their doors, or got a notice like she did.

She said a cousin, who isn’t living in the apartments, also got a letter, indicating a much bigger issue relating to mortgages.

Jacobs asked the couple to bring in receipts for 12 missing payments, dating back to 2013. They miraculously found 10.

“I went on the 4th – that Monday – with my receipts,” said Whitebean. “They took photocopies of it and I asked if they checked the receipt book and she said they hadn’t started that investigation yet. I said ‘well don’t you think you should have done that before we received all this?’ I haven’t heard from housing since then,” Whitebean said, last Wednesday (June 13) morning.

No arrangements for payment were mentioned, or any other details, they said, leaving the couple disillusioned and flabbergasted.

“It was like a slap in the face. What are you talking about?” said Diabo.

It hasn’t been easy to get other tenants to come forward, including elders.

“A lot of them don’t want to speak. They’re scared to say something because they’ll get thrown out,” said Whitebean. “This is our home. We have nowhere else to go. Maybe by them seeing us doing it, they’ll come forward.”

The years in question are 2013 and 2014, because after that a paper trail with social assistance means the rent comes directly off their cheques.

Some of the people she visited hid when she knocked at their door because they thought they would be kicked out.

“At this point nobody’s going to be evicted. Not in the short-term,” said Rice, who added he hadn’t actually read the letters when he spoke to TED.

“We’re doing an analysis of their (housing department) policies and processes, as well as a review of all their accounts. That includes any rental and/or loan accounts, just to be thorough, and once we have a report on that we will communicate with the clients that information,” he said.

The process should take about a month, Rice figures, but all housing clients are “encouraged to make their regularly scheduled payments, directly at the MCK cashier,” he said.

Housing portfolio chief Martin Leborgne wasn’t happy he was kept out of the loop.

“I wasn’t aware of the letters that went out and I was disappointed,” he said. “The words they used in the letter, I would never have used any kind of language like that.”

Leborgne talked to tenants and assured them “there are no worries, no one was going to be evicted, nobody’s going to be tossed out.

“At first I was scared when I got the letter because I thought where am I going to go?” said Whitebean. “Thankfully I found most of my receipts, but a lot don’t have them.”