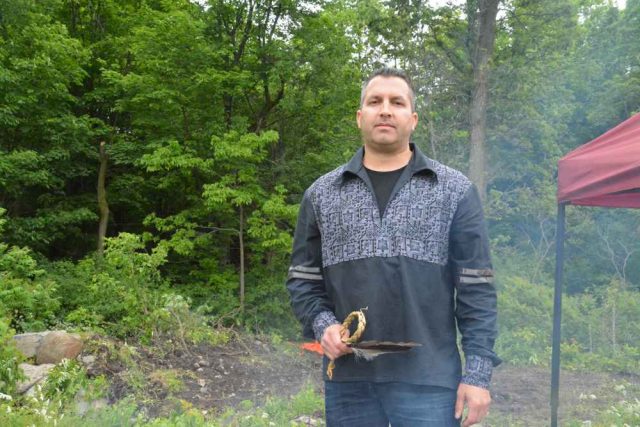 Kanientaa Cross, along with a group of community members and students from Kahnawake Survival School, have been demonstrating on the side of Highway 132 in opposition of the proposed location of a new multi-purpose building west of the school. (Jessica Deer, The Eastern Door)

This story originally appeared in the June 8, 2018 issue of The Eastern Door. An updated story will be published in tomorrow’s publication including the latest events that happened this week.

Work continues to be halted on a geotechnical investigation for a new multi-purpose building, after a group of community members and students from Kahnawake Survival School opposed the proposed location.

“It’s a beautiful idea for the project, the building – I have no problem with it, but it’s the location built in this old grove forest that we have here,” Kanienta’a Cross told The Eastern Door on June 5.

“It’s one of the biggest ones we have left. There’s not many left, and the work that’s being done is exploratory, and possibly will not be the location they want.”

The project has been in the works since June 2016, to create a community building that would house Kanien’kehá:ka Onkwawén:na Raotitióhkwa Language and Cultural Center (KOR), a museum, and an auditorium for the Turtle Island Theatre Company.

Aboriginal Initiatives Fund and Canada Heritage funded the $240,450 feasibility study for the proposed site, which is lot SLS-11, just west of the high school. As a part of the study, the firm Groupe ABS was hired to conduct a geotechnical investigation, land and tree survey.

Work was expected to be completed by June 8, weather permitting, to meet the June 29 deadline for the project’s feasibility study.

“If this study is not completed, and we’re not able to fulfill the feasibility study to meet the deadline, there is a very high possibility that this project will be dead in the water,” said Lisa Phillips, the community programs supervisor at KOR, at a press briefing last week in response to the protest.

Cross was at the site last week and escorted the technicians conducting the work off the site. When they returned to work, Cross, as well as about three-dozen community members and students, were there and as a result work did not continue and hasn’t since.

“There’s plenty of locations in Kahnawake that don’t need to have forests destroyed. Use those locations.”

According to the project committee, only brush was going to be cut in order for machinery to conduct 13 bore holes for the land survey, and any trees marked with florescent tape were part of the survey to inventory species of trees. They also said the Kahnawake Environment Protection Office was consulted on how to carry out the work in the least invasive way.

As for the location, it was one of three presented to the project committee by the Mohawk Council of Kahnawake’s Lands Unit, on the 15 percent of common land left in the community that also had the appropriate size, accessibility and access to services for the proposed 47,000 square foot building,

Phillips said lot SLS-11 met all their needs, including aligning with an existing vision for the cultural center, which is currently facing a situation of being housed in a condemned building.
“We’re presently in our 40th year, the vision 40 years ago was for us to build out there and to be in close proximity to Survival School. Here we are 40 years later with that same vision,” she said.

Multiple attempts were made by KOR and the Mohawk Council to speak with Cross in order for the work to continue, without success.

“We would have to start over all those years of work should we not meet an agreement. That’s a lot of work,” said Phillips.

“We’re not opposed to a lot of work, but it’s very discouraging for everybody who has put in many years of work. All of our dreams and all our hopes are in that building that would offer us the room to be able to do what we need to do.”

Cross said he’ll continue to be on site, and hopes the Mohawk Council of Kahnawake will pass a resolution designating the area as an environmental preserve.

“Ultimately the people are going to have the final say on whether this building goes here or not,” said Cross.

Lynn Jacobs, a consultant with the Kahnawake Environment Protection Office, said the department did express initial concerns about the proposed location, which is home to a hardwood sugar maple forest and several traditional medicines.

“We’re scientists and we need the facts,” she said.

“We haven’t come out with a position on this particular location. We wanted to see all the facts and we wanted to have the feasibility study completed so that we can look at the results of that study.

“The studies they would be doing is in order to gather all the appropriate information so that people can make an informed decision about whether this site was appropriate or not, in terms of environment, in terms of stability of the site, and all the different factors they were looking into.”

Although they’ve been consulted since last summer, they stated they have yet to make an official position of support for the project until the feasibility study is complete and its findings are included in any recommendations.

“While we see tremendous potential in sharing use of this new proposed building, there are some outstanding concerns relating to the preservation of lands that must be addressed,” said Deidre Diome, chairperson of the KCSC.

“Potential access to a theatre, kitchen, art room and social studies class space for KSS students could offer so many benefits to the KSS population, including the re-birth of a campus-style school.

“However, this does not overshadow the KCSC’s commitment to ensuring the concerns of our stakeholders, including students, parents, and teachers, are fully respected in this process.”