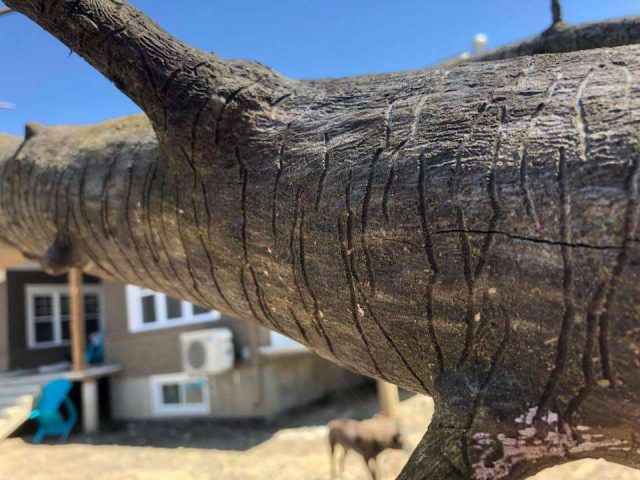 This is the first part in a series on the emerald ash borer and its effects on Kahnawake.

Last weekend, I was planting 40 trees in my backyard (mostly yellow birch and maple), surrounded by red and white ash trees, but it felt like a funeral procession.

I have known about the emerald ash borer (EAB) for many years and The Eastern Door has written about it since 2008, but it is only in the past five years the nasty beetle has really taken hold and is destroying all of our trees with reckless abandon.

We have three types of ash trees in our community; black, white and red, and except for the cork-like bark of the black ash tree, you can hardly tell which is which.

But it goes beyond “just trees.”

Sure, we use mainly hickory for our lacrosse sticks, but ash has been another solid alternative for stick makers and basket weavers.

And it doesn’t only affect us. The emerald ash borer is wreaking havoc in other parts of North America and the ash tree as we know it is on its way out, if predications hold true.

The EAB was first discovered in Ontario in 2002, but is believed to have been in Canada at least a decade before.

Native to Asia, the beetle came to Quebec in 2008 and has decimated ash tree stands to the point of 99 percent destruction in most cases, according to Natural Resources Canada.

Travis Gabriel has been selling lacrosse sticks since 2009 in Kanesatake.

He’s reluctant to use ash because, in his experience with the Asian pest, which has no real natural enemies on this side of the world, it’s just not worth the trouble anymore.

“I recently took down an ash tree in preparation for stick making and I’m not actually able to use it because the wood is brittle,” he said. “No matter how much I steam it, it won’t become pliable.

“As I was splitting it I could see the boring tracks the bug makes in the bark, when it lays its larvae.”

For those who have seen what those tracks look like (see photo above), it resembles a roadmap.

“Your splints will crack on you, break on you, and they certainly won’t split into ribbon nicely,” he said. “Those are the things you start to see now, with the effects of a diseased tree.”

Gabriel lives in Kanesatake down Gabriel Road, where his impressive lot is full of large trees, including a number of ash trees.

But as much as he wants to, he’s abandoning a tree that sustained the Kanien’kehá:ka Nation for thousands of years.

“I think with the ash I’m going to start staying away from it,” he said. “It becomes a lot of work to prepare for making a lacrosse stick. It’s an enormous amount of work for something I’m not even going to be able to use.

“It’s a shame such beautiful wood is going to firewood. There are a lot of good sticks that could be coming out of that wood that aren’t coming out of there now,” he said.

He has three different molds for sticks, but refuses to give them specific brands or names.

In a diseased tree, the leaves on the top of the canopy are smaller, shallower. You might also see shoots sprouting out at the bottom, meaning the emerald ash borer has already signed its obituary.

“When you’re looking up at a tree and can see daylight all the way through, you’re pretty much looking at a diseased tree,” Gabriel said.

If the ash trees are diseased, he said, the only thing they’re good for is firewood.

Gabriel remembers some of the elders talking years ago about losing trees considered precious to the culture.

“They were talking about it in terms of prophecy, a day might come where we might see the dying off of significantly important trees. We’ve been told that this would happen and now we’re seeing it,” he said.

The future or traditional woodcrafts, thanks to the EAB, will have to shift, which means looking into the past to find other materials Kanien’kehá:ka communities once used before Europeans came.

“It’s perplexing,” said Gabriel. “It doesn’t necessarily scare me, but it gets me thinking.

“Let’s hope we can find a way to reinvent ourselves as a culture,” said Gabriel.

Check back next week for part two in this series.