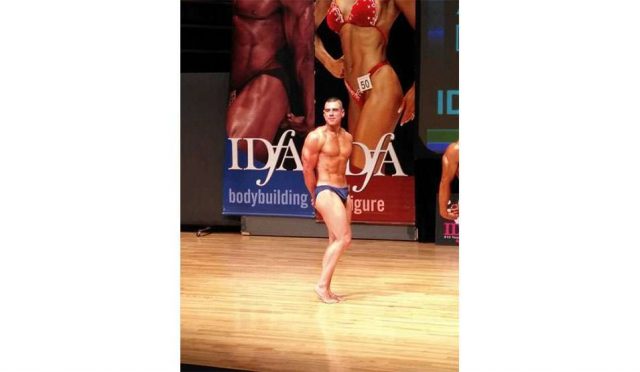 Looking to avenge his last-place finish at his first bodybuilding event last October, Kyle Diabo is going all out.

What does that mean, exactly?

“It requires a lot of discipline to keep to a program of weight lifting and dieting,” he told The Eastern Door. “I train six days a week, sometimes seven. I always look at what is in the food I eat to ensure I am getting the most out of my training – usually high in protein with many vitamin rich foods such as vegetables and some healthy source of carbs.”

“Right now I am cutting to become as lean as possible so I really have to watch what I eat and limit my calories,” said the 5’8 160-pounder, who wants to get down to 155.

“I feel great, a bit nervous, but really excited to do the show.”

And it’s not just bodybuilding for 35-year-old Diabo.

There are also a few other elements that make it pretty interesting.

“The prep requires us to be at five percent body fat. We have to practice an on stage routine as they will call upon us to pose in specific ways as they make comparisons between competitors,” he said.

“We will then be able to create our own routine to display our best poses. We are required to be tanned as well as this helps to improve the definition of the build. We also get graded on the tan as well,” he said.

Size, symmetry, the best poses and the sweetest tan. That’s Diabo’s homework assignment to get on the podium. Oh, and a little sass.

“On-stage presence is critical as the judges are looking for charisma – that is why you always see bodybuilders smiling on stage,” he said.

The IDFA was founded in 2005, and “is committed to promoting drug free (natural) bodybuilding world wide through education, awareness, camaraderie, and community involvement,” according to its mission statement online.

“The IDFA will maintain the integrity of drug free athletics and sport through awareness programs and the promotion and sanctioning of drug free bodybuilding, fitness and figure competitions and shows. The IDFA will have in place strict drug testing guidelines and protocols to ensure a fair playing ground at all IDFA sanctioned events,” it reads.

Last October Diabo faced five amateur competitors in his category, but he feels with added experience and “training really hard,” he has improved quite a bit from eight months ago.

“The charisma for me has to come from the love of the sport,” he said, of the elements outside of the actual weight training that comes with getting into such sculpted shape.

“I want to give everything I have and become better than I was. When I reach the stage I like to feel that I gave it my all and enjoy inspiring others to do the same.”

He gives thanks to his family and friends who have “helped me on this amazing journey,” but he hopes bodybuilding and the sacrifice it comes with will help others as well.

“I would like others to continue reaching for their goals and dreams too. To take it one day at a time as with anything worth fighting for, it requires us to never give up, and you are worth it.”