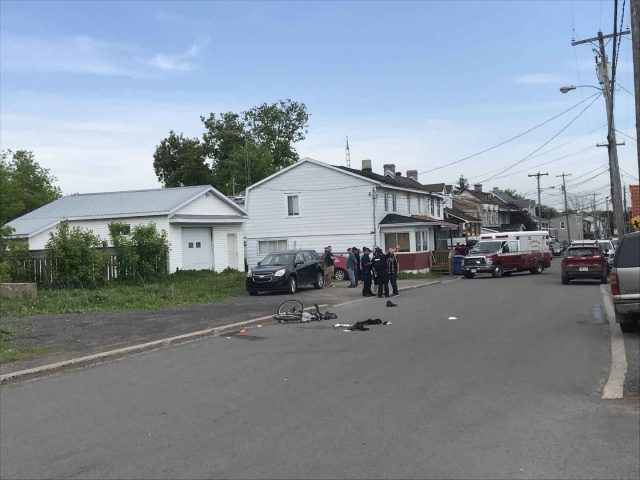 Two young men are facing multiple charges including attempted murder after a community member was shot in broad daylight on the River Road on May 25. (Daniel J. Rowe, The Eastern Door)

Just after 2:30 p.m. on May 25, Laurie Jacobs was working at her café Aromatic Spirit when a customer entered, frightened. She was startled, as much of the River Road residents were, by a gun shot that left a local man wounded, lying under his bike in the middle of the road.

“I came out and said, ‘what the heck is that?’ and I see a guy lying on the road, blood, I see a car there, I see one guy standing out, but I didn’t see him with a gun because the door’s in the way, and he was obstructed, and then “bang!” again,” said Jacobs. “She (the customer) heard, ‘you owe me money! You owe me money!’ That’s what she heard.”

According to the Kahnawake Peacekeepers’ report, calls came into the station at 2:39 p.m., and all officers responded.

“I thought it was a backfire,” said elder Josie Norton, who lives less than a basketball court’s distance from where Skaronhiahatie Gaven Mayo lay seriously injured assisted by some local residents.

“Then all of a sudden you could see commotion over people, and he was on the ground and the bike was there,” said Norton.

Squad cars were dispatched to the scene, and multiple officers sped off with emergency lights engaged to follow the suspects, eventually intercepting the vehicle at the Turtle Bay apartments.

The two men and one woman were taken into custody without incident at 3:22 p.m. and held until Monday when they were charged.

Quaid Diabo, 26, and Josh McComber, 25, face charges of attempted murder, endangering the life of a person, discharging a firearm at a victim, and eight other charges. The crown objected to their release, and they remain in prison.

The local female was released on a promise to appear in court and charges are pending for aggravated assault.

Mayo was rushed to the Montreal General Hospital.

Officers remained at the River Road crime scene in front of McComber’s Convenience Friday interviewing witnesses, family members and friends until around 7 p.m.

Mohawk Council of Kahnawake grand chief Joe Norton was at the scene after the alleged shooting.

“It was surreal, very, very surreal, to see a pool of blood on the side of the road, to see a bike laying there, shoes and a shirt and whatever else, and everybody just standing there with their eyes wide open,” he said. “People talking just to get it out of their system.”

Mayo’s mother Trina Skye told The Eastern Door her son remains in hospital with a long road of recovery ahead.

“He will need multiple surgeries,” said Skye. “Any support is appreciated. Visitors are welcome. He would like to say thank you from the bottom of his heart to Gene Borello and ambulance techs because without them he would not be here.”

Borello used a belt to make a tourniquet to tie around Mayo’s leg above the gunshot wound, and was aided by other community members.

Kateri School, around 350 metres from the crime scene, was put on lockdown with warning, and dismissal was delayed until just after 3:15 p.m.

“I’m pleased to see that the schools went into lockdown,” said Lazare. “Once again, there’s going to be a lot of Monday morning quarterbacks, but based on the information they had, they went into lockdown and they followed through.

The shooting remains under investigation and Zacharie said more information will be forthcoming as it becomes available.

“The information will come out, but I’m not prepared to give a lot of information because the file is very active, and it is a big file,” said Zacharie. “For any police service, it would be a big file. There’s a lot that goes into it and a lot of man hours involved.”

Zacharie added he hopes residents will be discerning when collecting and commenting on information about the crime.

“The big thing we want to stress to people is this rumour mill thing. It does more damage than good,” said Zacharie.

“People think they know. People think they understand. Even if they were there and witnessed a part of it, they don’t know the whole story. They’re extrapolating based on what someone else said. If you’re not there and didn’t see it, and somebody told you, it’s hearsay…

“Facebook is a huge hindrance for us because people will post and write all sorts of things that are not even accurate, and people will take it that it is.”

The Eastern Door asked Zacharie if he could speak to the suggestion that drugs were a part of the crime.

With the investigation on-going, he could not comment directly about drugs’ relation to the shooting, but spoke generally about the drug issue in Kahnawake.

“Everyone who’s a stakeholder in this community can do so much more,” he said. “I don’t think we’re doing enough to educate people on the effects of drugs.

“Just giving them information about drugs, I don’t think there’s enough going on. I think we have to do more. We have to be responsible about it. We have to get ahead of the curve.”

“This sends a clear message that, regardless of what the dispute was about, there is a problem,” he said.

“Having lived in Kahnawake most of my life, I’ve seen things change from in the past when it was almost like a whispered thing about marijuana, having a joint, to today where it goes beyond that. It creates a certain amount of uncertainty. How do we make sure our children are aware of some of the dangers?”

Norton also spoke about guns, and how the entire community needs to look at irresponsible weapons ownership and use.

“We all realize there was 1990 and weapons were used as a means of defence, but this is not defence,” said Norton.

“This is young people who are angry and suddenly break out weapons and start using them. That’s something. Besides drugs and alcohol, there’s weapons… There’s a certain amount of aggression that we have to be well aware of and we have to keep that in check.”

McComber and Diabo are charged with possessing the weapon without a permit, and contrary to regulations, as part of their file.

The reaction to the shooting was a mix of shock, anger, disgust and confusion.

“It was very shocking to see something like that happen in broad daylight right in the middle of the street, in a fairly busy part of the community, not far from the schools, around the corner from the council office,” said Norton.

“There’s been shootings before, and there have been people murdered in the past, but this seems to be hard to describe because you do not expect that.”

Laurie Jacobs sees kids on the street in front of her shop regularly and knows elders often sit on their porches on the River Road in the afternoons.

“I don’t even know what to make out of it,” she said. “It’s come to stupidity. I don’t know what to call it. Broad daylight and there’s schools getting out. There are kids walking here all the time.”

Josie Norton lived in New York City with her late husband, and is shocked that something like that could happen in Kahnawake in the middle of the day.

“Can we trust anyone anymore?” she said. “There’s too many guns. This was the safest place to be. Now, I wonder.”