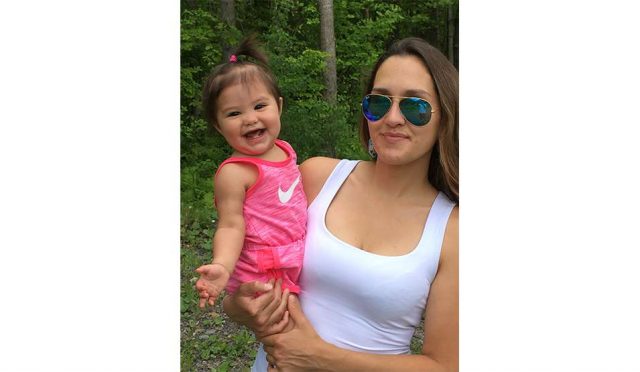 Britlee Karonhiákwas Diabo is excited about raising her two children where the first language is Kanien’kéha, spoken by both herself, her young children and her boyfriend. (Daniel J. Rowe, The Eastern Door)

Pregnant and in her first year of the Kanien’kéha Ratiwennahní:rats Adult Immersion Program, Britlee Karonhiákwas Diabo and her boyfriend Shawn Phillips decided something.

“Shawn and I agreed when I was pregnant that because we can both speak, that we’re going to raise are daughter to be a first-language speaker,” said the 27-year-old about to graduate from the two-year program.

“When we’re home we’re just going to speak Kanien’kéha to her and it’s amazing that she understands when I talk to her.”

Britlee first applied for the program in her early 20s and was not accepted. She then completed a licensed practical nursing course in Ormstown, and worked in an emergency room in Schenectady, New York.

“There was a lot of stuff that I saw there that is completely different from the way we live here,” she said.

“They have a high crime rate, and it was just too much for me. I would come home sometimes, go to my apartment and be super depressed.”

Britlee, the daughter of Francine Morris and Kyle Diabo, then got a job at Ellis Medicine in Schenectady, but knew she wanted to return to Kahnawake.

Having never attended school in Kahnawake or taken a language class, Britlee decided she wanted to return home and enter the program to learn aspects of her culture she had little experience with, having gone to school outside the community.

Britlee did not come into the course with no language knowledge, however, as Phillips completed the immersion course in 2016. He often taught his girlfriend words and phrases at home, which she practiced on her own.

Entering the program, Britlee discovered the benefit of being eager in learning words her boyfriend taught her.

“I was actually really surprised because I had learned so much from Shawn when he was studying that when I came in, I was already beginner-high,” she said. “Because I tried to use whatever Shawn taught me, it helped me out coming into the program.”

Seeing how much her boyfriend’s lessons had helped was a pleasant surprise for Britlee.

“Considering I never went to school in town and never really learned about our culture, it was surprising to come into the program and have people below me that did go to school in town,” she said.

Britlee struggled through morning sickness while pregnant for the first year, but regardless of how many times she had to run to the washroom during a day, would not throw in the towel.

“Every single day, I struggled through,” she said. “I was really determined to finish the program.”

Completing the program is a gift Britlee is very glad she was given.

“We’re lucky that we live in a community where people want to pass the language down. We’re going through this big language revitalization movement and it’s awesome that you have people who are so willing to help you. There’s still a lot I don’t know, but we’ll get there.”