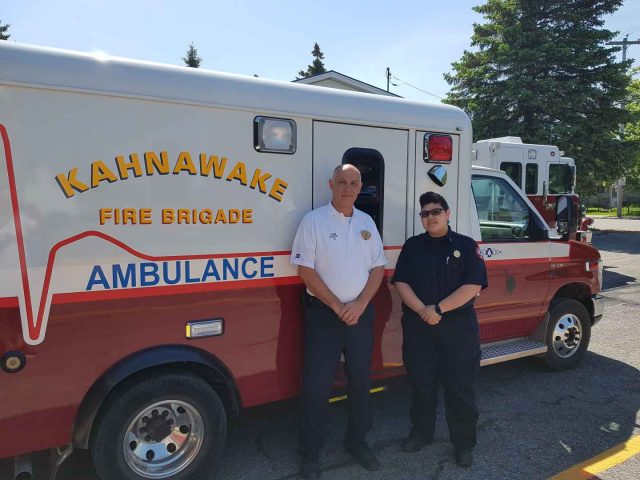 Tired of trying to save lives under increasingly restrictive rules from the Quebec government, the Kahnawake Fire Brigade (KFB) is taking matters into its own hands.

Woefully understaffed, the KFB is launching its own paramedic training course.

“The goal is to develop and teach our own paramedic course in Kahnawake for our own community members,” said Amanda-Lee Phillips, a paramedic instructor and director of quality assurance at the KFB.

“It’s not feasible now to send someone to John Abbott for three years and expect them to come back to Kahnawake afterwards,” Phillips said.

While attending school somewhat nearby may be an advantage. It turns out to be the exact opposite for Kahnawa’kehró:non who want to become paramedics.

“We can’t ask somebody to go to John Abbott for a three-year program and at the end of it only be allowed to write the exam in French,” KFB chief David Scott said.

The KFB is operating with only eight full-time paramedics who run two ambulances 24/7.

There are four volunteers who get paid about $10 an hour when they work. It also means that the full-timers have to act as volunteers a portion of the time.

“It’s not fair on the requirements and on the workload and the training that is required, and all the protocols they have to follow,” Scott said.

In the past, paramedics who worked at the KFB were able to receive their training and certification in one year in New York State. When they returned, that certification was recognized by Quebec. However, that is no longer the case, and that is hampering the way the KFB can find and hire enough paramedics to keep the community safe.

“It will be a sad day if we have to start calling in outside ambulances to take care of our community members,” Scott said.

Which is why the KFB, with the backing of the Mohawk Council of Kahnawake, sent a letter to health minister Gaétan Barrette just last week, stating that the KFB will begin to train and certify its own paramedics, regardless of Quebec’s requirements.

“Council (MCK) says we can train our own and recognize them as paramedics on the territory,” Scott said.

So far the Health Ministry has yet to respond to Kahnawake’s demands.

“We know what we need to do,” Scott said. “We know what we can do and we have the people. We know we will be at the same level or likely higher than the Quebec standards. We can’t wait anymore.”

Phillips is adamant that even though Quebec’s standards overall for paramedics has increased dramatically in the last decade, the KFB can do an even better job.

“We have a lot to do to keep up our skills,” she said. “We don’t get the call volumes that others do so we train to keep up. We train to do as much or exceed what others are doing around Quebec. We train every month. It’s substantially more than ambulances elsewhere.”

Now that the MCK has given the program the green light, they are hoping to force Quebec’s hand in order to allow their paramedics to continue saving lives.

“We are in a crisis situation and our backs are against the wall,” Scott said.

“This is Kahnawake, this is not Quebec, and we are taking care of our own.”