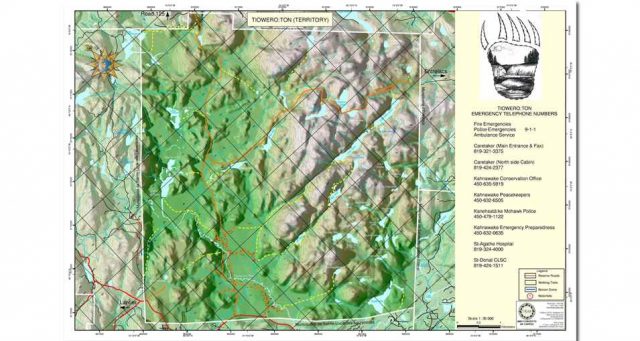 Tioweró:ton is 18,375.8 acres of hunting area for people of Kahnawake and Kanesatake. (Courtesy Mohawk Council of Kahnawake)

The MCK passed a Mohawk Council executive directive last Monday as a means of protecting the environment in Tioweró:ton and keeping the 18,375.8 acres of hunting area pristine.

“Everybody who goes to Tioweró:ton is reliant on groundwater, so that’s always a safety concern. You’d hate to get your well polluted as a result of your neighbour deciding to landfill,” said environment portfolio chief Clinton Phillips.

“People need to be really mindful and cognizant of the fact that their actions today will have a negative effect on the environment tomorrow. That’s a question for everybody who goes to Tioweró:ton needs to ask themselves.”

The ban stems from a community member who brought material from an asphalt recycling company to use as fill at cabin construction sites last fall. The material was tested and confirmed to be contaminated with petroleum hydrocarbons – a broad range of chemicals that comprise oil and products refined from oil, such as gasoline and diesel.

“We had to ensure that further contamination is not coming in. There were truckloads that were dumped in one particular site, so it’s somewhat alarming,” said Phillips.

“We don’t want to repeat or see the same the thing that happened in Kahnawake in terms of contaminated areas.”

Eight council chiefs passed the MCED and the Mohawk Council of Kanesatake is in support of this directive. MCK chief Martin Leborgne abstained from the vote. Leborgne told The Eastern Door he felt he couldn’t because he didn’t want to be a “two-faced person.”

“They should have been explained to by the environment what the contamination is, and that it was a road base material. When you just put the word contamination, you scare a lot of people and I don’t feel that’s right,” said Leborgne.

“Crush asphalt is acceptable for a road base material, and they said Tioweró:ton is pristine and that’s a petroleum-based product. I agree, but everywhere you look in Kahnawake, the road is paved. We even allowed it to be paved right through Tioweró:ton.”

Leborgne was on council when they decided to pave an asphalt road through Tioweró:ton a decade ago. He said he feels that council is responsible for the problem last year when they decided to close the sand pit – a 6.3-acre area that was used as a quarry for dumping and cabin construction.

“They just closed the sandpit where the material comes from, it’s like we created the problem that happened with this crushed asphalt,” said Leborgne.

“They closed the sand pit so people couldn’t get any material for their driveways, so they told them they had to go to a quarry or someplace but got crushed asphalt, which is a recyclable material for a road base purpose.”

Trina Stacey frequents her cabin in Tioweró:ton often. She began working on her driveway following the closure of the sand pit and has since had to pay for similar material. She said not everyone was doing similar best practices.

“I was kind of waiting for it because of all the backlash that has been occurring since the closing down of the sand pit. It was bound to happen that someone was going to try to just get by whatever means,” said Stacey.

“There’s rules and regulations and a booklet of guidelines that applies to being a part of the community at Tioweró:ton. It’s rare that I ever see any of those guidelines adhered to. It’s really lawless. The landfill issue is just one portion of the guidelines that are ignored and unenforceable at this point.”

Stacey is disappointed to read the MCK’s press release about the contaminated landfill.

“I go there to Tioweró:ton to go up to my cabin on the top the hill, where no one ever goes, and go into the bush where there’s only me and the wild animals and nature. I go there for the pristine forest, so it is hurtful that there are other people who are going there and contaminating that natural environment,” she said.

She wasn’t the only resident upset. The issue sparked a lot of controversy and cause for concern across social media from other community members a well.

“I was shocked and frankly very disappointed to hear there is no a system in place to prevent this sort of thing from happening. And if there is why isn’t it working?” said Jeremiah Johnson.

“As Onkwehón:we, it’s one of our first priorities to protect and nurture our Mother Earth. Whatever or whoever is to blame for this incident, it must be cleaned up and a system in place to inspect and approve all landfill entering the territory,” he said.

According to the MCK, at this time only gravel from a recognized quarry is acceptable for driveways and cabin base needs. Phillips said more details will follow on applicable conditions.

“All of these things have to be worked out. The Tioweró:ton committee is working on exactly that. The caretakers have huge tasks to do, so we can’t just burden them with further duties, so we need people to comply,” said Phillips.

Tioweró:ton’s annual spring meeting will take place on June 2, and the MCK announced that one of the agenda items includes the ban on land filling, as well as the sand pit restoration plan.

The meeting takes place at 10 a.m. at the main entrance.