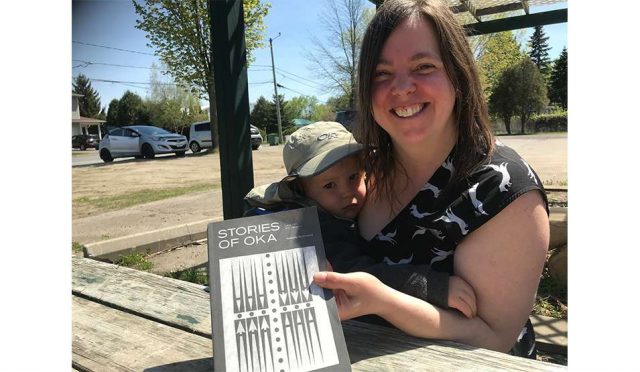 Isabelle St-Amand, with her two-year-old son Leon, returned to the KOR Friday to talk about the book she literally spent years researching the Oka Crisis, at the cultural centre’s library and elsewhere. (Daniel J. Rowe, The Eastern Door)

A new translation is out of an incredible piece of research exploring the seminal event in the region’s modern history, known commonly as the Oka Crisis.

Many books, films, documentaries and other artistic, journalistic and academic work have been produced on local history of the summer of 1990, and Isabelle St-Amand’s Stories of Oka: Land, Film, and Literature (University of Manitoba Press, $27.95) explores how the various works interact with one another and tell the summer’s story that year.

The author sat down with The Eastern Door and spoke about the process of exploring the event that a) she had only a basic knowledge of, and b) she was approaching from outside Kanesatake and Kahnawake.

“I had no clue of what I was going to get into in the sense that I had no understanding of that event, I was a teenager when it happened and lived in Shawinigan, but I remember it was really striking and I did not understand,” said St-Amand.

The author came upon the idea after researching the 2001 Summit of the Americas focusing on the protest against the FTAA (Free Trade Area of the Americas), which included many Indigenous protesters.

“I kind of realized, I live right here, and it’s crazy. I don’t know anything about any history or any people,” she said. “I thought I could do something with them and if I do my PhD it could be related.”

The French version of the book was released in 2015 after St-Amand studied thoroughly for six years.

She approached the crisis from a literary and artistic perspective; analyzing the various work done on the event such as Alanis Obamsawin’s Kanehsatake: 270 Years of Resistance, Geoffrey York and Loreen Pindera’s People of the Pines, and others.

She spent years inviting guest speakers to UQAM (where she completed her PhD) to speak about their work, which helped her connect with those who had already written or produced work on the crisis.

Essentially, she asks in the book what happened, and follows with an examination of how it was filmed or written about.

“The process was first to realize the depth of the event, and the whole colonialism that I was not aware of, and how it impacted my research,” said St-Amand.

The book is not meant to solve the ultimate questions of the crisis, but rather to continue the conversation about the event and how it affected those involved.

“I knew I couldn’t say, ‘this is what happened for everyone,’” she said. “The most important part I found was to find a methodology to allow for each different person to speak on their own.”

The book is a valuable academic work that will be useful for teachers in a variety of disciplines. Particularly helpful are the moments addressing conflicting accounts and bias in reporting the event.

“I asked Martin if he wanted to provide one of his artworks for the cover, and he proposed that one,” said St-Amand. “It’s beautiful and just a perfect cover I find.”

“I worked with Isabelle on the Reimagining Indigenous Cinema of the Americas over several years, and grew to trust her as a scholar and an arts activist with a keen understanding of our artwork and motivations,” said Loft. “I was pleased and honoured to offer this serigraph as an illustration for her book cover.”

The author spoke about writing from outside the event and communities, knowing she could not speak for those who took part

“I wanted to speak about the event and not just the Mohawks or the Quebecois, and look at this event and how people got engaged in it,” she said. “It helped to focus the exploration that is not studying people. It’s the event, and the event concerns settlers as much as it does Indigenous people, because, if we were not here, this would not happen.”

Her hope is that the conversation will continue, and that those who read it will view the documentaries, read the literature and know more about the events in 1990.

“Maybe its main contribution and what I hope it can achieve is to offer ways to bring back the event now that are accessible to a bunch of different people, and for non-Indigenous audiences, especially, can understand the deeper issues. I hope that they can access different voices that spoke about this,” she said.