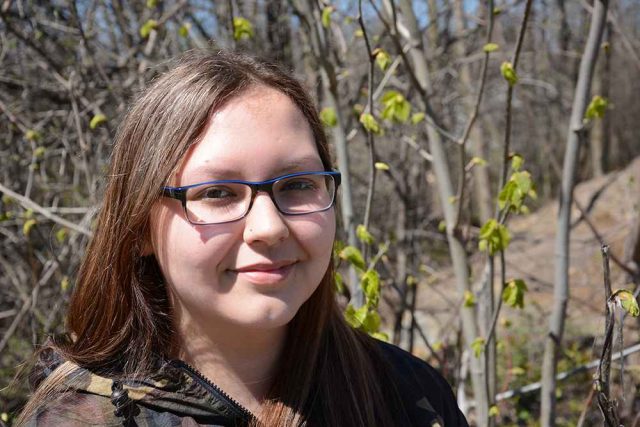 Kwanatawí Cook’s struggles with anxiety and stress led her down a dangerous path fuelled by Xanax that she pulled herself out of, but not before a painful detox. (Daniel J. Rowe, The Eastern Door)

Cook started popping Xanax pills when she was 16 after a friend told her the effect was amazing, and got to the point where every day was a quest for the benzodiazepine anti-anxiety pill meant for single-dose use for panic attacks.

“It got to the point where my addiction got so bad that I didn’t want to do anything but find ways to get high,” said Cook.

Cook, who was expelled from KSS for smoking weed, saw The Eastern Door front-page story April 13 (vol. 27 no. 15), and came forward to speak about her addiction and the troubling trend of recreational Xanax use among the community’s youth.

Cook admitted she suffered from anxiety as a teenager, as many do, and was coaxed to try Xanax as a way to relax.

“My friends were, ‘hey, you want to try this? It’s so awesome.’ Everybody around me was telling me it’s so amazing,” she said. “It would just be like, ‘oh I have a test tomorrow. I’m going to take half just to calm down for now.’”

Xanax soon became a crutch to help her through nights at parties and bonfires, and days at school.

Xanax, Cook said, is often chosen over marijuana as a way to deal with stress and anxiety.

“You think at the time that it’s better,” said Cook. “Most people, especially when they’re smoking weed for the first time, they get paranoid. This, it eliminated every insecurity, anxiety that you have, and, at the time, you just think it’s better because you think, ‘I’m so free, and I can just do anything I want,’ which is also the dangerous part of it because you think you’re invisible. You don’t think there is any consequence to your actions.”

Cook said her reliance on the drug came fast.

“It became bad really soon,” she said. “Maybe a month-and-a-half after trying it, I wanted it more and more and more.”

She, like many addicts before her, admitted she stole money from her parents (Gary Cook and Caroline Charles), and others to feed her habit.

KSCS prevention worker Jessica Oesterreich spoke to The Eastern Door for the April story, and said low-dose Xanax-use as prescribed is not addictive. High doses regularly, however, mean a very good chance of addiction.

“When it’s misused like that, it’s very addictive, and very hard to stop using,” said Oesterreich. “The withdrawal symptoms are very hard to manage.”

Xanax, Cook said, is everywhere among youth in the region.

Last week’s Police Blotter included the arrest of a local male with 89 suspected Xanax pills that were seized, and Cook said some of her friends were taking as many as 15 a day.

A student The Eastern Door spoke to for the original story said she saw Xanax being used at school in Chateauguay every day.

At 18, Cook had enough. She locked herself in her room for two weeks and went cold turkey; not something recommended by KSCS or doctors, it should be noted.

“I was really determined to do this because I had successfully ruined my life at that point,” said Cook. “Everything was going bad, and I knew I had to turn it around.”

The toll on her body was intense.

“I was sick. I couldn’t eat. I was vomiting. My whole body was against me, that’s what it felt like,” she said.

“It was awful. At the time, you think it’s the greatest thing that happened to you, it wipes away all my problems, but really, what you’re not seeing, is that it’s creating a dozen other problems.”

Cook admitted she fell off the wagon once early in her sobriety, but has remained clean since.

After days of struggling to get clean, Cook eventually told her mom what was going on, and she immediately told her daughter to contact community services.

“It was very difficult,” said Cook.

Cook had already developed a relationship with addiction response services worker Nancy Worth at KSCS.

“From that point on, I wouldn’t say it was easy for me, they (the steps) were all there,” said Cook. “It’s all about the situation.”

Cook is now completing her high school education at the First Nations Regional Adult Education Centre, and has plans to attend CEGEP.

She knows what the addiction cost her reputation, which was not a pleasant realization.

“It was painful for me because I had developed a reputation that was just like, ‘don’t hang out with her. She’s scum.’ I was a bad person,” she said. “Reflecting on that, and realizing what I had become and how I was so angry and agitated all the time, it was painful. That’s not what I wanted to be.”

Cook is frustrated at the lack of education in Kahnawake on the dangers of recreational Xanax use, as well as the eagerness among some to stick to punishment over treatment for users.

“This community, a lot of the times when drug problems are the issue, the solution is, punish them. Kick them out of town. Send them away. Lock them up forever,” she said.

“There certainly are better ways to go about this, and, with Xanax, it’s a younger kind of crowd. I have some cousins that are very young that I know are experimenting with it.

Cook felt she needed to speak about it publicly as it’s an issue that receives surprisingly little attention.

“This is an issue that’s been going on for years,” said Cook. “When it started for me it was 2015, and nobody’s been talking about it really.”

Cook said the art therapy program at her school helps with her anxiety, and she hopes more schools will set up outlets and options for young people to talk about the root causes that prompt them to search out highly addictive and dangerous drugs like Xanax.

“Anxiety is such a common thing and a lot of the kids, myself included – I thought I was alone in it,” she said.

“I had so many feelings. I wasn’t sure where I was going. There was pressure for me to be good in school when I wasn’t confident in myself. I just wasn’t being approached in the right way.”