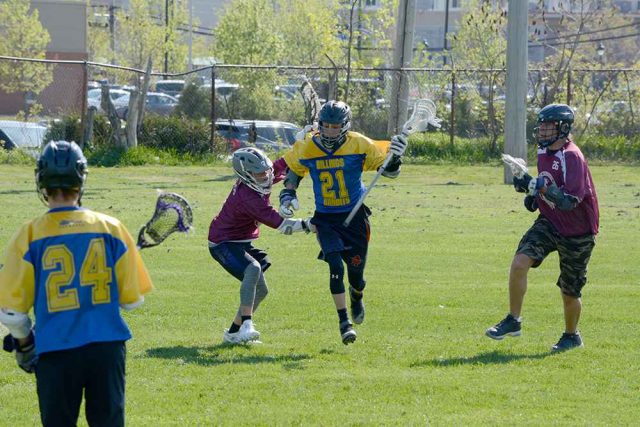 Billings’ Tekaronhiawá:kon Cross-Pranteau was near unstoppable, switching from defence to offence Wednesday, scoring five goals and tearing up the middle of the pitch. (Daniel J. Rowe, The Eastern Door)

The GMAA field lacrosse playoff bracket is set and games begin today with surprise of the season Beaconsfield (4-0) top of the standings followed by six-time champion Billings (3-1), which beat KSS Wednesday at home 14-5.

Kuper Academy ended the season at 2-2 after beating Westwood High School (0-4) 11-7 Thursday, and pulled ahead of Survival (1-3) for the third spot.

In the season’s most anticipated game Wednesday, Survival and Billings both fielded shorthanded teams with major contributors Reece Glover-Kirby and Payne McGowan absent for Billings among others, and Tehatokénhtha “Boo” McComber not in the game for KSS in addition to the Muskies’ two first choices as goalie.

Albany, however, could not stop the dynamic offensive Billings duo of Tekaronhiawá:kon “Wakon” Cross-Pranteau and Koleton Marquis.

Cross-Pranteau was borderline unstoppable for Billings, scoring a hat trick in the first half alongside the always deadly Marquis, who scored two and had two assists in the half.

With the halftime score 6-2, Survival was still in the game heading into the second half, but the third period put the game more or less to bed when Billings outscored their neighbours to the east 5-2 to push the lead to 11-4.

Grade 10 Survival attacker Hayden Nicholas was a standout for the burgundy, scoring three of the four goals and setting up Bossy Rice for the fourth.

Cross-Pranteau and Marquis combined for three goals in the fourth quarter, pushing the game out of reach for Survival.

Nicholas spoke about his team’s holes, and knows the boys in burgundy will need to play stellar in the playoffs.

“We’re missing a bit of everything: offence, defence,” he said. “We all need to work together as a team instead of everyone going at it on their own.”

Survival’s team is replete with young talent and he is not prepared to throw in the towel yet.

“Probably in the future,” said Nicholas. “They’re probably going to get better, and maybe by next year we’ll have the championship.”

Cross-Pranteau, who ended the game with five goals, was short on words about his Billings side.

Billings will face Kuper Thursday in the semi-finals, and the team, fully assembled, should contend for its seventh straight banner.

However, Cross-Pranteau knows there’s work to do to avoid  a repeat of the humiliating 9-8 upset to Beaconsfield May 10.

“We already have a good defence, we just got to play more good offence and not lose the ball as much,” said Cross-Pranteau.

Today’s game at 4 p.m. is at Survival where the Muskies take on Westwood. Semi-final games are Thursday at the same time at Beaconsfield (against the winner of today’s game), and Billings.