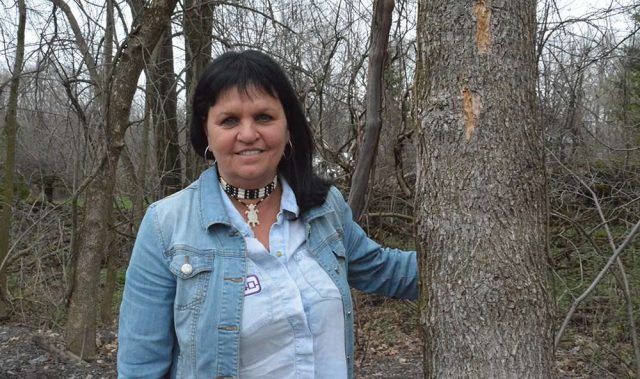 Former Mikinak leader Lise Brisebois received First Nation status under the Indian Act last year, and people in Kahnawake and Kanesatake are not happy about it. (Jessica Deer, The Eastern Door)

She’s been called the queen of the Mikinaks, a wannabe, and a fraud, but recent amendments to the Indian Act’s registration process got Lise Brisebois something she’s been fighting for, for three decades: status.

The 59-year-old received her status under the Indian Act on November 8, 2017, and to the dismay of many Kanien’kehá:ka, is registered to Kanesatake’s band list.

The story caught fire on social media after Brisebois said someone from a gas station in Kahnawake took a photo of her band card and put it on Facebook.

Brisebois and her husband, Gilles Gagne, sat down with The Eastern Door last Friday. They showed pages of screen shots of messages that were sent to her or posted about her.

“Now I’m receiving death threats. They tell me that I’m a false Indian, that I’m a wannabe,” said Brisebois.

Brisebois went to the Peacekeepers this week to file an official complaint about the threats made against her.

“I’m hurt now. I don’t want to feel anger towards them. What I feel, with all the stupidity that I’m told, the meanness, it’s you (the ones who posted about her) are not Indian. You’re white because whites just throw shit at others and Natives are supposed to help each other, not bring us down or spit on us. They tell me I’m not a real Native but I have always been Native.”

Brisebois ruffled feathers across Turtle Island in 2016 after she caused headlines across Canada as “chief” of the Mikinak de Monteregie, a self-identified Indigenous community she started in Beauharnois under the Confederation of Aboriginal Peoples of Canada (CAP) and its leader Guillaume Carle, attempting to bring economic and governmental autonomy to its members.

She told The Eastern Door that she stepped down as the group’s chief and cut ties with Carle last year following dysfunction and disagreements about using their group to try to get vehicles delivered on reserve tax-free, and using DNA testing to determine Indigenous heritage.

“I live my life as a Native person,” said Brisebois. “I don’t care about the tax benefits, I just wanted to be recognized as what I am and always knew I was – an Indian.”

Although she’s no longer involved with the Mikinaks, the damage has been done in the eyes of many.

“I’m a little bit shocked and kind of disgusted on Indian Affairs doing this after all the promises they made to us to give us more of an authority over our own state of affairs.”

Simon said he was contacted via email by Brisebois, inquiring how she can acquire lands and learn her culture. Both Brisebois and Gagne told The Eastern Door they intend to move there from Beauharnois upon retirement.

“Not going to happen,” said Simon.

Simon said since the news has floated across social media, there’s been a lot of “pointing of fingers” at the band council for green-lighting her on their registry.

“That’s the first knee-jerk reaction. It has nothing to do with the band council accepting this person, as a matter of fact, what we’re going to do, we’re formulating right now our objection or our contestation against this member and any member that falls under the Descheneaux (court decision) that might possibly affect our membership in a negative way,” said Simon.

“It’s an ancestral right since time immemorial that we decide who comes into our village, who stays, and who goes. It’s not up to the federal government to make that distinction, it’s up to us.”

So, how does it happen that a former leader of a self-identified Indigenous group actually acquire status under the Indian Act, and end up registered in Kanesatake?

Status is something Brisebois said she’s been fighting for over three decades, based on her maternal family’s lineage.

“I’m not just legitimate now, I’m Indian from birth. When I came out of my mother’s belly, I was Indian,” she said about her status.

According to documents obtained by Indigenous Affairs’ registrar, Brisebois’ maternal grandfather was “deemed to be” a Mohawk of Kanesatake, while his parents and grandparents were Algonquin.

Eric Pouliot, who’s been a researcher in the field of public archives for 15 years and has written the Our History section in The Eastern Door in the past, verified Brisebois’ genealogy with parish registers. He believes the registration as a Mohawk was a mistake on the part of a former Indian Agent.

Brisebois’ life, she said, was always lived as a Native person, inspite of her fighting for 31 years for status from Ottawa.

She hunts, she used as an example, and gives thanks to Creator and the animal afterwards – something non-Natives don’t practice.

“It was an inter-nation mission back then,” said Pouliot about the Two Mountains mission that was created by the Sulpicians in 1721.

“When the mission was created, there was 70 percent Algonquin, but the Algonquin stayed there from three to four months a year, otherwise they were hunting all year round,” said Pouliot.

“When they created the reserve in 1853-56, all those from Kanesatake went north but a few families, mainly elders that got used to farming and stayed there for a little while more, but they never got registered as Mohawks.”

The issue usually was those in charge of recording people in the censuses sometimes made errors.

For example the Cimon name was said to be linked to the Simon name (which is Mohawk), but they are different altogether.

Bill S-3: An Act to amend the Indian Act, received royal assent in December, in response to the decision in Descheneaux v. Canada that was rendered by the Quebec Superior Court of Quebec in 2015 to address sex-based inequalities in registration by widening the scope of who is eligible for Indian Act status.

While Brisebois said she was not sure if S-3 what got her family’s status approved, the situation is a real-life example of what could happen as a result of the amendments according to Mohawk Council of Kahnawake’s membership portfolio chief.

“They’re all people who weren’t eligible for status based on the previous criteria, but now that S-3 has opened up that door so much wider,” said Kahsennenhawe Sky-Deer.

“We could have 29,000-36,000 Lise Brisebois connected to Kahnawake, and with that connection, based on the way the Indian Act works, entitlement to be beneficiaries of any land claim settlement, they’d be able to have a voice in decision-making, to own land.”

According to Sky-Deer seven individuals have already been to register to Kahnawake under Bill S-3. The Winnipeg Free Press recently reported that only 351 people had registered as of April 22 and as May 2, Ottawa had received 2,983 registration requests as a result of Bill S-3.

“That list is just going to grow and grow, and then they’re going to outnumber the actual members of this community up to five times. It is scary, I don’t care what anybody says, it’s scary, and we need to do something about it,” said Sky-Deer.