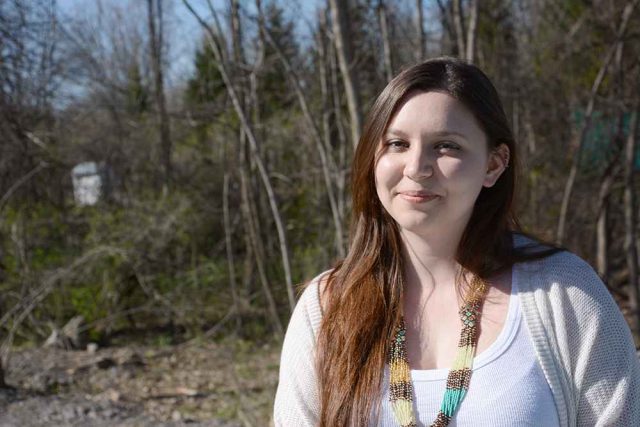 Cassidy Wahianóron Meloche found a way use all of the skills she built as an academic to balance the stress of learning her language and enjoying it. (Daniel J. Rowe, The Eastern Door)

Completing an undergraduate degree often comes with the ultimate question: what next?

For 24-year-old Cassidy Wahianóron Meloche the answer was to study in a different setting with a different goal: learning her language and culture.

“I was in my last semester and I still really had no idea what I wanted to do afterwards, and then they were taking applications and I figured, go for it,” said Meloche.

She completed a bachelor’s of arts in human relations and then entered the Kanien’kéha Ratiwennahní:rats Adult Immersion Program at age 23.

Meloche attended Kateri School until fourth grade, and left the community to complete secondary school. With CEGEP and university next, Meloche was far removed from any Kanien’kéha lessons before entering the immersion setting.

“At 23 years old, I pretty much knew Shé:kon, Okwá:ri, some colours and that was basically it,” said Meloche.

She admitted entering a class with many students who had studied Kanien’kéha since childhood, and most who were younger took some adjusting to.

“They had a basis to fall back on, so it was a little bit intimidating, but I think I caught up pretty quick,” said Meloche, who admitted she is shy, and didn’t know any of her classmates that well before classes began.

“It was difficult for me to come out of my shell a little bit and form friendships, especially when I had to speak in a language that I didn’t know, so I didn’t know how to be outgoing in a different language.”

Her passion for knowledge helped motivate, but learning Kanien’kéha was very different, and, like many before her, she struggled at times.

“I’ve been a student for a very long time so I love learning, but there was something about the first couple of months of the program where it was really, really hard,” she said. “I was going home every day with headaches, and feeling like I can’t do it, but you just got to push through.

“Once I started seeing on my tests that I was improving, it kind of gave me that second push that I needed.”

Cassidy and her younger sister Kennedy, 19, are the daughters of Landon Meloche and Melanie Mayo.

“I didn’t feel like I belonged there,” said Cassidy. “I didn’t think I’d get accepted because other people knew so much more than me, but my mom really pushed me.”

Cassidy shared advice she was given to help motivate her get through her inhibitions, and succeed.

“I got some really helpful advice from my friend’s father, and some people in my own family,” she said. “They said, ‘don’t be shy. Being shy doesn’t benefit you. You’re not going to grow if you’re shy.’ I really took that to heart and I started talking to people, and, during breaks, hanging out with people and trying to talk to them.”

Cassidy and Melanie now have the opportunity to build on their collective language skill to reintroduce the language to the family. Aside from her late great-grandparents, Cassidy did not have any elders in her family she could speak with in Kanien’kéha.

The mother-and-daughter text each other in Kanien’kéha, and continue to encourage one another in their respective language skills.

Cassidy has seen the unique pressure that comes from both sides of those wanting the youth in the community to succeed.

“There’s one side that says our youth have to pursue a post-secondary education, go to university, get degrees in business because we need economic development and money to sustain ourselves; but then there’s the other part of it that you’ve got to re-learn the language, re-learn the culture, and it’s for the children,” she said.

Balancing the pressure is not easy, but Cassidy has found ways to remain calm and continue her pursuits despite outside pressures.

“Tying to be a good person, focussing on myself and learning about myself,” she said. “When I started here, and I actually really found the signs of all the stress, I really needed to learn about myself, and what I need to do and calm myself down.”

Learning Kanien’kéha is something Cassidy said all community members should attempt, regardless of background, age or experience.

“It doesn’t matter what age you’re at. You’re never too old to learn our language and culture,” she said.

“There’s a little bit of hurry right now just because our first-language speakers are in their 80s and just in this past year a lot of them have passed, so there is a kind of a push. If you want to do it, try to do it as soon as possible.”