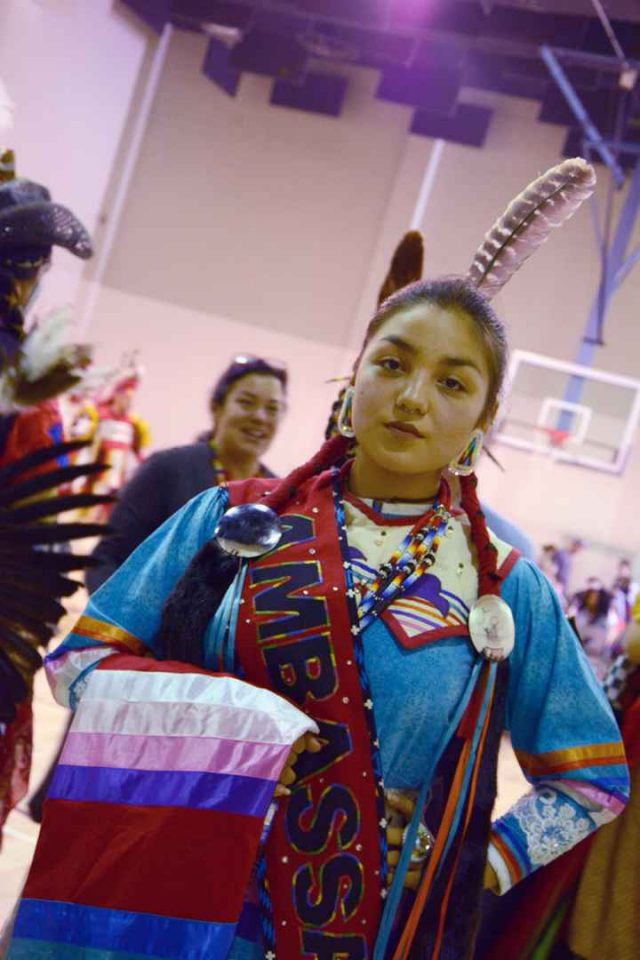 Kahwennaha:wi Raye was not ready to let Montreal go a spring without a powwow, and, along with Elizabeth Irqumia and Steve Dube, organized an enthusiastically-attended celebration at her high school, Beurling Academy. (Daniel J. Rowe, The Eastern Door)

When Montreal Pow Wow organizers announced there would be no event this year, a 17-year-old student from Beurling Academy stepped up.

“I was upset, but I was more than happy to take it over,” said Inuk/Kanien’kehá:ka graduating student Kahwennaha:wi Raye. “I had to, I really had to.”

Raye, along with Inuk Elizabeth Irqumia and fellow grade 10 student Steve Dube, organized the Gathering Spirits Pow-Wow 2018, Reconciliation for Our Youth that welcomed dancers, vendors and visitors to the Verdun school Saturday and Sunday.

“I just felt like there’s nothing going on in the city,” said Raye. “I’m one of the few Native people in this school and the school board was mandated to do some kind of cultural activity, so I came up with the idea and ran it by the school staff, and they were like, ‘totally. We should do it.’”

Beurling Principal Alix Adrien was personally and professionally excited to host and play a part in the ceremonies.

“This is my first powwow,” Adrien told The Eastern Door. “I’ve always wanted to go to one, and to have the opportunity for me to open my doors, and to have this is such a wonderful moment. Not only to have the powwow come in, but to participate in the grand opening ceremony is a wonderful experience. I’m very happy.”

Adrien, born in Haiti, has been at Beurling for 10 years, and hopes other schools in the Verdun area embrace and promote its Indigenous population.

“Definitely,” he said. “I’m hoping that this powwow at Beurling Academy can become an annual thing, but more importantly, I hope it can become a model for other schools.”

In addition, Adrien hopes the powwow will inspire more discussion in the classrooms, and he will work to ensure Onkwehón:we stories become commonplace in history and other classes.

“I think it’s important for the Indigenous people to be a little more exposed in terms of being included in the history curriculum,” said Adrien. “If it doesn’t come from the top maybe it can start from the grassroots by exposing the students to the Indigenous cultures. I’m looking forward to making sure that they incorporate this next year.”

Raye, whose mother Qaunnaq Kenaajuak is from Salluit, and father, Kevin Raye, is from Kahnawake, was blown away by the numbers that turned up and danced in her school’s gym.

No one was happier to see the powwow happen than Al Harrington, organizer of the Montreal Pow Wow from 2014-2017.

“I was kind of blown away when she called me the next day and asked, ‘what happened to the Montreal Pow Wow?” and I told her that the funding was cut,” said Harrington. “When she stepped up, I said ‘absolutely.’ I felt very honoured that she wanted to do it… I love it.”

Harrington and Adrien were doubly excited that the idea, organization and implementation came from someone like Raye.

“To be in a position to empower her and bring this to Beurling is a great opportunity. We’ve only seen the beginning of this young lady.”

A powwow on Tiohtià:ke (Montreal) is something Raye knows means a lot to those who live in the city.

“It means that all the urban Aboriginal people come together as one, because usually in the reservations, like Akwesasne or Kahnawake, everybody knows everybody and that’s not the case here in Montreal,” said Raye. “We’re all disconnected from our cultures, and we’re all looking for an answer. This might be it.”