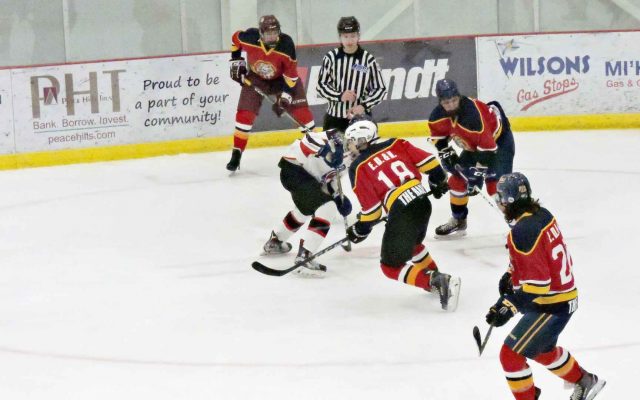 Neither the boys nor the girls EDN teams were able to make it to the playoffs of this year’s NAHC, with early setbacks hurting both squads. (Courtesy Martin Morris)

For the second year in a row, neither Eastern Door and the North (EDN) hockey team will come home with a medal from the National Aboriginal Hockey Championships (NAHC) held this week in the Mi’kmaq Membertou community in Nova Scotia.

The girls’ team needed a win Wednesday night against the stacked and flying Saskatchewan team that was perfect at the tournament.

Kahnawa’kehró:non Kyla Morris and the rest of the EDN squad just did not have enough against Saskatchewan, who shut out the local girls 8-0.

The loss moved EDN to 1-2-1 with the team’s lone win against New Brunswick Tuesday.

The EDN boys played their final group game yesterday after printing against Manitoba, and will play a game today for placement in next year’s tournament.

The games came after the boys weathered a turbulent beginning to the tournament, and played hard but failed to win a game in three tries to eliminate them from playoff contention.

Mathaus Mehlhorn had the lone goal for the EDN Wednesday in a loss to Ontario North, and knows the score lines could have been a lot better.

“We’re getting very unlucky and just can’t bury the puck,” he said.

The team also included local puck stars Reece Glover-Kirby, Kobe McComber, Ronwahrharaties “Bug” McGregor-Norton, and Karonhiawakon Diabo, and had a much shorter bench than their opponents after four players failed to show for the tournament, and the original coach left at the beginning of the tournament.

“Seeing the boys have a meeting last night (Tuesday), trying to get better, I was impressed,” said Martin Morris, who attended the tournament.

“They had to scramble and considering the scores, to see that internal leadership makes it a win.”

“It’s a fun tournament,” said Mehlhorn. “It’s a great learning experience. All of it.”

Stanley Cup and Conn Smythe-winning Philadelphia Flyer Reggie Leach advised the Ontario South team and spoke to The Eastern Door about the tournament, and the state of hockey for Onkwehón:we players.

“Overall it’s actually really great; a lot of good talent, a lot of good games,” said the Ojibwe winger of the tournament. “It’s very, very, very well organized by Membertou here, so that’s a plus.”

Leach played on the Stanley Cup winning Philadelphia Flyers team in 1974-75, is one of five players in NHL history to win the Conn Smythe on a losing team, which he did in 1976.

He said there are many opportunities for Onkwehón:we players today that were not there when he was playing, but that players need to learn to take advantage of them.

“That’s one of the things we have to work on as First Nations people. We have so many raw talents out here, but they’re happy in their own little environment, and we have to find a way to get them beyond where they are today, to get them onto university and get an education and go play in the best leagues around to show their talents if they’re that good,” said Leach, the right winger nicknamed the Riverton Rifle.

Leach is an example of this. He left his home at 15 to play with the Flin Flon Bombers in Saskatchewan before going pro where he played for 13 seasons.

“Those are the things that these kids have to understand is that to be successful, you have to move on, and you’ve got to work on it,” he said. “You can’t depend on anyone else.

Leach said hockey today is made for Onkwehón:we kids, though with room for improvement.

“The kids can skate, they can stick handle, and today hockey that’s the way it is,” said Leach. “We as First Nations people need to learn to pass more, but that’s something that’s coming, and they have to learn that if you’re a superstar in a small community, you need to share the puck. You got to share it to be successful.”

Leach was part of the L-C-B line that included Bobby Clarke and Bill Barber, and knows what it means to share the puck.

Leach, who travels across the country promoting hockey in Onkwehón:we communities, said skill without commitment and the decision to go beyond the community is all for not.

“I hear this right across Canada, ‘I could have been this. I could have been that,’ but you’re not,” said Leach. “You make the choice not to do it. Don’t blame anybody else that you don’t play in the National Hockey League or semi-pro or some university because it’s up to you what you want to do; nobody else.”

Games at the NAHC run for the rest of the weekend.