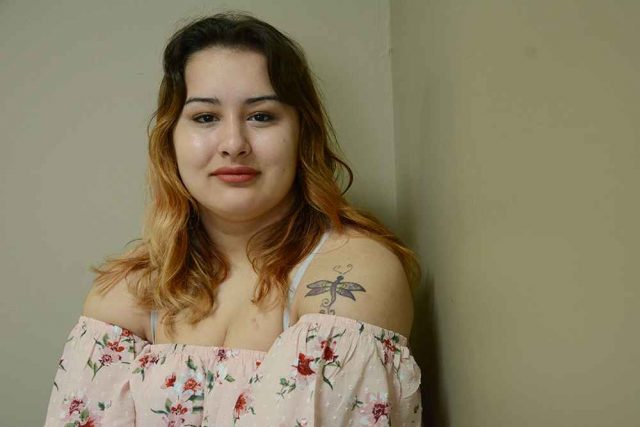 For Tiohawíhton Peterson, teachers are a huge inspiration for her continued passion towards learning Kanien’kéha and passing it down to future generations. (Daniel J. Rowe, The Eastern Door)

To learn Kanien’kéha, one must have a teacher.

Teachers, for Tiohawíhton Peterson, continue to play a huge role in her two-year journey in the Kanien’kéha Ratiwennahní:rats Adult Immersion Program, and it was a teacher that first prompted her to get serious about learning her language.

“I had this teacher, Tewennih’tokon Sharrow, and he kept going on and on about how important it was to pass on the language, and that it was a job that he really enjoys doing,” said Tiohawíhton.

“He gets to build bonds with children in the high school wherever he goes. He doesn’t see a lot of people take interest in the language anymore. They don’t think it’s as big of a deal, and after hearing that, it really got me to want to further my education.”

The suggestion that some make in relation to learning a second language is something Tiohawíhton does not agree with.

“I feel the language is very important and it can get you a lot of jobs in the town and in the confederacy. A lot of people want to learn.”

Part of what drives her passion is the place the language plays in her life personally and her community as a whole.

“The language isn’t dead,” she said. “The language is a part of our identity. It’s not a whole thing, but it’s what differentiates us from all the other nations in the confederacy, and it’s what gives us our place.

“We should be speaking our own language while we have it. Try to revitalize it. That’s what I think is very important.”

Going into the program, Peterson had a solid grounding in the language having attended Karonhianónhnha Tsi Ioterihwaienstáhkhwa for elementary school and Kahnawake Survival School after keeping a 90 percent average in her Kanien’kéha classes.

Learning new concepts and gaining fluency just made her want to learn more and more.

“I found it really interesting to learn the language and to dive deeper,” said Tiohawíhton. “Just the vowel sounds and to learn some words. I wanted to understand what those words meant.”

Tiohawíhton returned to the importance of teachers, and their role in not only providing the material, but also creating an environment students are excited to be in.

“You can have a teacher that will flat out do their job. They’re only there to teach you what they’re getting paid for,” she said.

“To be a real teacher is to love what you’re doing, to make every day interesting, to relate to your students, your peers. It’s not just the classroom. It’s everywhere. They’ll give you any kind of lesson anywhere you want and you don’t feel afraid to ask. They don’t intimidate you. Instead of oppressing you, they find a way to let you up and enjoy what you’re doing.”

Karhó:wane McComber and Tehokwiráthe Cross are two such teachers for Peterson.

“I see him (Karhó:wane) as a great inspiration and Tehowiráthe as well,” said Tiohawíhton. “He (Tehowiráthe) told us that you’re allowed to make mistakes. If you’re not making any mistakes, something’s wrong. You need to make mistakes to prosper. They gave me a lot of courage and pride, and I’m not afraid to try to speak to anyone.”

“I’ve gotten the confidence to speak,” she said. “Before I wasn’t very confident and I was afraid to mess up. I didn’t want to say anything I was going to regret, but now I can ask anybody and they’ll help me.”

Tiohawíhton’s sister Iawenhontsaieshon Peterson McGregor is also a solid speaker. She is graduating from Kahnawake Survival School in June, and considering the immersion program as a post-secondary option. The two, along with mother Lisa Peterson, try to bring as much language into the home whenever they can.