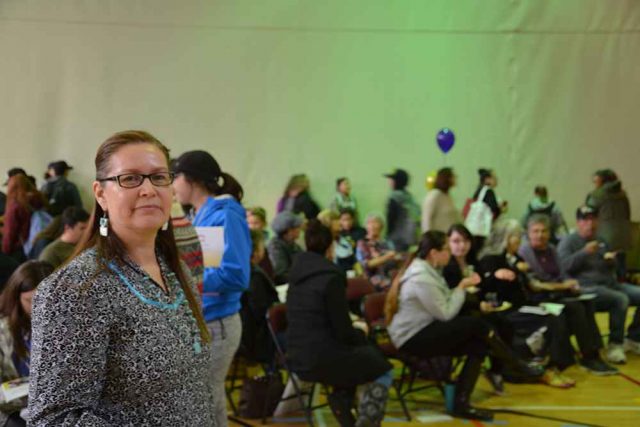 “There are a lot of people who want to learn but can’t afford or it’s not feasible for them to stop working and go to school full-time, when there’s a lack of support in terms of funding,” said Kahtehrón:ni Iris Stacey. (Daniel J. Rowe, The Eastern Door)

Language revitalization is the focus of a report released last week for cultural awareness month.

“The overall community goals were based on where we are at in terms of Kanien’kéha right now,” said Kahtehrón:ni Iris Stacey, the Kanien’kehá:ka curriculum developer at the Kahnawake Education Center (KEC) and one of the leads on the key report.

Despite Kahnawake’s long history of language revitalization efforts going back almost five decades, and many successful programs, Kanien’kéha is in an endangered state.

Based on Fishman’s Graded Intergenerational Disruption Scale, the community’s language is situated at stage seven out of eight.

“There are eight levels that talk about where we are in terms of language loss. Within each level, it tells you the steps that need to be taken to move up a level to a more secure place for language,” said Stacey, who has done extensive research on the history of language revitalization in Kahnawake as well as on national and global issues in Indigenous languages revitalization.

“One of the indicators at stage six talks about the most important stage in language revitalization, or language stabilization – having the language being used across three generations. That means children, parents and grandparents using the language together.”

That’s one of the biggest struggles currently facing Kahnawake.

“We do have younger people speaking, or some older ones, but we need to get to a place of consistency where we see that more. Having the overall goals is helping us as a community to really be aware of where we need to move toward. We all have our organizational or project plans, but to really think about how we’re contributing to help that happen,” said Stacey.

With the support of the Kanien’kehá:ka Onkwawén:na Raotitióhkwa Language and Cultural Center, and the Iakwahwatsiratátie Language Nest, the KEC organized two strategic planning sessions for “Skátne Enionkwaió’ten” (We will all work together) to develop a five-year strategic plan for language revitalization.

The report was launched last Friday afternoon at Kahnawake Survival School (KSS) as one of the final events for Cultural Awareness Month.

“We wanted the launch to really celebrate all the work that was put into it, and acknowledge everyone who was a part of moving it forward,” said Stacey. “It was really great because we had a lot of community who came out, those who participated as well as the study body at KSS.”

The report, which is available at the Ed Center as well as online, offers a number of recommendations and goals for the community to commence in the next five years, including reforming existing programs for optimal proficiency, create more accessible learning opportunities for those attending school outside of the community and work fulltime, the creation of an immersion program at the high school level, add a third year or one year of advanced proficiency level for Ratiwennahní:rats.

“When we’re looking at recommendations, it was looking at the opportunity for learning, what exists, so what are some of the gaps. We’re hoping to have some of those gaps addressed,” said Stacey.

“There are a lot of people who want to learn but can’t afford or it’s not feasible for them to stop working and go to school full-time, when there’s a lack of support in terms of funding.”

The project was being funded by a $51,791 grant received through the Aboriginal Languages Initiative (ALI), as well as through the Ed. Center with the goal to strengthen all Kanien’kéha language revitalization efforts through a whole community approach, and to foster an increase in community collaboration to meet the needs of the community.

“Those who participated in developing a plan, and being a part of it, is also a commitment on their part to move things forward. We have our plans in hand, and now we have to do the work to move them forward,” said Stacey.