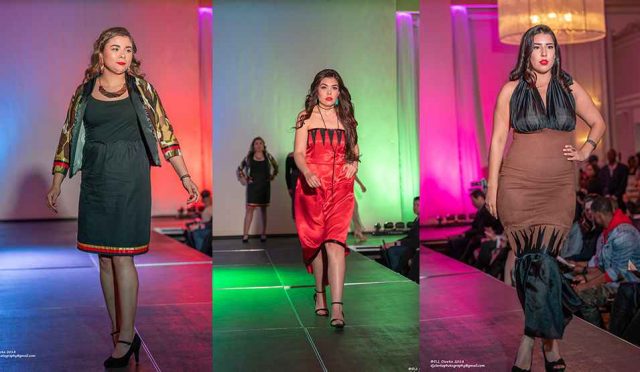 Karoniénhawe Diabo launched her brand She Holds the Sky Designs about a year ago. (Courtesy D.J. Clarke Photography)

The local fashion scene has a new edge, and it comes courtesy the chic, vintage creations with a local flair of She Holds the Sky Designs by Karoniénhawe Diabo.

Diabo launched the brand about a year ago, and unveiled a 14-piece collection at the AEC Interfashion show in Gatineau Saturday.

A month ago, an organizer asked Diabo to submit a collection for the show, and the designer got to work.

“I wasn’t 100 percent prepared at that moment, but I immediately started putting things together of ideas I already had,” said Diabo.

The result is a blend of classic vintage style with the cultural nods anyone in Kahnawake wouldn’t fail to notice. Diabo’s pieces range from a chic camo-print bomber jacket over a classic black skirt and top combo with ribbon trim, to her flaming red warrior dress, to a yellow floral-print, full-length dress.

“I don’t want to do the same thing that a lot of Indigenous designers are doing right now,” said Diabo. “I want to show people that I can do more than just traditional outfits. I can do gowns. I can do leisurewear. I can do bridal. I’m a trained seamstress. I can do these things.”

In addition to spanning the rainbow of colours, Diabo’s collection and brand also seeks to deck out all sizes of women in style.

Raven Beauvais walked the runway for She Holds the Sky and spoke about having a designer approach her to take part.

“I was surprised when Karoniénhawe included me as one of her models. Knowing that she is willing to make plus-size is very exciting,” said Beauvais.

“I’ve been bullied in the past because of my weight and doing this modelling gig made me feel so much better about myself.”

“Karoniénhawe did an excellent job distinguishing her clothing line as traditional Haudenosaunee meets contemporary,” said Swamp. “It was a privilege to walk the runway with Kahnawa’kehró:non and community members from our sister communities throughout the confederacy in clothing that emphasized our Haudenosaunee roots.”

Diabo started She Holds the Sky designs from humble roots.

“People knew I could sew, and they would ask, ‘could you do this for me?’ so I would just do it,” she said. “I never really put out my name like that.”

Diabo’s constant inspiration and cheerleader is her grandmother Estelle Diabo who constantly encourages the young seamstress.

Wanting to stay home with her two-year-old baby, Tehotenie’tawén:e’, and seven-year-old son Tionatáthe, Diabo decided to start selling designs from home and online first to family and then via word-of-mouth.

“In August, I decided that I’d be able to do this and balance it, and I’ve been working ever since,” she said. “I haven’t had a break or anything.”

Last year, Akwesasne designer Tisha Thompson asked Diabo to be a part of the AEC Interfashion show, which Diabo jumped at.

“She was looking for designers, so she put it on social media that they needed Indigenous designers,” said “I was like, ‘I can do it,’ not really knowing what I was getting myself into.”

Diabo took a half dozen designs, and got her first taste of the runway world at last year’s show.

“I had no clue what I was doing,” she said. “There were a lot of beautiful outfits. These people had been doing this for years and years. This is what they do every day. They’re fashion designers and I just showed up there with my baby and my mom and put a few outfits on. I did okay.”

After her experience last year, she knew next time she would go all in.

“I knew if I ever had another opportunity, I would amp it up and I knew exactly what I wanted to do,” said Diabo.

Diabo explained her design aesthetic to The Eastern Door.

“What I really like is vintage; classy, more feminine colours. I like simplicity, but I also like it where they’re comfortable. That’s most important. Whoever’s wearing my clothing, they’re going to be comfortable in it, and they can wear it every day.”

The references to her culture she does with care and consideration, she said.

“I’m not just going to stick something on there, and say, ‘here. Buy it. It’s Native.’ That’s what non-Natives do to our clothing. They don’t understand the purpose of it,” said Diabo.