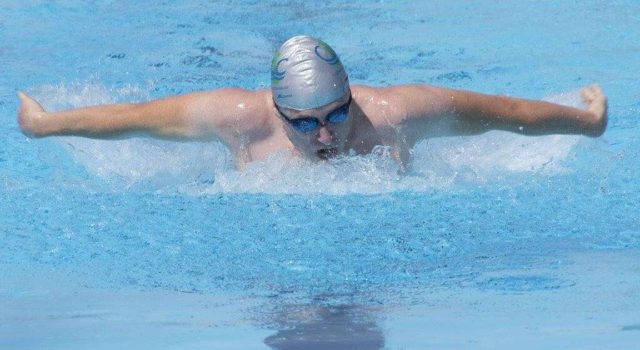 Calvin Jacobs may be in the top 10 swimmers in the world in his age group by the end of the year. (Courtesy Candida Rice)

The competition may soon dwindle to dolphins and guys whose names rhyme with Blikel Blelps for Calvin Jacobs, who, at 55, broke two provincial swimming records and medalled in five out of five events at the Masters Provincial Championships at the University of Laval PEPS (Pavillon de l’education physique et des sports) on the weekend.

In the 400M Medley, Jacobs beat runner up Len Gushe by over 20 seconds and the previous provincial record by 16, and touched the wall at 5:22.23.

In the 800M Freestyle final, his closest competitor was almost two minutes behind him, as he again beat the provincial record by nine seconds, and touched the wall at 9:55.21.

Jacobs swims out of the CACM (Chateauguay Masters) and just graduated to the older age group, but that has not slowed the tireless swimmer’s routine.

Jacobs also took home silver medals in the 400M Freestyle and 100M Butterfly, and a bronze medal in the 200M Butterfly.

Jacobs is incredibly focused and disciplined in his swimming routine, and the work pays off.

His dedication is bred out of a love for jumping in the pool and working his strokes to the best of his ability. It’s a labour of love.

“Swimming for me is my passion,” he said. “As my wife (Candida Rice) would say, ‘you will still be swimming well into your 90s.’”

His 400M Medley time this week will put Jacobs in the top 10 in the world for his age group, he added. The 200M Butterfly time may also put his name on the top 10 list, but he will not find out until the year’s end.