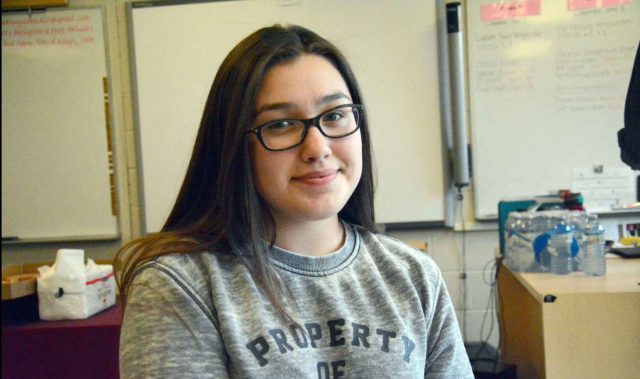 Kahnekanoron Canadian is ready to hit Dawson College running in the fall as one of the around two dozen students from Survival School that will be pursuing their education beyond secondary school. (Jessica Deer, The Eastern Door)

To celebrate the 40th class to graduate from Kahnawake Survival School, teacher and former principal Tewenhni’tatshon Louis Delisle hosted a luncheon for the graduating students at Survival last week.

Delisle noted that the 33 graduating students brings the school a step closer to having graduated 1,000 students.

“KSS has been thriving for 40 years, and KSS will continue to do so for the next 40 years,” he said.

Students had the chance to relate their experiences at the school, chat about their plans, and encourage one another as they head beyond secondary school next year.

Champlain College St. Lambert graduating students Jennifer Paul and Kale Phillips gave the students a word of encouragement, challenging the Survival grads to shine light on themselves and share their unique stories.

“It’s amazing to see all of the opportunities they have in their future,” said Paul. “They’re so young, and, even though it was only three years ago when we graduated, they’re so many different paths laid out for us… We hold so much more about our culture and our language and our history that we’re not a typical student, and almost everyone is willing to listen when you’re at an outside school.”

Phillips advised graduates to remain focused and not fall into the plethora of traps that can derail students during college.

“Surround yourself with people who are going to help and lift you up with your studies,” he said.

“Have someone good with you, to keep you going and try to avoid distractions as much as possible. I find once you get distracted, your focus comes off of what you do and that’s when all the goofing off starts, and people start wasting their time on other things, and not putting their time to good use completing their tasks and managing their time efficiently.”

Hannah McGregor-Pelletier will follow Paul and Phillips’ lead, heading to St. Lambert for the fall and study psychology.

Kahnekanoron Canadian will enter the three-year social services career program at Dawson College next year, and spoke about why she wants to become a social worker.

Konwanakeren Diabo will graduate this year and spoke to the group of graduates about switching schools to attend KSS for her high school years.

“When I came here, it was scary, but it was also one of the most comfortable experiences during the first day of classes because you know everybody,” she said. “I grew up with half of you guys at Karonhianónhnha and you are just so used to everybody and being in this environment. Plus, you’re learning about yourself, so it makes everything so much more comfortable.”

A board along Survival’s main hallway displays those that have already been accepted to CEGEPs with more likely on the way, including those who have applied for the Ratiwennahní:rats immersion program. Acceptance notifications for next year’s immersion program will go out in May.

More than 20 of the 33 upcoming graduates have plans for next year in place.

For Paul and Phillips, the couple knows the road is not simple, straight or smooth at times, but both were excited to see grads from their alma mater challenge themselves to take it nonetheless.

“I know we weren’t sure what exactly we wanted to do, and I’m sure they’re feeling the same exact way, but just to see their ambition in their eyes, knowing that they’re attending CEGEP in the fall, that they’ve finally graduated high school, it’s amazing to see that they’re finally pushing to better their future,” said Paul.

Canadian said breaking out of the shell in Kahnawake may be part of why more and more KSS grads are deciding to pursue post-secondary studies.