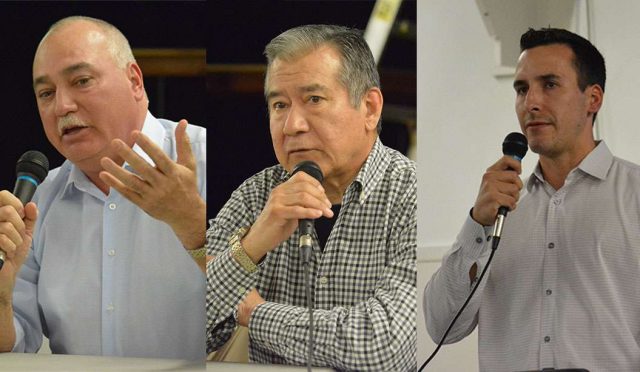 Up to 200 electronic gaming devices (EGD) could be coming to Playground Poker Club and Poker Palace by this fall.

The two poker houses held an information session Wednesday evening at the Knights of Columbus hall to unveil the three-year pilot project between the private companies and the Mohawk Council of Kahnawake (MCK).

“Our respective projects are not targeted at our local people. We’re looking at ways and using this project as a means to get outside dollars into the community,” said Playground CEO Mackenzie Kirby.

“As we all know, there’s a lot of needs within the community and we feel that this mechanism is just one way that we can help meet some of those needs.”

Playground approached council with the idea in 2016, and on Wednesday presented their market analysis and economic benefits from employment opportunities, tourism, community initiatives and investments.

“This pilot project will become a revenue generator for the community. It is a three-year project, but within that three years, as a part of the agreement we’ve reached with council we’ve set a minimum guarantee from both our properties of $6 million,” said Kirby.

Paul Rice, the executive financial officer at the MCK, explained the structure of the deal.

“In this case, it is a legal partnership. We’re looking for partners in the business sector that are good at operating business. The other thing that we don’t want to do a lot of is risk the community’s money in terms of business-type investments,” he said.

David Montour, chief operating officer, said in addition to the money given to council, Playground would be offering equity opportunities directly to community members.

“We’re offering up about 1.5 million shares priced at $5 a share, and that will be at any level. It’s not just for the rich, we really feel that we want the community to benefit from this, and that opportunity is going to be put up,” he said.

Slot machines, video lottery terminals (VLTs) and other electronic gaming devices have been barred from the community social clubs and convenience stores since 1994, when council voted to forbid them following complaints.

There have also been three referendums that voted down the idea for a casino, most recently in 2012 that had 846 community members voting against a gaming project, with 822 in favour.

Mohawk Council gaming portfolio chief Gina Deer was firm with her position that the agreement to have EGDs installed is not a casino.

“We’d like to say that it’s important that we continue these public and private partnerships. It was one of the objectives of this current council, revenue generation was also a part of that and this project falls within those two categories,” said Deer.

“This is not a casino. You have one element that you may find in a casino, but it doesn’t make it a full-blown casino. The proponents want to give back to the community and that’s a nice shift that we’re seeing at MCK.”

“If you go by Webster’s definition of a casino, it’s any facility that has any kind of gaming whatsoever, so Cage aux Sports is a casino because they have machines,” said Myiow.

“My building has been designated for gaming for the last 10 years. When you pass by my building, you’re going to see cars in the parking lot. There will be no change in your life or anybody else’s if we have machines in there.

“All we’re doing is evolving slightly into a place where we can afford to give money to the community.”

Other community members expressed concerns about job creation benefitting Kahnawake workers, concerns about gambling addiction, and the limited consultation done before the agreement was announced in February.

“We felt it was an opportunity to be able to have some financial gain to the community, and also, as private businesspeople, to be able to do something to benefit us all,” said grand chief Joe Norton.

“This is a pilot project and it’s a three-year agreement and an understanding. There’s no need to have a referendum on that.”

Both Playground and Poker Palace representatives said no EGDs have been purchased yet, nor is there a slated date for when they will be installed and open to the public – both are dependent on when they receive their conditional licenses from the Kahnawake Gaming Commission.