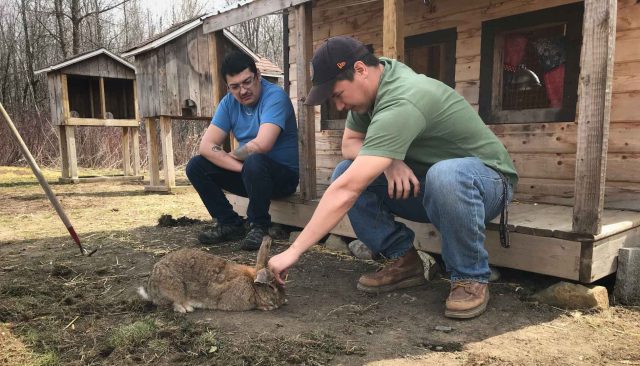 The innovation and traditional knowledge taught at the First Nations Regional Adult Education Centre earned the school recognition from the EdCan Network.

The centre’s The Roots for Life Program, was selected as a co-winner of the network’s Ken Spencer Award out of nearly 100 educational institutions across Canada.

“We have recognized Indigenous learning programs before, but never one quite like this,” said Max Cooke, interim CEO of the network.

This was the first year that they honoured an adult education center, and decided to pick co-winners for first place. The FNRAEC shares the title with Farm Roots Mini School from Delta, BC.

“In this case, we felt there were two programs that were fairly similar, but both merited getting top billing this year,” said Cooke.

The $5,000 award, named after the British Columbian entrepreneur and former EdCan Network board member, recognizes innovation in teaching and learning.

“He felt that innovation that’s taking place in schools across Canada needed to be better promoted to be able to recognize the courageous educators that wanted to try something different, because to innovate, you’re always having to do something more than what’s already there,” said Cooke.

“He also wanted to create an award because he wanted to be able to take a good look at what’s happening in a winning school or school district, and be able to share it with other schools across Canada.”

“Winning this award for doing it the way that we do it, it highlights to me the importance of using different approaches and being able to actually incorporate an Indigenous worldview in a learning process,” said the centre’s director Diane Labelle.

“This program shows that that’s exactly what is needed to work. We want students not only to reconnect with culture, language and the land, but also to find different ways to motivate themselves. In being in control of their education, that’s exactly what happened.”

Tiio Hemlock teaches the program’s sustainable living class every Tuesday and Thursday morning, while the projects they focus on are interrelated with the students’ other courses required to attain their high school diploma.

“Adult education welcomes students who are very disenchanted with education. They’ve gone through the education system and for whatever reason have had to leave. To be exposed to the same education system where they’re being dictated as to what to do and how to do, it’s not helping them. We need to be able to find new ways of them feeling empowered with their own education.”

While Hemlock has been teaching the class for four years, he said his role is more of a guide and helper. Past students have learned how to wash corn and make mush, split, build a picnic table, plant, forage and many other traditional practices.

“Nearly all the work we do is not in the classroom. The first year I started them off by working in the community garden and helping community members where they could,” said Hemlock.

“From there I asked them what they wanted to learn next and they ran with it in terms of the kinds of projects they wanted to do. They built two chicken coops, a greenhouse, compost pits, learned how to identify and prepare traditional medicines, raised and slaughtered chickens, sold eggs along with tending to rabbits and bees.”

Last year, the centre also got the attention of the Paul Martin Foundation, which provided the funding for material for students to set up their own hydroponics systems. Hemlock said this semester, the six students in the class are learning how to construct timber framing and will use a part of the prize money to buy logs to build a gazebo.

“Beyond that I’m not sure what the money will be used for, only because the students have yet to decide what they want to do next,” said Hemlock.

The student-driven aspect of the class is what got the attention of the jury selection committee for the Ken Spencer Award.

“These young people are driving their own learning. That’s so key, not just for this program, but if we could see this in other places across Canada – the amount of dropouts right across the board – I think there are elements of this program that could be shared and inspire,” said Cooke.

“It’s often the student who has to adjust to the school. That doesn’t work for these young people, so why not try to put them in a position of empowerment where not only do they follow through on what they want to learn, but they work through all the problems and challenges that are required for success?

“The fact that it also integrates traditional knowledge and connection to the community, it’s just fantastic.”