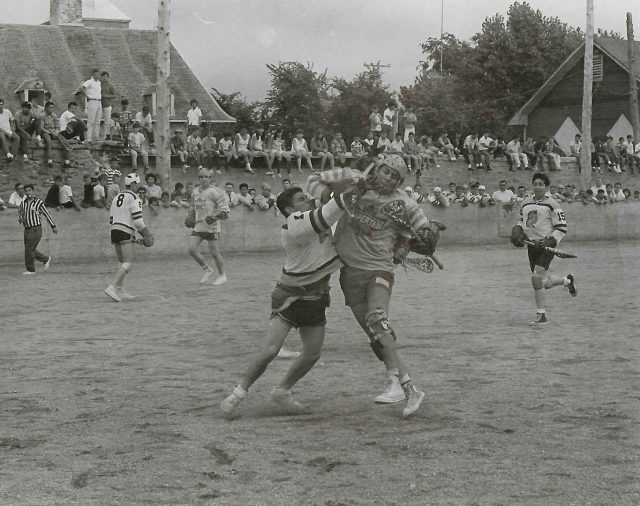 “My brother Pidgie was only 5’6”, but he lived his life like he was 6’5,” said Joe Norton, as he remembered his older brother who played with lacrosse and hockey legends, who will all remember his incredible skill as much as his caring personality. (courtesy Janice Norton)

“He just loved hard. He had such a big heart,” said Janice Rice, of her husband George “Pidgie” Norton, who died last week at the age of 71 after a short battle with cancer.

Janice and George have been together 37 years and married for 27. George first noticed something might be wrong with his health when he travelled with friends to Arizona in November.

After a series of medical checkups and scans, he was diagnosed with cancer of the esophagus on December 20.

He called his brother Joe Norton shortly after getting the news.

“It was very shocking to me,” said Joe the seventh child. “It was a situation that was so unexpected. It’s usually that way, ‘why him?’ kind of thing.”

Joe visited his brother every chance he had in his final months, and Janice took care of her husband at home for seven weeks before an issue with the feeding tube required him to be hospitalized once again.

“It was very fast,” said Janice. “By the time they gave us the diagnosis, the cancer was metastasized, and it was very aggressive. They told us right away that it was inoperable.”

The hockey and lacrosse legend, ironworker, avid golfer and friend to many, died last Wednesday April 11.

He leaves behind two daughters, Kim and Dawn, with his first wife Valerie Delisle, and was very close to Janice’s daughter Audrey and son Keith, in addition to the couple’s grandchildren.

Pidgie was the sixth of Peter and Hazel (Hemlock) Norton’s 12 children. He was predeceased by his eldest brother Louis “Sonny” and sister Selma Delisle. He is survived by his siblings Edna, Elizabeth, Roger, Joe, Esther, Jennifer, David, Faye and Timmy.

Pidgie was a legend in the lacrosse box, and on the ice as a hockey player, and leaves behind a large pair of shoes not soon to be filled.

He last grabbed his lacrosse stick and took to the box at the Bell Centre in an exhibition game played prior to the Team Canada v. Iroquois Nationals in 2013.

He became the only Kahnawa’kehró:non to have played lacrosse at both the Bell Centre and the legendary Montreal Forum.

Pidgie played with many legends of hockey and lacrosse, including Serge Savard, who told his brother Joe what it was like to play Pidgie, who played junior hockey with the Lachine Maroons.

After news of the diagnosis got out, friends and family immediately began showing support.

“Every day he had one of them in the house,” said Janice, who tried to get her husband home in his final days, but was not able to due to his rapidly declining health.

Taking care of Pidgie was something Janice said she would have continued to do, regardless of him ringing a bell all day and all night when he needed care.

Joe and his elder brother by two years were always close. Joe recalled the two of them doing chores around the house as kids, but as Pidgie’s sports career took off, Joe joked, the jobs were left to the younger brother.

“I was resentful because then I would have to do the work around the house, and he was off playing sports,” Joe said with a laugh. “I said, ‘why isn’t he here?” And he (their dad Peter) would say, ‘he has to play sports,’ and I’d say ‘that’s not fair.’”

Joe said his brother was a constant comfort to the two-time grand chief of the Mohawk Council of Kahnawake. Before deciding to run a second time, the first person Joe sought counsel from was his brother.

“The first thing he said to me was, ‘it’s up to you, but think about your health before you do something like this,’” said Joe.

It was typical Pidgie; caring about the person before the politics.

“He came at it from a very sound advice approach,” said Joe. “He was my brother and he was caring about me… He was a very courageous man.”

Floyd Lahache worked with Pidgie as an ironworker, and met him every Thursday for brunch with Eugene “Bear” Diabo and Ben McComber.

“They sort of took me under their wing,” said Lahache. “They showed me a lot. I learned a lot from them.”

Working for Pidgie was always pleasant, always willing to help others learn skills he picked up in the trade where he worked for 52 years with the catchphrase, ‘pay attention. I’ll show you.’

“He was an easy guy, very easy,” said Lahache. “When you’re working in a raising gang, it’s like a little family. You all have to get along because you have to work as one… He never yelled at anybody and always had a nice cigar in his mouth, everybody laughing and joking as we’re working.”

When the Kahnawake Fire Brigade needed a new building, Pidgie rallied a team of ironworkers to donate their skill and time to complete the job.

“They built that new fire hall – nobody got paid – but they took pride in the work that they did, and not one of them said, ‘no. I’m not getting paid. To hell with that. I’m not going.’ Not one of them said that. They all showed up for work,” said Janice. “Everybody respected him so much. The men looked up to him.”

His character is something that will leave a huge void in Kahnawake.

“He led by example in a lot of different ways that people look at as being a very appreciated, solid and, in his own way, a leader in the community,” said Joe.

“He learned from the old men who taught him and he carried that with him to the newer guys,” said Janice. “Pidgie had a memory like you wouldn’t believe, so everything they told him, he told them…I used to call him my book of knowledge. That man absorbed everything that was told to him.”

Janice said Pidgie took the best of both parents.

“He always said he gets his knowledge from his mother and he gets the wisdom from his father,” said Janice.

Though he excelled in hockey, lacrosse and ironwork, he maintained a humble, stoic approach to life.

“He took pride in everything he did, and he always excelled,” said Janice. “He always had to be the top, but not a bragger. He always said, ‘just get ‘er done. Just do it.’”

What will Janice miss the most about her departed husband?

“Him. Our life together. We had a good life. We loved each other and had many adventures,” she said. “I always called him my partner in crime.”