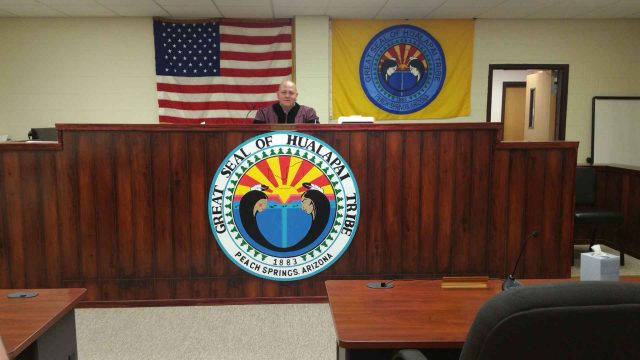 Kaniatari:io Jesse Gilbert is no stranger to the courtroom, but recent good news means he will no longer have to say “your honour,” but instead will be using that prestigious title.

As the new chief judge of the Hualapai Tribe’s Tribal Court (trial level), Gilbert’s hard work as a lawyer is really paying off.

“I feel good,” he told The Eastern Door. “Monday (April 16) felt sort of surreal. I was repeating the words of the oath to the chairman back to him, but my mind was racing with a lot of other thoughts, memories, and feelings. I almost do not remember actually doing the swearing in.”

After law school, he spent a year as clerk for the Federal Public Defender’s office in Phoenix; was a state public defender in two Arizona counties (La Paz and Maricopa) for about 4.5 years doing criminal defense work; and has been the director of Legal Aid for the Colorado River Indian Tribes in Parker, Arizona for almost five years.

“That included mostly what CRIT calls “Child In Need of Care” cases (what many jurisdictions call “dependency cases”” which is when there are court cases because Social Services removed a child from its parents’ custody,” he said.

According to Gilbert, having a law school-trained judge is a rarity in those parts.

“Sometimes that is just because their laws/rules require that judges be community members, and then they do not have any (or very few) attorneys who are community members; sometimes it is a function of geography – and the difficulty of getting attorneys willing to commit to rural/remote areas,” he said.

Gilbert has support from his family, including his father Tiorahkwathe and mother Dodie, but he also had nice words for the Maricopa County Public Defender’s Office.

“They have a tremendous litigation training program that helped prepare me for what I wanted to do in my career,” he said.

Gilbert’s election as the youngest-ever Mohawk Council chief in 2002 helped him to understand more how things work in such a high-pressure environment, and lift him up.

“It gave me the opportunity to build confidence in my ability to work collaboratively (which, politically, was often difficult) with others and to also champion things on my own,” he said.

Land allotments – a portfolio no one wanted when he was in office – was something Gilbert welcomed. That file helped to push him to be better at his job.

Out of law school, Gilbert had the choice: a career as what he called a “transactional lawyer” – someone who researches and works on things like compliance issues, but rarely steps foot into a courtroom, and then what he chose; the litigation path.

“I thought that being a transactional lawyer was going to be a rather boring (albeit, usually more-lucrative) career,” said Gilbert. “So, I have been in courtrooms almost every day for the last 9.5 years, appearing before judges or juries, so I am comfortable in a courtroom setting.”

The tough part now is learning the local laws and applying them.

“For instance, as a litigator in state court (or federal, and even at CRIT), the Rules of Evidence strictly applied in most cases in which I was involved,” he said. “But that is not the case at Hualapai – only some of the basic Rules of Evidence apply.”

This past Monday was his first day on the bench and he was already looking at ways to “tweak” local laws, but he can really only push for so much change.

“I may prefer that the other ways be used here – but the Tribes have passed their own laws, and it is going to be our responsibility to uphold and enforce our own laws here; not what we would like the law to have been.”