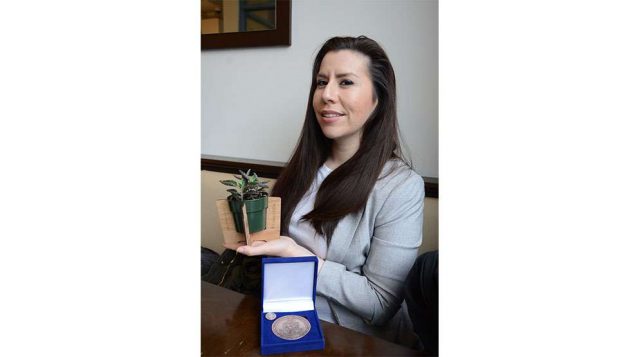 Engage and try and make change and you will be rewarded, much like Concordia student Wahsontiiostha Brooke Deer, who picked up two prestigious honours in the past week. (Daniel J. Rowe, The Eastern Door)

In between cramming for final exams, completing projects and applying for graduate school, Wahsontiiostha Brooke Deer took a pair of nights off to pick up a couple of awards.

The John Molson School of Business student at Concordia University was selected as a Sustainability Champion last Thursday, and awarded the Lieutenant Governor’s Youth Medal Sunday in Laval.

The sustainability award was humbling for Deer, who nominated a co-worker for the same award.

“I don’t think I’m worthy of it,” said Deer. “There’s a lot of people in my office, who I work with, who are amazing, and I know a lot of them have been nominated and some of them didn’t win, so when I found out that I won, I was pretty upset because my co-worker didn’t win as well.”

“Brooke has so many roles at Concordia, all while earning her undergraduate degree at John Molson,” Marquis said in a speech at the awards ceremony. “Her endeavours are not made in vain. They do not go unnoticed. She deserves recognition for her conscious efforts toward a sustainable Concordia.”
Deer sees the award as going to her entire food coalition concerned with the economic, ecological, and social implications of food systems.

Winning the award, for Deer, was a duty as much as an honour.

“Accepting awards is very much a responsibility,” she said. “Now I have to uphold these values.”

The accolades weren’t over for Deer, as she also received the Lieutenant Governor’s Youth Medal given by Quebec Lieutenant Governor J. Michel Doyon, the first Kahnawa’kekró:non to win the award since Champlain College Lennoxville student Rachel Leborgne won it at the CEGEP level in 2016.

The award is given to a student who has an inspiring attitude and positive influence inside a group, in addition to meeting the demands of their curriculum.

No one is more proud of Deer than her mother Hope Stacey.

“She’s so humble,” said Stacey. “She didn’t think she deserved these awards.”

Come June, Stacey will see Wahsontiiostha complete her undergraduate degree just like her sister and Eastern Door reporter Jessica Kanhehsiio Deer did in 2013.

Wahsontiiostha is in her final stretch of final exams and term papers, and wants to ensure that the Indigenous Student Council continues to function for future students. Having worked hard to establish the council, Wahsontiiostha, and the other graduating students in the council, will now leave their posts as undergraduates.

Wahsontiiostha was accepted this week to the master of science in management program for the fall at Concordia.

In the past year, Wahsontiiostha has been among the Indigenous students that have been in demand as administrators, students, teachers, media and others in the region and country have got on board with the reconciliation trend seeking advice and voices from Onkwehón:we people on a variety of topics.

“It’s been overwhelming this year,” she said. “There have been a lot of requests, which is part of the reasons I’ve been so involved… People want to jump on this theme of reconciliation.”

Wahsontiiostha said engaging with the university, working to make change for the better and getting out of her shell changed her experience at school dramatically. When she first entered university, her attitude was much different.

“I just went to class, left, (and) I didn’t engage with anything,” she said. “Somewhere along the lines, I started going to different talks or screenings because I realized the university and different departments bring in all these Indigenous academics and artists and filmmakers and I realized that I suddenly had access to all these people that I wouldn’t normally get to meet, and people who I was inspired by.”

One person Wahsontiiostha inspired was Marquis.

“Even with this busy schedule, she still has time to be a good friend and meet me for coffee,” said Marquis. “She has inspired me to reach my goals and to move beyond the boundaries of what I think I am capable of.”

Wahsontiiostha had some advice for students thinking about higher education or struggling through the growing pains of attending an institution like Concordia.

“It takes a while,” she said. “I think a lot of students give up within the first two semesters and decide automatically that school isn’t for them. I’ve had those feelings a million times and thought that this was not a system I want to be a part of. I thought what’s the point, but university has given me the opportunity to meet Indigenous people from all over.”