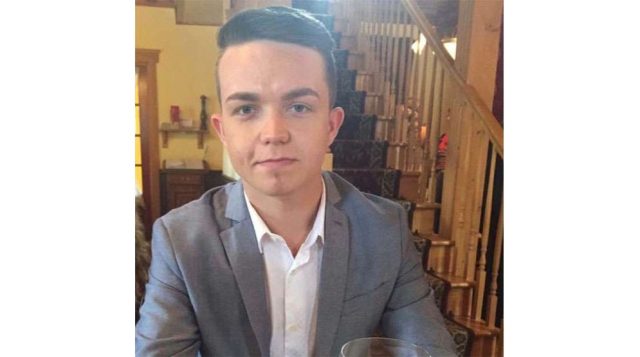 For his final year as an undergraduate student, Brandon Montour will be a member of Concordia University’s prestigious Garnet Key Society. (Courtesy Brandon Montour)

The Garnet Key Society’s mandate is to represent a positive image of Concordia University, and it’s something Kanien’kehá:ka student Brandon Montour is excited to take on for the final year of his undergraduate studies.

On May 12, the 20-year-old student from Kahnawake will be inducted as a member of the 61st Garnet Key, a voluntary group sponsored by the president of the university that act as Concordia’s official representatives.

“I am extremely grateful to have been selected to be a part of the 61st Garnet Key. I’m just going to make sure to capitalize on this opportunity and enjoy every moment of it because it’s a great opportunity to network with like-minded students,” said Montour.

Montour is wrapping up his second year at Concordia, studying political science with a minor in sociology. He was one of 12 students selected to serve the yearlong mandate based on high academic standing and involvement within their communities, on and off campus.

In the past, she’s served as big brother to children aged 10-11 years old at various after-school programs in Montreal, has organized leadership camps at his alma mater Selwyn House, and volunteers as a note taker at Concordia for students with disabilities.

“Everyone truly wants to make a difference within their community, within the school, and I think just being a part of it will be great because my goal is not to only serve as an ambassador to Concordia, but I hope I can use this platform to serve as a role model for the youth within my community,” said Montour.

An absence of Indigenous role models and mentors is something he said he experienced in high school, during his time at Marianopolis College and two years at the University of Toronto.

“I’m a first generation student that goes to university within my family, also recognizing that there are many structural barriers for Indigenous Peoples when it comes to being successful in a post-colonial state,” said Montour.

“I moved back to be closer to home because it was a little stressful being away from my family and to manage my studies. I wasn’t ready for it. Being at Concordia allows me to have my family with me, and I believed that helped me excel even more.”

After he graduates from Concordia, his plans are to apply to various law schools across Canada.

“My goal is to do something that betters the community. If I find something along the way that’s a different career path, will be more beneficial for my community or Indigenous Peoples in general, it is something I am going to do,” said Montour.

“I’m really into the area of political science that deals with the Indian Act, specifically, and just trying to change the way the government goes about things right now. I just want a career that will better society for Indigenous Peoples.”

Montour is the second person from Kahnawake to be a member of Concordia’s Garnet Key. The first was The Eastern Door’s editorial cartoonist and columnist Megan Whyte, who was a member of the 54th Garnet.

“Being part of the society was both an honour and a major responsibility. It was an honour to be recognized for academic and community commitment, but also a huge responsibility to liaison within the Concordia community and surrounding networks,” said Whyte.

“I’m glad to see another person from our community being recognized for their efforts and given the opportunity to make change and bring our identity on the map. Moments like these challenge the stereotypes we are up against and I am so proud of that.”

That’s exactly what Montour hopes to accomplish next school year.

“There needs to be more involvement within school life for Indigenous Peoples and it’s not something that’s really present in a lot of institutions right now, especially the ones that I’ve been to,” said Montour.

“There was a lack of awareness to all the Indigenous issues and structural barriers. Being a part of this group, I hope that I can bring awareness to as many people as I can.”