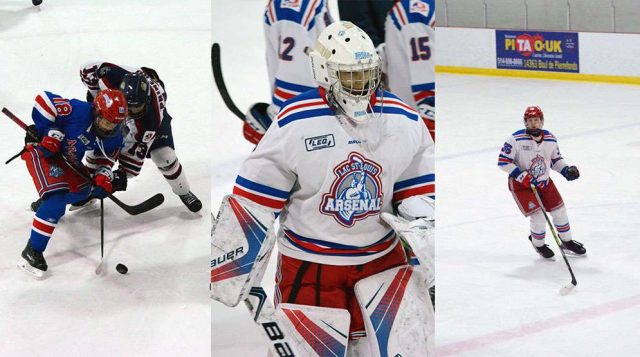 Ronwahrharaties “Bug” McGregor Norton’s Arsenal squad watched an unforgiving puck bounce into the back of the net in overtime, ending the team’s dream of making the Dodge Cup in Pierrefonds after two hard-fought games (left). Jesse Lahache Jr. had the tough task of watching from the bench as his team fell in the second of two playoff games, as the up-and-coming shot-stopper looks to cross the river and join his rivals next season (centre). Jayce Delaronde and Reece Glover-Kirby will join Kobe McComber and Mathaus Mehlhorn in representing Kahnawake’s elite boys hockey talent at the Dodge Cup this month (right). (Daniel J. Rowe, The Eastern Door)

With the Dodge Cup Provincial Hockey Championships set to start this week, the Sportplexe Pierrefonds hosted a full slate of AAA hockey action Saturday with some of Kahnawake’s young up-and-comers featuring on three rosters vying for a spot at the big dance.

Kahnawake’s Kobe McComber and Mathaus Mehlhorn have already booked a date at the cup with the Chateauguay Cougars AA Midget team, and the boys playing on the Lac St. Louis Arsenal’s Peewee AAA, Bantam AAA-Releve and Bantam AAA teams were all looking to do likewise Saturday.

Top puck-stopper Jesse Lahache Jr. was forced to watch from the bench, as his Peewee AAA Arsenal team was unable to keep pace with the Grenadiers in game two of two playoff games.

The Grenadiers won the first contest 3-0, meaning the Arsenal needed a win or tie to keep their hopes alive.

Tied 3-3 in the third, the Grenadiers pushed on the power play to break the tie and then ran away with the game.

“I thought I was going to go in. I was kind of mad,” said Lahache.

Loss aside, Lahache said he had a solid year for his final Peewee season.

“I loved it,” said Lahache. “It was better than last year.”

The reason was simple.

“My team and my players,” said Lahache.

Next season, Lahache will enter the sport etudes program at Howard S. Billings High School, and try out for the Grenadiers’ AAA Bantam squad.

He admitted it will be difficult to leave his Arsenal teammates, as having a reliable group of players in front of him helped his game a great deal.

“It makes me more comfortable in the net and calm,” he said.

Ronwahrharaties “Bug” McGregor Norton also had a tough final game of the season, and like his puckstopping mate from Kahnawake Lahache Jr. was forced to watch from the bench as his Arsenal AAA-Releve squad lost in overtime to the Grenadiers.

The Arsenal won the week prior meaning the Grenadiers needed to win to stay alive. The Grenadiers did just that and won 6-3 Saturday in regulation.

With one win apiece, the two teams played a 10-minute, sudden death overtime period to decide who would get a ticket to the Dodge Cup.

Bad luck struck the Arsenal team when goalie Dawson Labre mishandled a puck that fell unluckily to a Grenadier forward, who tapped it in. Game over.

McGregor Norton was frustrated at the result, but also that he didn’t get on the ice during the overtime period.

“It was really boring,” he said. “I didn’t really get to play. The coach played the same five players all game.”

McGregor-Norton played Peewee A for the Mohawks last year and made the jump to the AAA squad for his first year as a Bantam. He was happy to have made the jump, and challenged himself to play at a high level of hockey.

“It was harder than playing in town,” he said. “I got a lot of experience. The kids are better. You got to be committed to it. You got to go to all the practices. You’ve got to do all that stuff.”

McGregor-Norton will now get set to enter the Canadian International Hockey Academy prep school near Ottawa.

“I’ve been wanting to go since a year ago,” said McGregor-Norton.

The third game of the day Saturday was the final chance for a Dodge Cup date when the Bantam AAA Arsenal hit the ice against the Grenadiers after thumping their rivals in the first game 6-2.

“I knew they were going to come out, because it was their last game, and give it their all, but I found our team was a little too cocky,” said Arsenal defenceman Reece Glover-Kirby.

The Grenadiers scored early and often and ran the score up to a 6-3 regulation win, setting up a 10-minute overtime like their Releve counterparts.

After the four-on-four period, with neither team scoring, it was time for a shootout.

Heading into the shootout, Glover-Kirby admitted he was less than impressed with his team’s fight throughout the game and overtime.

“I was thinking we should have done better in the overtime,” said Glover-Kirby, who is paired defensively with fellow Kahnawa’kehró:non Jayce Delaronde. “I was thinking why didn’t we bury the chance when we had it?”

Shootout looming, the stay-at-home defenceman was forced to anxiously watch as his snipers took their turns.

“I couldn’t keep my cool there because I didn’t want to lose, so I couldn’t really watch it,” said Glover-Kirby.

Glover-Kirby knows his team has the talent to challenge at the cup, but also that the players must go into games with a level head.

“All we have to do is work together and play like we did, and not be as cocky,” said Glover-Kirby. “Whenever we work as a team, that’s when everything comes together and we win.”

The Bantam Arsenal play the Laurentides-Lanaudiere representative Wednesday at 5:30 p.m.