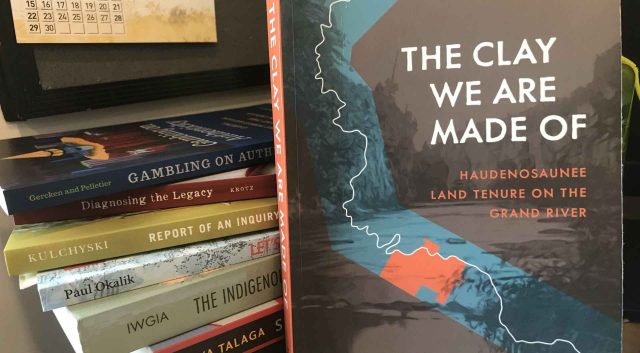 How do you get from the Creation Story to modern land grievances in Six Nations? One way is by exploring the community’s relationship to the land, and going from there.

For those looking for a book to read during Cultural Awareness Month, Susan M. Hill’s recently published The Clay We Are Made Of: Haudenosaunee Land Tenure on the Grand River (University of Manitoba Press, $27.95) is worth a look.

Hill bases the book on Haudensaunee cultural history and the confederacy’s relationship to the land, and then continues through the colonial era and then explores the various land disputes, resettlements, betrayals and attempts to reassert control through the second half.

The book is engaging throughout, and gives a unique look into the community and the nations that live there.

There are many interesting sections in the book.

The discussion of the controversial Karihwiyo – Good Message of Handsome Lake is particularly interesting early in the book. It is part of Hill’s discussion of the four epics that define Six Nations’ beliefs about land and her community’s relationship to it. The other three are: The Creation Story, the four ceremonies and the Great Law of Peace.

“While the Karihwiyo brought about new ideas in certain respects, its main focus lay upon reinforcing and maintaining the Original Instructions,” she writes.

Throughout her discussion of the four epics, Hill constantly draws readers’ attention to the connection to the land from a Haudenosaunee perspective.

Another chapter worth mentioning is the chapter “Kontinonhsyonni – The Women Who Make the House,” in which Hill looks at a variety of ways women relate to cultural teachings such as the Great Law and the creation story in addition to their roles in relation to the land.

In bridging the gap between the traditional cultural teachings and the territory’s troubling colonial context is where Hill finds her greatest success.

Once the cultural groundwork is laid, understanding the complexity of modern treaties (often betrayed), and other relationships is seamless.

The book is grand in scope, but is not too daunting to read. It would make a great addition to any course on land tenure, culture, history or modern Indigenous political theory.