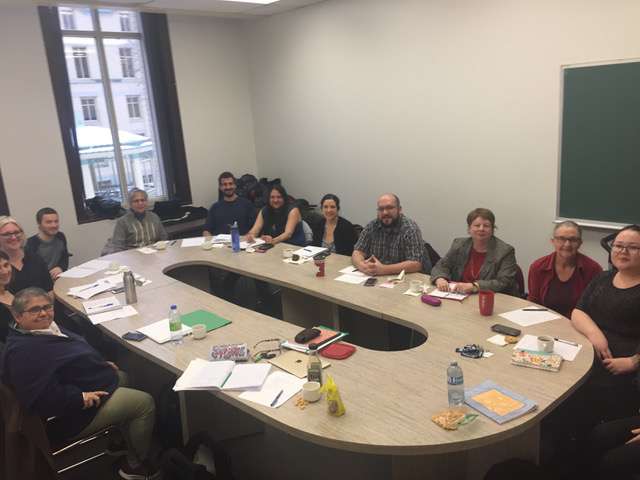 The network of staff from the five Anglo CEGEPs are eager to get on board with the TRC recommendations. (Courtesy Intercollegiate Indigenizing Initiatives Network)

From four students grew a group. From that group grew another, and now the five Anglo CEGEPs in and around Montreal are interested and working to indigenize their campuses and get on board with recommendations from the Truth and Reconciliation Commission (TRC), which challenged Canada’s education system to address historical wrongs done to its Indigenous populations.

“Last spring, there was a huge interest among all the English CEGEPs to get together and just talk about all the services that are being offered, what the curriculum movement is like because the TRC came out,” said Dave Persons, who works in student service support at Champlain College St. Lambert. “We were wondering as Anglo colleges, what can we do to kind of get on track and start fulfilling those mandates.”

The result is the Intercollegiate Indigenizing Initiatives Network, which, Persons said would not have happened without the example of the Indigenous Student Ambassadors at Champlain led by Kahnawa’kehró:non students Jennifer Paul, Kale Phillips, Belle Phillips and Tahothoratie Cross profiled in The Eastern Door.

“They were looking for help in sensitizing their staff in issues regarding Indigenous students, and it spread very quickly,” said Labelle.

With little delay, the other four CEGEPs jumped on board, and formed a single group. Labelle knew this would make the program more efficient for planning events, sharing resources, and costs for speakers or workshops.

Tiawentinon Canadian started as coordinator of the First People’s Centre at Dawson College in October, and is part of the network.

She spoke about one of the goals of the network.

“Our main focus is trying to get the administration of our colleges to really understand what we’re doing and why we need their support,” said Canadian.

The network has been eagerly embraced, and even hosted a meeting that included all the directors general and all deans for sensitivity training.

Paul shared with the network about growing up in Kahnawake, and the challenges many local students face at CEGEP.

“They were shocked and were unaware of how hard the transition is,” said Paul. “Many heard the same type of stories from Indigenous students at their schools and were able to relate.”

Paul said the ambassadors’ program coupled with the network has created real change she and her fellow Kahnawake students feel on the ground.

“A year ago, we never thought a project like this would be possible, but we’re paving a way for future students and they will be the ones that actually benefit from all the hard work we’re doing.”

Quebec minister of Native Affairs Geoffrey Kelley met the network in March, and is working with minister for higher education Helene David to meet the group before the summer.

Kelley told The Eastern Door he asked the group to come up with concrete short-term and long-term proposals to develop a roadmap to ensure the Indigenous presence is continually felt in the province’s CEGEPs.

“There are interesting challenges, but what I found encouraging was there was a lot of energy around the table, a lot of enthusiasm,” said Kelley.

Getting ministry of education support will be crucial to improve curriculum, student support and staffing issues, to include an Indigenous perspective.

“What’s needed basically is to get the ministry of education on board,” said Labelle. “It’s sort of like bending the boxes a little bit because the boxes are too stiff and the walls are just designed so that it limits what can be done.”

Labelle said securing long-term funding is one area that needs addressing in the future. Currently, the network is working on broadening faculty’s understanding of Indigenous issues, culture and history.

“They want to have simple things like faculty training, education programs for the current students, indigenizing curriculum, so starting to talk about the real history of Quebec and Canada instead of just what’s been mandated for us to talk about,” said Persons.

The goal is to look at the structures in place, and where they might need adjusting, a laborious task as any in the education system can attest to.

“They’re looking at creating some openings within their own CEGEP system because it’s a totally different administrative area,” said Labelle. “To be able to open it up so that we can create change not only within the classroom, but within the system itself to make space for Indigenous knowledge.”

Canadian said students mention they want stability in student services at CEGEP, which would require resources to maintain.

“What’s really important is that they have sustained relationships, be it with teachers or with academic support people like tutors,” said Canadian. “It’s not so much that these services are available, but that they’re with the same person, so that the student can go over time and trust is built.”

At the same time, members of the network do not want to come across as sensitivity police when promoting the program.

“There’s a hesitancy to ask teachers to take on further training,” said Canadian. “Within our group we discuss how do we convince people that they should do these sensitivity trainings, and how do we enforce it in situations where schools have, say, Indigenous studies certificates. We want teachers that are teaching those courses to have training, but we don’t want to impose anything.”

Land acknowledgement, specific course and program creation with an Indigenous worldview, and safe spaces within the campuses are some of the examples that have been floated.

According to the network members, the meetings have been incredibly positive thus far.

“So far it’s been really interesting to see how well it’s moving,” said Labelle. “Everyone is super engaged and positive and forward-thinking,” said Persons.

“Those meetings are one of my favourite parts of the job,” said Canadian. “It’s meeting with like-minded people who have the same goal and who are trying to break down these barriers that we’re all facing. It’s 10 minds working on the same project.”