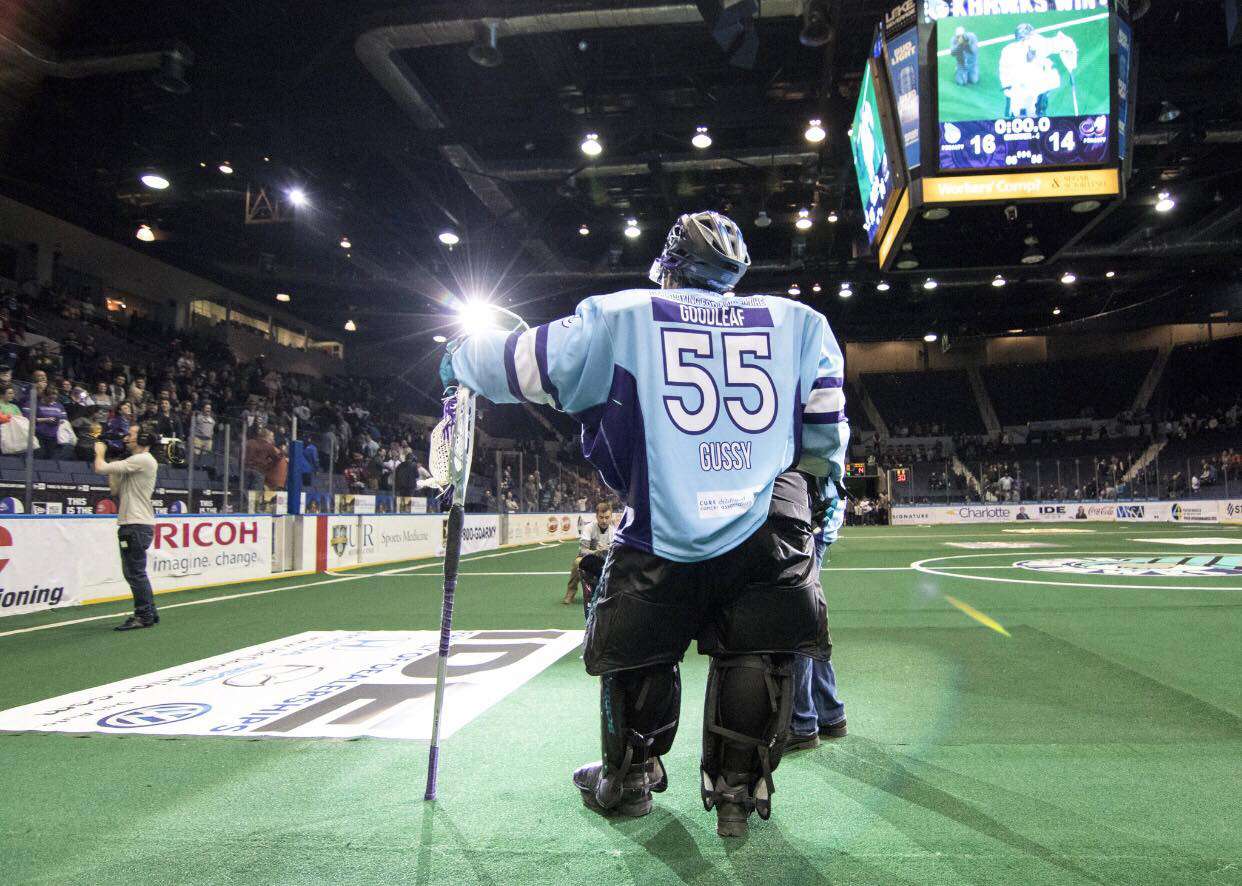 Down in the second, coach Mike Hasen called on Kahnawake’s Gussy Goodleaf  to do his thing between the pipes, as part of the Rochester Knighthawks come-from-behind win against the red-hot Colorado Mammoth. (Courtesy Ward Laforme, Rochester knighthawks)

After Colorado Mammoth Stephen Keogh scored his second in two minutes to pull ahead of the Rochester Knighthawks 8-4 Saturday, coach Mike Hasen looked down his bench at Angus “Gussy” Goodleaf and gave him the nod.

Goodleaf let a Brad Self shot past him early, but then he got to work between the pipes, as the Knighthawks fought to pull the team past .500 and top of the Eastern Division standings, as the NLL season goes into its final stretch.

Down 10-5, Goodleaf locked in, and the Rochester offense started firing. Cory Vitarelli scored at the 6:50 mark and was followed by rookie Eric Fannell, Joe Resetarits, and defencemen Ian Llord and Graeme Hossack.

The game was then tied at 10s.

The two teams went back and forth before Iroquois National Cody Jamieson put  Rochester up 15-14 at 13:13 of the fourth, which proved the game-winner. Rookie Austin Shanks added one for comfort.

“Any win this time of year is a big win,” Goodleaf told The Eastern Door. “It was nice having some family make the trip out to catch the game.”

Coach Hasen was impressed with how Goodleaf, back up to Matt Vinc, was able to perform when called upon.

“He played really well,” said Hasen. “For Gussy, it’s a tough spot for him to be in just because we probably have one of the better goalies in the league. He just bides his time. His time came and he was excellent.”

The win kept Rochester at the top of the wild East standings at 8-7, as the team’s rebound from last year’s disappointing season continues. There is very little room for error in the east (see standings sidebar).

“It’s been a pretty crazy season so far in the east; might be a pretty wild finish to the regular season,” said Goodleaf. “It’s great to be at the top. It’s so close this year that next week’s standings could be completely different.”

The young Knighthawks team has weathered a crazy season, winning its first two before dropping six straight and then getting back on track.

Rookie defenceman Jake Withers and forwards Shanks (23 goals, 21 assists) and Fannell (15, 16), have all shown they’re ready for the pro ranks and sophomore Kyle Jackson (31, 27) continues to prove a potent offensive gun to watch.

“The youth movement has happened and it has propelled us to be right in the mix of things for the playoffs,” said Hasen.

“Having Cody back was a huge boost for us, and our young rookies are playing big roles on this team,” said Goodleaf. “(It’s a) huge part why we’re in the position we’re in right now.”

Jamieson blew out his Achilles tendon in 2015, and then did his ACL last year. He spoke with The Eastern Door about how happy he is to be back in the box.

“You don’t realize how much you miss it until you get back out there,” said Jamieson. “It feels great to be back on the floor again.”

Jamieson is one of the Knighthawks’ elder statesmen, who played on the team that won three straight championships before watching the Saskatchewan (formerly Edmonton) Rush (twice) and Georgia Storm win the next three. Georgia’s young, fast and deadly squad, with its cadre of Iroquois Nationals phenoms Randy Staats, Johnny Powless and Myles and Lyle Thompson, particularly shook the league up.

“Georgia definitely had a hand in getting everybody to go younger and play faster,” said Jamieson. “Georgia kind of had the changing of the guard there where lacrosse was no longer a slow set up. That’s a style I like. That’s a style I grew up playing.”

Jamieson said it wasn’t easy to part ways with longstanding Knighthawks Dylan Evans and Dan Dawson, but knew the team needed to get younger.

“You don’t like to see change happen like that, but, at the same time, you know it’s necessary,” said Jamieson. “It’s something that happens, especially in pro sports.”

The Knighthawks have an embarrassment of riches in the goalie position with both the Canada number-one (Vinc) and Iroquois Nationals number-one (Goodleaf) on the roster.

Hasen knows this, and is impressed by both netminders’ personalities, and their ability to work together for the good of the team.

“Anywhere else Gus is a number one goalie,” said Hasen. “We’re lucky that the two of them get along so well, and they both accept their roles and work well together.”

With the NLL expanding in Philadelphia and San Diego next season, however, Hasen and owner/GM Curt Styres know Goodleaf may be harder to hold on to.

“There are teams that have come fishing,” said Hasen. “With a nine-team league everybody’s kind of set in their number one goalie, but with the new teams coming through there’ll be changes in the next few years here. If we’re not smart enough to protect him, he’s definitely going somewhere to be a number one goalie.”

“I don’t see any back up goalie beating him out of a starting position,” said Jamieson. “I really hope one of the teams picks up Angus and gives him a chance because he deserves it.

“He’s worked so hard for so long, and he’s never really gotten that chance to be an NLL starting goalie, and I think he’s more than capable of doing that. Hopefully Philly, so I get to shoot on him a few times.”

The Knighthawks take the weekend off and play the 7-7 Toronto Rock next Friday.

Goal remains national placement – and beyond

A whole lotta hockey coming up