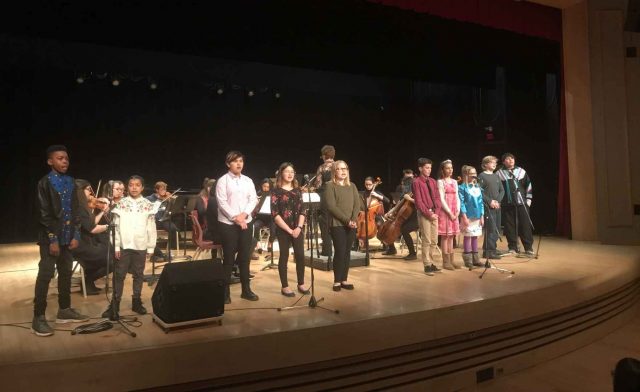 Scary but exciting was the feeling for the Dreamers before they performed in front of a full string orchestra at Vanier College. (Daniel J. Rowe, The Eastern Door)

The message St. Willibrord School found in its school anthem “Dream Child” continues to grow and resonate with young and old, professional and student, amateur and professional.

“They’re inspired by it,” said Katsi Diabo, mother of Keenan Williams, whose hip hop verse was performed live in front of a string orchestra at Vanier College last Wednesday night (March 28) with the other nine singers.

The Vanier performance was the second in the week, as the Dreamers were in Ottawa the week prior, performing their song in the halls of Canada’s parliament.

Chateauguay Liberal member of parliament Brenda Shanahan saw the anthem soon after it premiered in November. When she saw the 10 grade five and six students singing, Shanahan was brought to tears by the message.

“The children are going to school with each other, they’re friends, they have their aspirations and their dreams, and they love their community – they showed us that,” Shanahan told The Eastern Door. “They have dreams that they want to realize each personally and in relationship with each other.”

Shanahan then saw the Kanien’kehá:ka, English and French students perform the tri-lingual song live, and invited them to parliament hill where they performed.

Montreal MP Marc Miller has seen the video many times, and was sure to make his way to where they were performing when he heard they were in town.

“One of my colleagues texted me, and they’re like, ‘come up and talk to them,’ so I basically ran up in jeans and a t-shirt,” said Miller.

Prime minister Justin Trudeau was unable to attend the performance, as he was in New Brunswick, detained due to a snowstorm in the area, but has publicly praised the song for its message and quality.

Miller took the students around parliament, introducing them to senator Murray Sinclair, among others.

There remains a possibility of getting Trudeau to Willibrord in the future to see the kids perform.

The performance at Vanier in front of a string orchestra was yet another chance for the students to share their message.

Sylvie Allaire teaches string ensemble at Vanier and first heard Dream Child on CBC radio. Allaire, who’s a violinist, performed in Kahnawake at the Catholic Church with Tara Louise-Montour in the past, and was excited to revisit her connection to the community through the song.

Jin Xin Mao, 19, wrote the composition for the orchestra.

Performing in front of an orchestra was a new experience the elementary students got their first taste of.

“I am excited, but it’s scary because I’ve never performed with an orchestra with all the different sounds,” said Lexi Horn.

Shanahan expressed why they felt the song has hit a nerve with so many people across cultures.

“They just so innocently but poignantly showed us, the grown ups, what is important,” said Shanahan. “We should only do half as well. I think we should all be singing.”

Miller said interacting with Indigenous people on an everyday basis is vital for true reconciliation. The students at St. Willibrord live this reality, and show this interaction in its most true form.

“I think we’re backing into something that is really obvious when you spend any time with Indigenous people, in that most of us don’t know any,” said Miller. “We’re talking about all these concepts in a vacuum and these kids are living it… They’re doing it the way children do things, which is innocently and open-heartedly, and I think it’s really cool.”

For the parents in the audience, the Vanier performance was just another mark to be proud of as the song continues to get radio play, and the video continues to be watched.

“It’s so needed,” said Katsi Diabo. “In this world that we live in right now, there’s so much going on, and to just have little pieces of light, I couldn’t be more proud.”