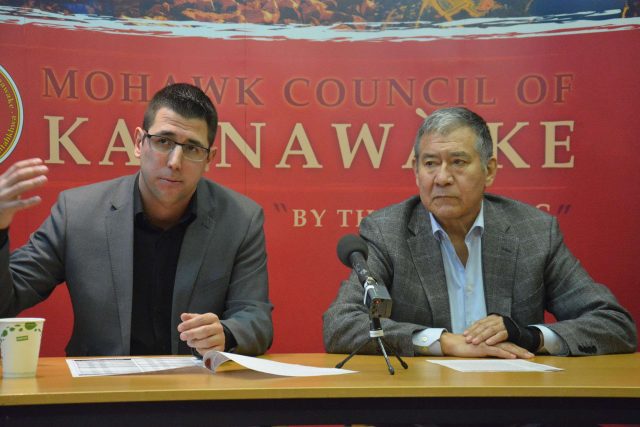 Sun continued to shine on Mohawk Council of Kahnawake budget sheets even if the sun is taking its sweet time to shine this spring to date.

Council reported an operating surplus of $1.3 million with $5.4 million going into reserves for the coming year. The surplus is around $6 million less than last year, which Rice explained was due to the one time influx of funds from the Continent 8 sale and the favourable exchange rate for the $25 million USD paid for the company.

“It’s been a prosperous year, and we’re looking forward to more prosperity as time goes on,” said Norton. “We have a number of different initiatives that we’re working on at this time.”

One such imitative is expanding the local gaming industry to include electronic gaming devices that should, barring major incidents, increase revenue on next year’s budget sheets.

For two years in a row, managers in the MCK departments did not need to cut costs like they had in years past.

Rice explained that the true cost of running the entire MCK operation is $40,606,086, while revenue growth from Mohawk Online (generally $1-$2 million each year), annual payments from the Continent 8 sale in 2016 ($8 million over five years), and other ventures has increased the income to $45,985,643.

Mohawk Online was launched in 2015 before Norton was re-elected grand chief, and has continually made money for the MCK.

Increasing domestic revenue has been the goal of council for the past half decade, and the bottom line is beginning to reflect that.

“Those two make a significant difference in growing our top line revenue, and now we can look forward to a long-awaited growth phase in the community, where we will have the money to allocate to areas that can really benefit the well-being of our community members, and we’ll be able to grow our operations and services to ensure that.”

None of the base $25 million (USD) council and Tewatohnhi’saktha received for Continent 8’s sale has been used to date. It, according to Rice, has been allocated to a separate investment group tasked with growing the money through long-term investments.

Norton explained why council hosts a news briefing to speak about the budget, and publishes it.

“It’s part of our transparency program, if you want to call it that, to be open and direct in terms of your funding – the public of Kahnawake,” he said.

“We try to present as clear a picture as possible, and if there are any questions or comments or concerns that are raised today, as well as within the community itself as time goes on over the next week or so, or month, questions that may come in terms of what we’re involved in, what we have done or where we are going – then we’re open to that.”

Rice said he expects surplus budgets to continue for at least the next three to five years.

“We’d like to keep this good story going, so now the focus has turned to how do we allocate, how do we invest, and what are the best places to ensure the community sees the most impact?” said Rice.

Norton is happy to see the funds increasing from when he was first elected.

“When I was first elected at the beginning of this term, I wouldn’t say it was terrible circumstances, but since that time I was reassured that we were going to get out of this in one way or another, and that’s what happened,” said Norton. “We moved up, and we’re now into a surplus, and generating a good revenue.”