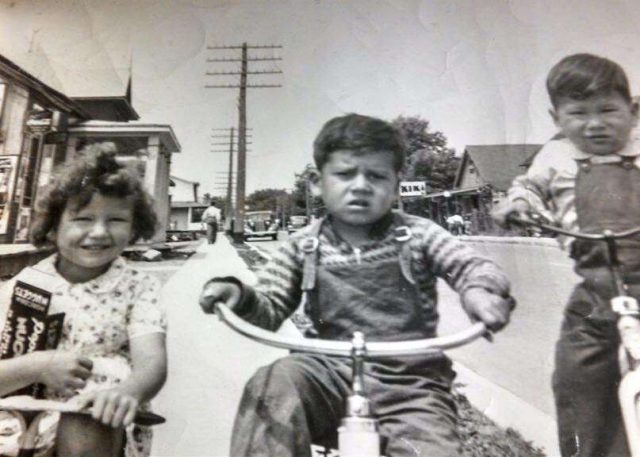 Mavis Jacobs (left) insists that her and her brother Melvin “Timber” (right) and cousin Rodney Jacobs (middle) were not up to no good as they cruised the Old Malone Highway on their bikes. Though older, Mavis for some reason did not get the bigger bike. (Courtesy Terri Thomas)

This week’s Blast from the Past photo recalls those days, and was shot directly in front of where the Kateri Memorial Foundation now is, the family’s former home.

“There used to be a store in there,” said Mavis. “Our candy store, our baloney store.”

Though Mavis is older than the two boys, she is sitting on what is clearly the smallest of the three bikes.

“I’m the oldest one in there, and I got the smallest bike. Why is that?” laughed Mavis. “Even my brother at the other end, it was too big for him. I think my father had to put blocks on there. He couldn’t reach it. That was our bike, one bike.”

The two used to try to get dibs on the bigger bike.

Mavis and her brother bounced between her two grandparents’ houses in the area, and remembers a story involving one of her Totas, Mary Deer-Cross (married to John Cross-the-River), and the store full of treats the kids would buy when they found money.

“She was nowhere in sight in the kitchen,” said Mavis. “I saw money on the floor, I knew it was paper money, so I went to this Pete McGregor’s store, and I went to put the money on the counter. I said, ‘I want a penny candy,’ so her (Pete’s wife Yvonne) eye got big, and she said, ‘where did you get the money?’ So I said, ‘at my ma’s.’”

Yvonne yelled to Mavis’ mother (Louise Cross-Jacobs) next door, who heard, came to the store and asked where her daughter got the $10, not a light sum in the 1930s and 40s.

“She took my hand, and we went back to my grandmother’s,” said Mavis. “My grandmother was on her hands and knees on the floor looking for the money.”

Mavis figures wind must have blown the money from a windowsill onto the floor, which she picked up.

Mavis was forced to fess up that she had taken it without finding out who the money belonged to, and give it back, sans candy.

Her grandmother then explained that when you see money in the house, it’s not yours.

Mavis and her brother spent time between her two grandparents’ houses in the area.

Tom and Louise Jacobs lived next to the store.

“When you’re in trouble, you go to the other one,” said Mavis.

Mavis insists that although the trio may look like they were up to no good in the picture, they were simply enjoy a nice day of bike riding.

“We were not looking for trouble,” she joked.

Mavis thinks it was her mother who took the picture. Her brother passed away last year, but she remains close with her cousin Rodney, who lives in Detroit and calls regularly.