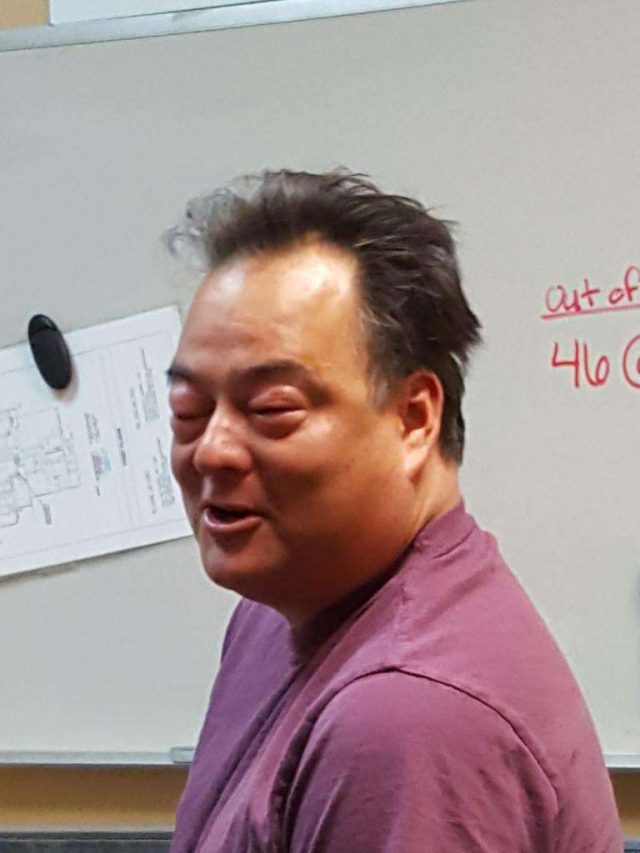 A snack turned into a trip to the hospital for PK Clint Jacobs, who now needs to carry an EpiPen should another allergic reaction occur. (Courtesy Clint Jacobs)

Last Friday, a morning snack took a dramatic turn for the worse for Kahnawake Peacekeeper Clint Jacobs after a severe allergic reaction landed him in the hospital with his eyes swollen shut.

“I had a hard boiled egg, and started eating carrots, and I had grapes just to put off hunger, and my eyes began to get itchy,” he said. “I thought it was just a normal slight allergy to something. I really didn’t think anything of it, but it started to increase.”

Jacobs washed his face, and put a cold compress over his eyes, but began feeling a burning sensation on his skin grow.

“And, like, sand under my eyelids,” said Jacobs. “It eventually got more painful, and I decided maybe I should get somebody here (at the station) because I’ve seen these types of reactions throughout my career.

“As I was sitting in front of the dispatcher, my eyes got steadily worse until I looked like a goblin or a gremlin after 15 minutes,” said Jacobs.

The ambulance arrived and EMTs gave Jacobs an EpiPen shot, keeping a careful eye on his airways, which remained unclosed. At the Anna Laberge Hospital, Jacobs was given a shot of Benadryl and told to rest. Around four hours later, it was clear the swelling was receding and Jacobs would be okay.

Jacobs developed a sensitivity to poison ivy when he moved to a more wooded area on Diabo Farm Road, but had never had allergies to food in the past. He has an appointment with an allergy specialist upcoming, but still does not know what he reacted to.

“It’s grapes, eggs or carrots, but I’ve eliminated eggs because they fed that to me at the hospital when they weren’t supposed to,” said Jacobs with a laugh.

Jacobs’ reaction, though extreme, did not affect his airways or send him into anaphylaxis shock.

According to a Research Institute of the McGill University Health Centre study in 2016, anaphylaxis attacks are on the rise in children. The study found that trips to the ER between 2011 and 2015 doubled based on data collected from the Montreal Children’s Hospital of the MUHC.

Kwaronienhawi Jacobs-Diabo is very familiar with the children’s hospital, as her and her husband Jeffrey Diabo’s two-year-old son Rotkwenionhatie Diabo suffers from severe allergies to sesame seeds and mustard.

He also has chronic urticarial (a kind of skin rash) and angioedema (swelling of the lower layer of skin and tissue just under the skin) that causes symptoms similar to allergic reactions.

“Beyond stressful,” said Jacobs-Diabo about dealing with her child’s conditions. “It’s like a full-time job keeping him alive and healthy. It’s honestly terrifying, the fear of losing him over something everyone else can touch.”

Jacobs-Diabo has been collecting information and reaching out to others to set up an allergy support group in the community to assist newly and already diagnosed families that are trying to cope with their children’s allergies.

“As a mom to a child with numerous allergies, I found there were only web-based information sources or specialists with limited time to help and ask questions,” she said.

As part of the group, Jacobs-Diabo hopes to set up allergy-friendly cooking classes, help participants find safe and alternative foods, and read labels properly, as well as giving EpiPen training and advising how to avoid cross-contamination and to decontaminate.

She hopes to collaborate with organizations in the community such as the Kahnawake Fire Brigade, the schools and daycares, as well as national organizations like Food Allergy Canada, which published the McGill study.

“I want to see what other families and parents want to know, learn, etc.,” said Jacobs-Diabo.

Dawn Lazare is the nurse at Kateri School and Kahnawake Survival School, and she gives training to all teachers, volunteers, staff and bus drivers before the year, on how to recognize anaphylaxis and treat it.

“Part of the policy includes having the students’ pictures posted, so people know who has allergies and what they’re allergic to.”

Peanuts are banned at schools due to severe reactions from those with allergies. KSS has eight students with severe allergies that are required to carry EpiPens, while Kateri has six, for example.

Lazare knows of quite a few people who develop allergies as adults, much like Jacobs seems to have with his recent reaction.

Jacobs’ daughter Shawnee was answering phones at the front of the station when dispatch called her and told her to come to the back. She thought maybe she had redirected a call to the station incorrectly, and someone was injured as a result.