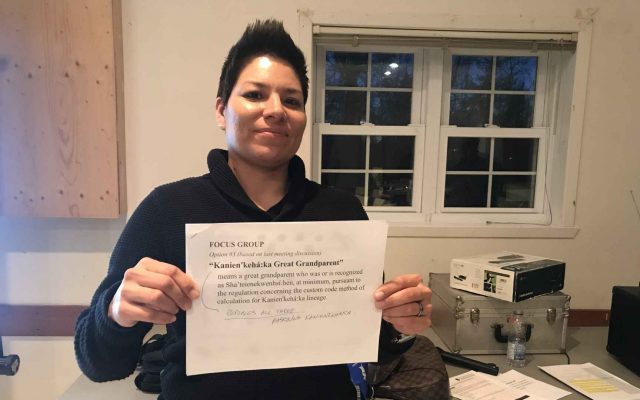 The Kahnawake Membership Law entered the second hearing phase of the Community Decision-Making Process on Tuesday, with a dozen community members in attendance. (Jessica Deer, The Eastern Door)

Coming up with a definition for Kanien’kehá:ka great-grandparent was priority number one as the Membership Law started the second hearing phase of the Community Decision-Making Process this week.

Just over a dozen community members were in attendance for the hearing, which took place on Tuesday evening at the Legion.

“We’ve debated over countless meetings a lot of the topics and I think what we’ve come up with is a solid draft for the newly-named Kanien’kehá:ka of Kahnawake law,” said Kahsennenhawe Sky-Deer, membership portfolio chief.

The definition was something debated heavily during the first hearing phase.

“This is one of the most pivotal parts of the law as we know it evolved away from blood quantum to say that the applicant has to have four out of eight great-grandparents in order to be eligible as a Kanien’kehá:ka of Kahnawake,” said Sky-Deer.

During past consultations, many participants who expressed their opinion on the definition wanted to include blood quantum criteria and went back and forth trying to settle on a percentage.

Others felt there shouldn’t be blood quantum whatsoever, but still felt the original proposed definition that included criteria of “some Kanien’kehá:ka lineage” was too vague.

The discussion lasted five meetings before participants settled on a definition that required an applicant’s great-grandparent to be considered at least “sha’teienekwenhsí:hen,” a term in Kanien’kehá:ka that translates to half blood.

“When the technical drafting committee brought the law back and showed the registrar, we said how would we apply this definition and she said it’s still subject to interpretation. What does that mean?” said Sky-Deer.

Wanting to avoid having more meetings spent debating the definition at length, the Membership Department issued a call on February 26 for participants to attend focus groups tasked at brainstorming alternative definitions.

On Tuesday, Sky-Deer presented one alternative “a great-grandparent who was or is recognized as Ahsén:nen, at minimum, pursuant to the regulation concerning the custom code method of calculation for Kanien’kehá:ka lineage.”

Ahsén:nen means half in Mohawk, and was suggested by an elder as a way to avoid referring to blood.

“The concern we have is that it can be defensible as a law. It’s one thing to say that the term sounds better, but will it stand up in a court of law?” asked facilitator Joe Delaronde to the participants.

It wasn’t a concern to those in the room. Consensus was reached on the definition about an hour into the meeting.

Proposed amendments to the law’s preamble, purpose, and jurisdiction were also passed with consensus.

Six of the definitions passed with no changes, while minor additions were made to two for clarity. Two items were also deferred and will be added to the agenda for the next meeting on April 3 at the Golden Age Club.